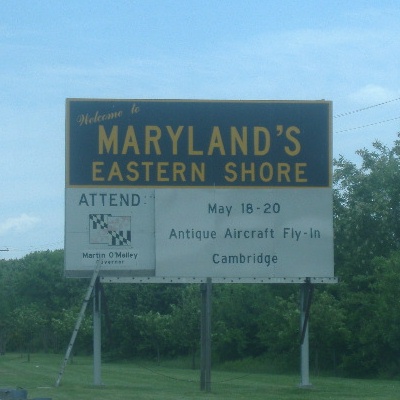 For the first time, the Carnival of Maryland moves to the east side of Chesapeake Bay. Now, I’m not a native of the Shore, but as my adopted home area I’ve become pretty militant about our role in the Free State. Far from the “outhouse” (as onetime Governor William Donald Schaefer referred to us), we’re the vacation destination of thousands (Ocean City), chicken farmer to millions (the Perdue chicken empire is based in Salisbury), and hub to an area stretching from Wilmington to Norfolk. Just remember, you pay to come into the Eastern Shore but you’re free to leave!

I chose to do this particular carnival edition because I was the 7th website to be added to the Maryland Bloggers Alliance, which now is up to 29. In June I’ll be a member of the MBA for a full year and I think being in the MBA helped my website get noticed and start the growth in readership I continue to enjoy. But I’m still the lone representative of the Shore in the Alliance so in putting together Carnival of Maryland 7 I asked for the bloggers who inhabit my area to submit their best stuff and I promised to focus on them.

I’m going to start with probably our area’s most controversial (and, due to that, most read) website. In “So Tell Me, Exactly What Is It Barrie Tilghman Is Trying To Hide?” Salisbury News digs into a local controversy involving our beloved morning radio host Bill Reddish of WICO radio and a recent interview he did with Salisbury City Council president Louise Smith. The subject of the post is Salisbury’s mayor Barrie Tilghman, a frequent target of author Joe Albero, and her input on this imbroglio. Even though Albero actually lives a stone’s throw into Delaware, his website focuses pretty strongly on Salisbury-area issues so it’s a natural to be included here.

As is the case almost anywhere you go, what happens to our tax dollars is a prime subject amongst our local writers. On ShoreThings, a case is made for repealing Wicomico County’s revenue cap with the post “66,000 Square Feet vs. Revenue Cap”. While I’m personally in favor of the cap, I’ll admit I wasn’t here for the whole campaign regarding it because the cap was enacted after a vote in the 2002 election and I only arrived on the Shore in 2004.

Another blogger from that “city too big for one state”, Delmar, is Karen from A Woman’s Point of View. Unlike Joe Albero, she lives on the Maryland side of the line and has a relatively new blog. In her contribution, Karen talks about the generational impact of one of my favorite subjects in Sports at the Beach. She’s an enjoyable read whether she talks about baseball or not.

Billing himself as “a spritual being having a human experience”, the writer who goes by Oceanshaman heeded my call for submissions to the nth degree, sending me three. While it’s not generally writing of a political nature, I think he’s pretty talented putting pixels to screen and his posts on marriage, being “in the moment“, and men of conscience are certainly representative of his talent. He does touch on politics to some extent in the latter post. If you read through monoblogue you’ll see where I have issues with my Congressman.

But for Carnival of Maryland 7 I’m choosing to submit a post that I started back in February; then revised and expanded on knowing that I’d host this Carnival and the focus I wanted it to have. In “An Eastern Shore blogging narrative” I look at some of the characters and issues that make our little corner of Maryland interesting in the world of the internet.

I also knew I could count on submissions from the other side of the Bay Bridge as well, as several of my MBA brethren got their posts in for inclusion in this semi-weekly focus on the best of Free State blogging.

It begins with the aptly named Pillage Idiot. No, I’m not talking about Atilla himself, I’m talking about a collection of idiots as he illustrates in “Maryland repeals the law of supply and demand.” To keep on an Eastern Shore theme, I’d like to point out that, of the three Eastern Shore legislative districts (36, 37, and 38), only one Delegate/Senator voted for this bill out of our 12 – the other two Democrats crossed party lines to vote no.

While Salisbury has its share of crime and controversy, another Maryland city with a female mayor makes us look good in that regard. Wade at Politics, Hon takes an in-depth look at Baltimore’s many problems with his post “Sheila Dixon’s 100 Days of Bloodshed“. Some things just don’t change regardless of who’s in charge and it’ll take more than a mayor to effect change in one of America’s most dangerous cities.

Enough about politics. I commented earlier regarding Karen’s post that baseball is a favorite subject of mine. As an example for those of you unfamiliar with monoblogue, I post every Thursday during the season about a player on our local team, the Oriole-affiliated Delmarva Shorebirds, calling it my Shorebird of the Week. David the Soccer Dad similarly takes some time to comment on the woes of Maryland’s major leaguers in “Wright is the wrong excuse.” Indeed, after a decent start the O’s have fallen on some hard times but aren’t out of the AL race quite yet.

Something that we on both sides of the Chesapeake share is an appreciation of the beauty of our state. So to wrap up this excursion called Carnival of Maryland 7 I’ll point to two women who take some time to comment on the natural side of Maryland. First, The Ridger shares with us “What’s happening in the park” from her blog The Greenbelt. In her comment when she submitted, she was worried about being too late but she was just in time and I’m glad to share her pictures and commentary. And Julie of Pines Above Snow talks about the impact reading one book (and of the person who suggested it) had on her life in her post “Books by the Bay.” She and Oceanshaman should really get to know each other, they seem to me two peas in a pod in their writing style.

Being that this is the first time I’ve hosted a carnival, I was worried about how many submissions I’d get. However, I got to the number I envisioned as being a successful effort (figuring between 10 to 15 would be good) and it worked out nicely split between both of our shores. So it’s been an enjoyable experience to do this, and I can let the remainder of the MBA folks who tend to run the Carnival of Maryland that I’ll be happy to share my space on an occasional basis with them.

So now you’ve been exposed to the Eastern Shore, and like many here say, once you get the sand in your shoes you don’t want to leave. I encourage you to add some of these local (and not-so-local) websites to the list of those you regularly read.

8 thoughts on “Carnival of Maryland 7”