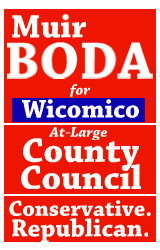 If you have only one vote in the Republican primary for County Council at-large here in Wicomico County, make it count. Vote for Muir Boda.

This year’s at-large County Council election is unique in two respects: first, it features two candidates who have already served four years on County Council in John Cannon and Matt Holloway. Secondly, unless there is a strong write-in campaign, a Republican is assured of winning at least one of the two seats because the Democrats only fielded one candidate, Salisbury City Council member Laura Mitchell.

To me, Cannon and Holloway are akin to peas in a pod. Both have earned the reputation as being the moderate Republican swing votes on a Council which desperately cried out for conservative leadership. Obviously one of them has to be nominated since there are two slots, but the winner between those two is not nearly as important as making sure Muir advances to the next round.

I’ve known Muir since before he first ran for office five years ago, and he’s always impressed me as earnest, down-to-earth, and willing to work hard to solve problems. I was happy to vote for him as one of my endorsed City Council candidates in 2011 (had I lived in the city in 2009, he would have received my vote that year as well) because I believed he would add a voice of sanity to the body, and with a County Council that will feature a lot of new faces – including at least four new members since Gail Bartkovich, Bob Culver, Stevie Prettyman, and Sheree Sample-Hughes are departing for retirement or for other offices – having someone with his understanding of the working man’s perspective will be important.

Crime is Muir’s biggest issue, and for good reason: he sees it on a daily basis as part of his job. Boda is a believer in the High Point Initiative, which is being instilled by Matt Maciarello and other members of the law enforcement community, but would like to take it further with another unique idea worth considering and discussing.

As many know, Muir ran for Congress as a Libertarian in 2012, and served for several years as an officer in the Maryland Libertarian Party. One might consider him an opportunist for changing to the GOP for this election, but as for me I see this as a welcome change. We need new, younger blood in the local party and this is one opportunity to put a good, thoughtful conservative on County Council. He and District 2 candidate Marc Kilmer can be the building blocks to a conservative rebirth in Wicomico County, but the hardest step will be his getting through the primary with two opponents who certainly have more of a bankroll than Muir does.

But it can be done, with your help. Let the chips fall where they may for slot number 2, but let’s make sure Muir Boda makes the November ballot – even if you have to “bullet vote” and leave a choice blank.

Oh, and just to answer the question surely to come: this is a personal endorsement, and not one with my Central Committee hat on.