There’s not a whole lot I can add to this except comment on the unique aspect of the presentation.

But the Club for Growth recently came up with a list of talking points advocating the defunding of Obamacare. In and of itself, that’s not unique, but the facts are presented as a cutout card suitable for inclusion in “your wallet, purse, pants pocket, etc.”

Yet in theory, this could be something passed out by like-minded groups at your typical county fair, festival, gathering, or the like. All someone has to do is make up enough copies to distribute. 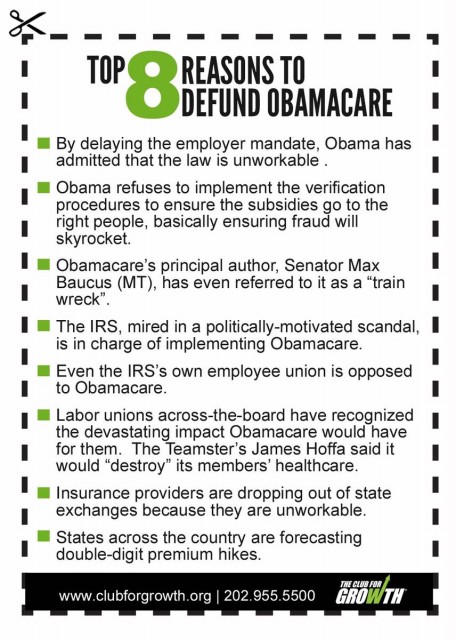 Each and every one of these is pretty valid in and of itself, but taken as an octet they are quite compelling.

Meanwhile, the state of Maryland is trying to blow sunshine up the skirts of unsuspecting residents by claiming our insurance premiums under Obamacare will be lower than most states and most previously uninsured will qualify for tax credits to make up the difference. (Nice income redistribution if you can get it.)

Yet the study has some glaring weaknesses; for example, only a handful of states are included. Delaware, Pennsylvania, and West Virginia aren’t among them, so we don’t know if our closest peer states are getting a better deal. With the exception of Ohio and Virginia, the states involved are similar to Maryland in that their exchanges are state-based.

The Maryland Health Connection study – in essence, the state government studying itself – also crows about how the state’s Insurance Commissioner reduced the rate increases sought by insurers by up to 50 percent. In other words, they once again made it more difficult to do business in Maryland as insurers will soon find the state unprofitable.

Let’s face facts: the state is doing this for one reason and one reason only: to convince young and healthy individuals they need to buy insurance rather than pay the tax penalty. Good luck with that, especially at $1,368 a year.

It seems to me that rates would go down if the state would eliminate its mandates for basic coverage, but every advocacy group under the sun would bitch and complain that their pet disease is being slighted. So rates will either have to increase, or insurers will cede the field. Neither is a good choice, but that’s where we are going; meanwhile, those who qualify for the subsidies won’t see the end effects because the money won’t come from their pockets directly, or if it does they’ll just get a larger tax refund and believe they’re hosing the government when the joke is on them.

It’s a brave new world out there, and I get the feeling Obamacare will be every bit the predicted “trainwreck” and more unless it’s defunded.