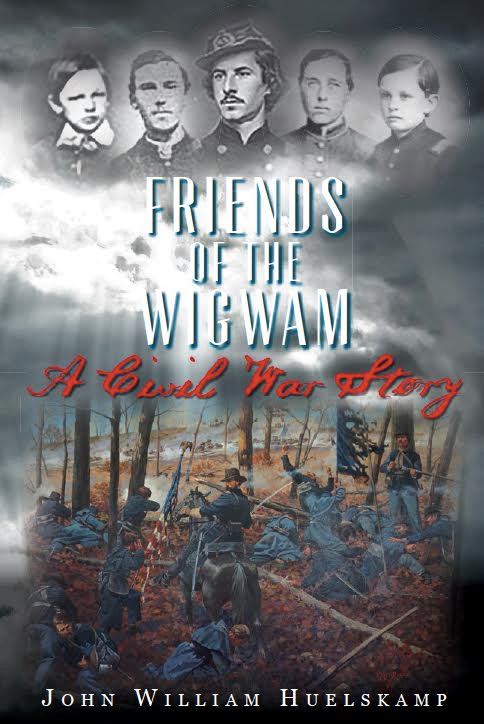 The Pecatonica River meanders its way across the northern section of Illinois as it works its way out of Wisconsin,  slowly winding toward a junction with the Rock River west of Rockford. One would think that a stream hundreds of miles away from the action couldn’t be worked into a Civil War story, but author and historian John William Huelskamp succeeds in making this corner of Illinois a key player in the events surrounding the conflict. (Of course, it helps that the Commander-in-Chief at the time as well as the victorious Union general were both connected to that corner of the state in the years preceding the war.)

Huelskamp opens the tale by transporting us to the banks of the Pecatonica in 1857, introducing us to 16-year-old Will and 13-year-old Aaron as they discover the wigwam of the title along its banks. But the action doesn’t just occur there – in scenes around the region, from Chicago on the east to Galena on the west, we are introduced to a number of characters whose lives will eventually be intertwined in and around the conflict. The story moves quickly through a number of historical guideposts that set the stage for what’s to come, with some of the most interesting pieces being those where Abraham Lincoln is convinced to run first for Senate against Stephen Douglas and later for President as a Republican, with a band of supporters that came to be known as the “Wide Awakes.”

But the wigwam was the stage over the next two years to six major characters who became the friends of the wigwam – Will and Aaron, the 15-year-old tomboy Allie, the teenage sharpshooter T.J. Lockwood and his portly fisherman friend Patrick “Trick” Kane – who become part of the pact thanks to a rare errant shot from T.J. – and Allie’s 14-year-old friend Jenny Putnam. They come of age as the nation lurches closer to war, with the boys eventually joining the 93rd Illinois Regiment being recruited in the area by Jenny’s father Holden Putnam.

In truth, this book could have easily been subdivided into two parts, as the onset of war changed both the tone and the pace. The second portion opens with Elmer Ellsworth,  a “friend and brother” of Allie’s – who she had teased about “actin’ so stiff and stuffy” in his military drill uniform at the Lincoln-Douglas debate a few years earlier – becoming the first casualty of the rebellion as he was ambushed taking down a Confederate flag from a hotel in Virginia, just across from Washington, D.C. As the hostilities escalate, several of the men of the area become part of what was the 45th Illinois Regiment, while the boys eventually join with the 93rd being formed under Colonel Putnam in August of 1862. A distraught Allie, who has fallen in love with Will, begs them not to go, but Will calmly tells her, “Allie, it is our duty to go. If we don’t fight this war, who else will?”

As the 93rd heads south and becomes entangled in the campaigns in Tennessee and Mississippi, we find Jenny and Allie back home, mortified at the prospect of losing their friends – so much so that Allie concocts a desperate plan with Jenny’s help to check on their welfare.

There’s no question that the warfare takes its toll on those in the small towns in that region of “the Sucker State,” with many of their best and brightest men never making it home or returning disfigured or mutilated. The friends of the wigwam are not spared those fates before the story ends with a reunion of some of the survivors along the Pecatonica in 1864. Huelskamp closes the loop with an afterword revealing what happened to many of the main characters, including the six friends of the wigwam.

The beauty of Huelskamp’s work as a historian and writer is how the characters are brought to life. There are some accounts from those with integral parts of the story brought to us through the text itself, with Huelskamp providing photos of the actual documents from the battlefield. We get a glimpse at letters sent from the front, military orders as presented, and other documents that explain bits and pieces of the account he puts together.

But much of the work comes from his imagination as to how events could have taken place, even if some of them seem too strange to be true. As an example, the overall story of Allie’s journey is one which reads as complete fiction but it was eventually documented as historical fact in the decades after the war came to an end. (However, Huelskamp had to take a measure of fictional license with her to make the overall story more clear.) It takes a long time and great deal of flipping back and forth, though, to recall where some of the characters had appeared before as the different regiments and divisions work their way through the battle southward. Huelskamp takes the broad strokes of how the battles were fought and adds in a mix of fact (based on the first-hand accounts of the letter writers and correspondents) and realistic fiction to tell a fascinating story of life as soldiers who were fighting for the cause of preserving the Union.

With the book being so full of characters, though, it seems to me a few weren’t fleshed out as well as they could have. One example was the Negro boy L’il Joe, who the clan discovered hiding in the wigwam as an escaped slave before they assist him on his trek northward. Although he’s later brought up in passing, we only get his story as he reports for duty (with his father and two other family members) in a colored regiment near the end of the war and in the penultimate chapter of the book. But since Joe’s story wasn’t followed upon, it’s possible the Negro and Underground Railroad facets of the story were added as fictional tales based on the real events of the era.

In Friends of the Wigwam, Huelskamp combines all the facts and tales into a believable, riveting story that has enough twists and turns to keep you guessing how the story of each participant will end. Perhaps it’s not the best summer beach book out there, but if you are into historical fiction or relish the legends of the Civil War, you will be fascinated at how interesting the people and places of this portion of the great state of Illinois became as the War Between the States played out. Those in our region who likely learned of Maryland’s place in the war should be fans of this different perspective on history.