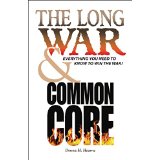 I was out weeding my flowerbeds this afternoon, which is very therapeutic. You feel like you can bring order to chaos with a little sweat and elbow grease. The satisfaction is temporary though as you know those weeds will be back quickly, especially after a good rain.

This brought to mind the book that I just finished, The Long War & Common Core: Everything You Need to Know to Win the War!, by Donna H. Hearne. The current struggle against Common Core is just the newest battle in a continuous onslaught from the progressive educational community to capture our children’s hearts and minds. Valiant parents and teachers have fought against Progressive Education in the 1930s, Secular Humanist Education in the 1950s, and Outcome Based Education in the 1990s. “All of these strategies are based on the premise of “progressive experts,” instead of mom, dad and the teacher, setting common standards for all children. And since these secular, utopian standards drive the curriculum and assessments, local control of education cease to be a reality.” (Hearne 3)

Like the weeds in my flowerbeds, these bad ideas just keep popping up. Even now several states are rebranding Common Core because of the fierce resistance from parents. But just because the name changes, it doesn’t mean that the standards have changed.

Donna Hearne is well equipped to take up the challenge of documenting the twists and turns of our academic wars in America. According to her Amazon biography, Hearne “is executive director of The Constitutional Coalition and has a degree in elementary education from Washington University, St. Louis. She is a writer, a radio talk show host for thirty-plus years, and currently serves on a local school board. From 1981-1991, she worked in the U.S. Department of Education. Appointed by President Reagan, she served on several policy-making boards, with an appointment in 1988 to America 2000, the forerunner of Goals 2000 as her last appointment.”

I attended the 26th Educational Conference hosted by the Constitutional Coalition back in January of this year. Donna mentioned her book then as she was just sending it to the publisher. Her goal in writing this book was to equip parents to understand the history of the war that they are now a part of and how to protect their children while fighting to wrench control of their schools back from the federal government.

This book is a compact 141 pages including appendices and endnotes. The goal was to make a Reader’s Digest type condensed book that would point the reader to the facts, equip them with information for further research if they desired, but to be a fast-paced quick read for busy people.

Donna was successful in this endeavor. The book is so tightly woven that it is hard to pull a quote without wanting to just keep going. It is difficult to condense it any further.

She introduces you to the big players like Antonio Gramsci, the Italian communist, who coined the phrase “the long march through culture” (Hearne 4), as well as John Dewey who reportedly said, “You can’t make Socialists out of individualists – children who know how to think for themselves spoil the harmony of the collective society which is coming, where everyone is interdependent” (Hearne 3), and our current high priest of teacher education, Bill Ayers.

She presents the Frankfurt School, a Communist think tank officially called the Institute for Social Research that was started in Germany in 1922 by George Lukacs, a Hungarian aristocrat turned communist. The Frankfurt school moved to the USA in the 1930s and 1940s where John Dewey’s sponsorship gave them access to Teacher’s College at Columbia University, the premier teaching institution in the USA. From there its graduates filled more that 60% of all teaching and educational and administrative posts in the country.

Here are a few of the goals of the Frankfurt School: “creation of racism offenses…teaching of sex and homosexuality to children…huge immigration to destroy identity…encouraging the breakdown of the family” (Hearne 40). These bullet points sound just like what we see happening all around us.

Donna addresses the problems with the science standards and the literature/history standards. “The traditional/classical liberal arts education laid down foundational truths and built sequentially, logically, and contextually on those foundations, ultimately creating an ever-widening knowledge base upon which any vocation or pursuit of life could draw upon and transition into.” (Hearne 98)

The current concept tosses out the old and teaches fractured thinking where the student is exposed to lots of information without any context. Since they cannot organize the random facts in any meaningful fashion, their brains become cluttered with irrelevant facts and the brain does not develop in an orderly way.

The examples will drive the claims home to you. If you think that you do not have to worry about Common Core because you homeschool your child or send them to private school, think again. There will be no escape for any student that wants to continue on to college because the entrance exams will be the choke point. Your student will not be able to pass if they do not conform to the standards.

Do not despair! There is a whole chapter called Solutions to help you take your knowledge and make a difference. The first Appendix has questions and answers about Common Core. This appendix is invaluable for the clear, succinct answers that you can use when talking to friends and politicians about Common Core.

Donna Hearne really did a great job of putting together a fast paced, highly readable book about an extremely important topic. If you care about fighting Common Core, this is the book to get you started.

When I talk to people about the big issues of the day, many are discouraged and feel helpless. Take heart from the weeds in your garden. They will always be there, but you are not helpless. Go pull some weeds, beat back the jungle, and see how much better you feel. Now do the same with the neverending battle over the educational system. Get educated and then do one thing with your newfound knowledge. Taking charge of your life and resisting the educational behemoth will change your attitude. You can make a difference.

One thought on “Book review: The Long War and Common Core: Everything You Need to Know to Win the War! by Donna H. Hearne”