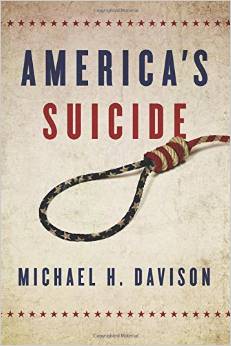 For decades there have been people convinced America’s greatness is behind her. Based on some of the evidence, though, a compelling case can indeed be made that this republic is in its final days and author Michael H. Davison believes that he both understands the problem and prescribes the cure in his new book, America’s Suicide.

As we all know, suicide is the act of taking one’s own life. It’s brought about generally out of despair, pain, or a feeling there’s no way out. In America’s case, though, this suicide is a slow-motion decline caused by the seductive message of the Left, one which tells the voter they can have it all if they allow the government to act as provider and guardian. Frequently citing the untold bloodshed of the twentieth century from tyrants such as Hitler, Stalin, Mao, and the Kim family in North Korea, Davison builds the case that continuing on our path will invariably lead to an American dictator. He closes his opening chapter by noting:

As you applaud the government white knight in his crusades to slay the evil dragon of prejudice, condemn the poisoners of air and water, champion the causes of the poor and bypassed, feed the hungry, shelter the homeless, inspire the young to correct political thinking, protect us from the greedy, punish the exploiter, regulate the manufacturer into a straitjacket, transfer your burdens to the rich, school the ignorant, heal the sick, comfort the despairing and soothe the passage of the aged, all while he basks in your adulation of his compassion and generosity (which you pretend not to notice was at your and your grandchildren’s expense)…have you been meanwhile noticing that each year you have a little less to say about what you do with your life and property?

Few conservatives would find fault with that laundry list of laments, nor his suggestion that the Left in this nation has perverted capitalism into an unrecognizable form, and in this paragraph Davison sums up much of the issue he takes with the Left. It’s an easy target, one which Davison spends much of the first half of his book painstakingly detailing.

Yet Davison also finds fault with the Right, in part the wobbly opposition of the Republican Party. As he writes:

The more that the Republican Party abandons its ostensible principles and concedes moral superiority to its opposition by adopting diluted versions of the latter’s principles, the more will Republicans lose the allegiance of men of principle.

But on the other hand, Davison continues:

Yet the more that Republicans adhere to their advertised free market and limited government doctrines, the more votes they will lose from all too numerous people threatened by principles that hold them responsible for their own well being and who consistently vote to expand parental government.

He also contends that:

Capitalism can never become a viable economic system until it becomes moral, and it cannot become moral until it stops subordinating the good of mankind to profit.

In other words, the Right isn’t completely in the right insofar as economics goes, nor does it have a corner on the moral superiority aspect. It is in this aspect that I respectfully disagree with the author, who had done an outstanding job outlining both the problem and the possible solutions up to that point.

Davison contends that morality, and particularly science, has transcended the need for religion. In that respect Davison reminds me of the objectivism of Ayn Rand, whose philosophy is summed up by noting, “(t)o embrace existence is to reject all notions of the supernatural and the mystical, including God.” As Davison sneers:

Ironically leftists and religious conservatives have at least one desire in common. Both want us all on our knees.

Yet two key objections Davison writes about are creationism vs. evolution and the belief that religious people object to stem cell research – in essence, areas where religion and science interesct and perhaps cannot co-exist. I would concede those positions are held by the extremists in Christian thought, but by and large the mainstream of Christians understand evolution as a theory and have no problem with adult stem cell research. Only embryonic stem cell research, which has been shown to be of little scientific use anyway. runs afoul of most Christian doctrine.

Contemporary man’s most desperate need is for a rational human based, instead of God based, ethical system for living on this Earth to fill the philosophical void in which we live…

Religion and morality must therefore be divorced. Our survival depends on it.

Yet while Davison has the answers for many of the other questions, he cannot lay a finger on just who or what should take the place of God, or our Creator, or any other higher power mankind feels the need to answer to. The Left has tried to replace the higher power of religion with a state-sponsored church or the state itself, but to no avail. While Davison seems to agree with Marx, who contended religion was “the opiate of the masses,” it’s worth noting that no Marxist state could completely stamp out religion as traditionally expressed, in large part due to the work of religious missionaries.

Therein lies the inherent weakness of Davison’s argument, for if a country acknowledges in its founding documents that “we are endowed by our Creator with certain unalienable rights,” it would take a radical transformation and perhaps an entirely new constitution to determine from whom these rights naturally emanate. Still, Davison wishes:

Suppose we cull from the Democratic Party that faction who holds capitalism guilty for all economic injustice in the United States, regards profit and property as theft, believes that corporations rule the nation even as they have been going bankrupt in greater numbers and fantasizes that a yet more expanded nanny state and widespread nationalizations will assure justice and prosperity.

From the Republican Party cull those who insist that their religion must trump the discoveries of science, believe in angels and devils but reject Darwin, and despite a universe full of evidence to the contrary, manage to convince themselves that the Earth came into being less than ten thousand years ago.

His result would be what he calls the Rational and Responsible American Party, with fourteen points of policy corrections he outlines near the end of the book.

America’s Suicide is a challenging book, not just in the sense of opposition to conventional wisdom but also in turgid and at times stilted prose. There are a lot of areas you may need to read a second time just to make sure you understand the point, and of all the books I have reviewed in this space it took me the longest to read and understand – thus you have a far longer review than most.

Yet the one thing it accomplishes is adding that dose of objectivism to the national conversation. It’s a book that pulls no punches and slaughters sacred cows left and right, but sometimes that’s the necessary tonic to provoke thought.