Since I took nearly 100 pictures and 36 made the final cut, I decided to make this a two-part post. 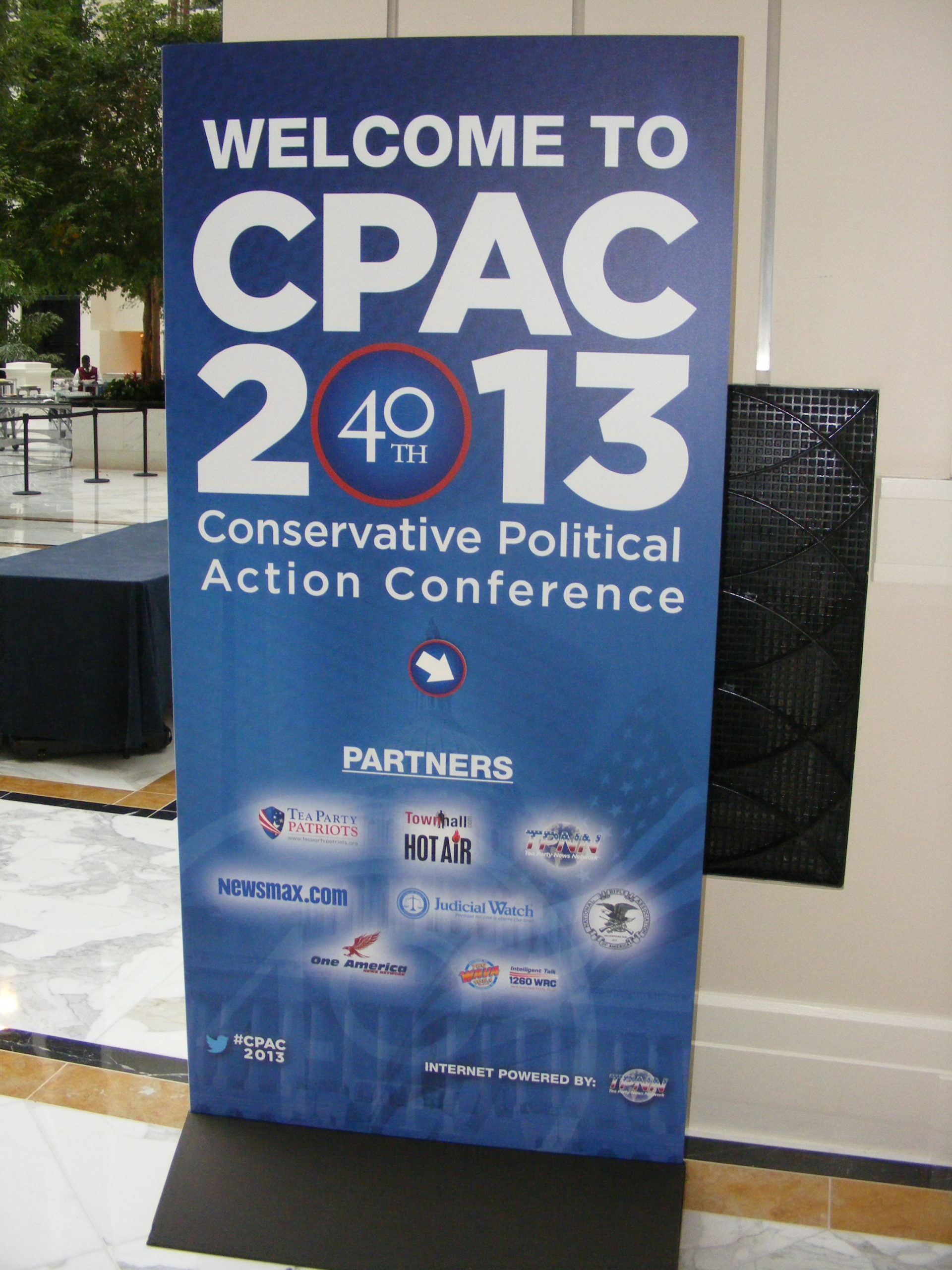 Recently having done a stint at the Turning the Tides Conference, I thought I had a little bit of an idea in what to expect from CPAC. But the entirety of the Gaylord Conference Center and the number of celebrities speaking and milling around tells me that I missed a lot when I missed the first two days of the gathering. Yet the one day I managed to be here was well worth my time in learning from and meeting those who move and shake the conservative world. 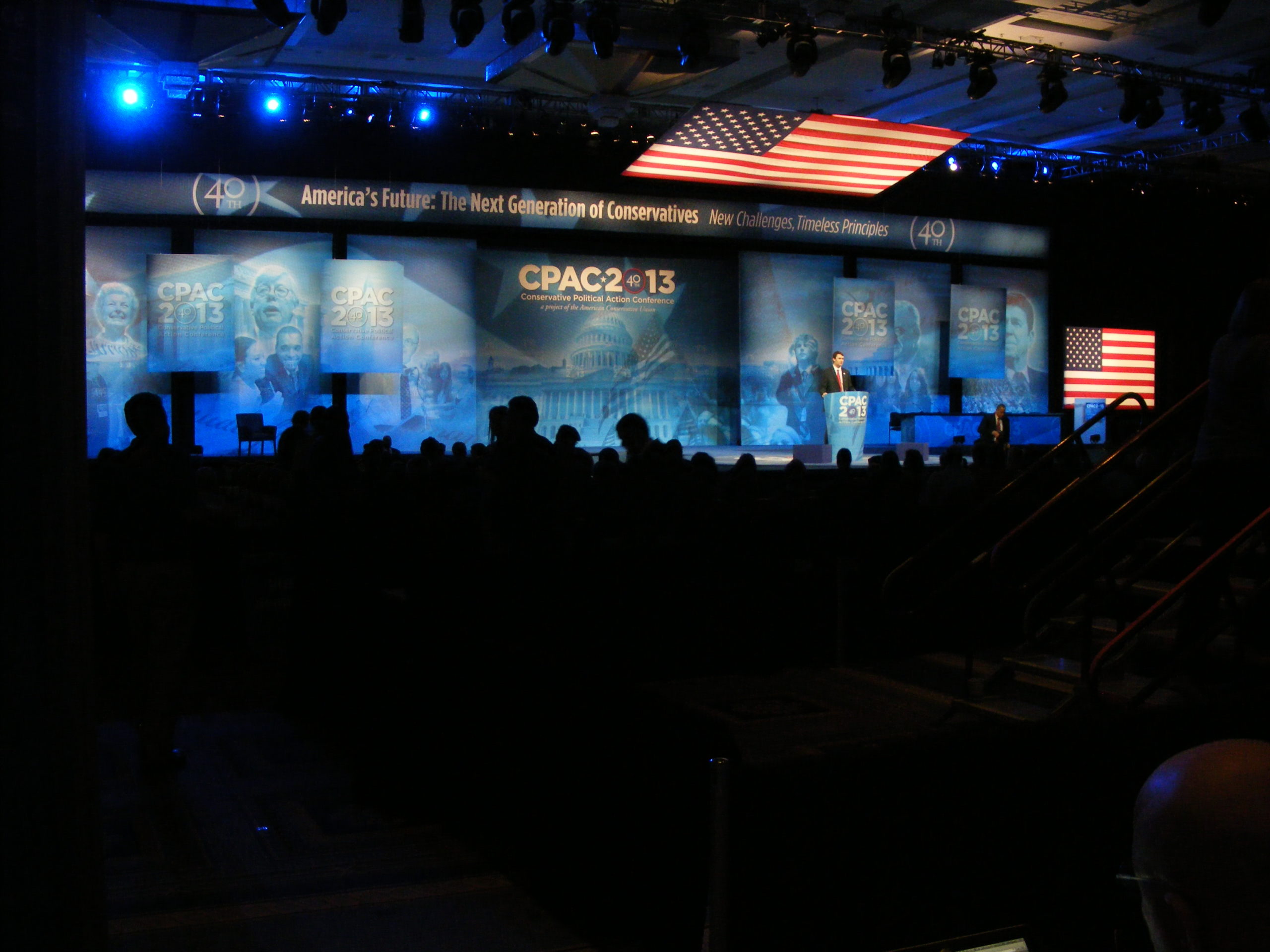 Walking into the Potomac ballroom I was blown away by the expanse of the venue. Sure, we have some decently-sized conference rooms for our 300-person gatherings for the Maryland Republican Party, but this room could hold a sporting event. If anything, the stage made the speaker look small.

The first speaker I heard upon my arrival and the recitation of the Pledge of Allegiance and invocation was TEA Party pioneer Jenny Beth Martin, who repeated the case I’ve been pleading since the most recent incarnation of the pro-liberty movement was born: conservatives are for limited government, fiscal responsibility, and a thriving free market. Instead, Martin said, they are “mocked, marginalized, and maligned.”

She also added that we’re headed to bankruptcy, with an Affordable Care Act which is “unaffordable, callous, and cruel.”

“The reality today is grim and heartbreaking,” Martin added.

Rep. Steve King of Iowa followed Jenny Beth to the podium and made the case that “Obamacare has got to go…we can’t let up.” It erodes our vitality and is an “unconstitutional taking,” according to King. He also criticized the immigration initiatives because, as King claimed, 2 out of 3 illegal aliens are Democrats “and the Democrats know this.”

King called on us to “restore the pillars of American exceptionalism…we’ve got a country to rebuild together.”

I should point out that I had pictures of these two speakers and they didn’t make the cut. But this guy made the cut. 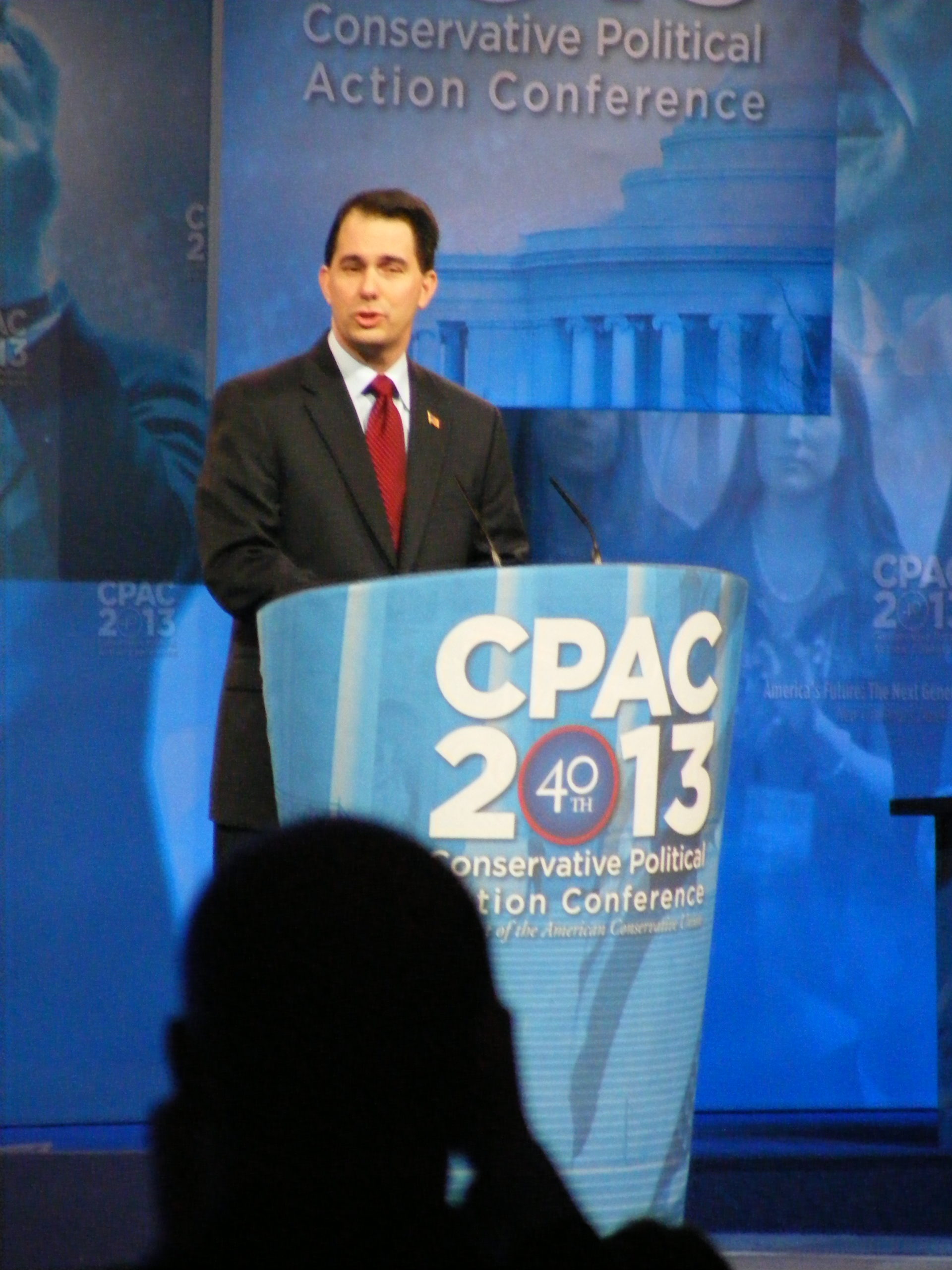 Wisconsin is a state which has a leader, said emcee Charlie Kirk, founder of Turning Point USA, and Governor Scott Walker detailed a number of ways he’s indeed led.

Harkening back to recent initiatives, Walker noted welfare reform and tax reform originated in the states. And just as the states created the federal government, the 30 states with GOP governors – most of which also have Republican-led legislatures – can improvise with good, conservative ideas. But Walker made the point that “to be successful, we have to be optimistic, relevant, and courageous.” It’s obviously working in Wisconsin, where 93 percent of the state said it was heading in the right direction. “We’re the ones who care about fixing things,” he added.

Walker was ready with a number of examples of poor policy, like the first-year Milwaukee teacher who was selected as their teacher of the year but furloughed because she was at the bottom of the seniority chain. His union reforms eliminated that problem. The overall idea, continued Walker, was to replace the narrative that a successful government was one which created dependents with one which made the case that government works when it assists people to wean themselves off dependence by making it easier to get a job.

“In America, we celebrate the Fourth of July, not April 15,” shouted Walker. “We believe in the people, not the government!” 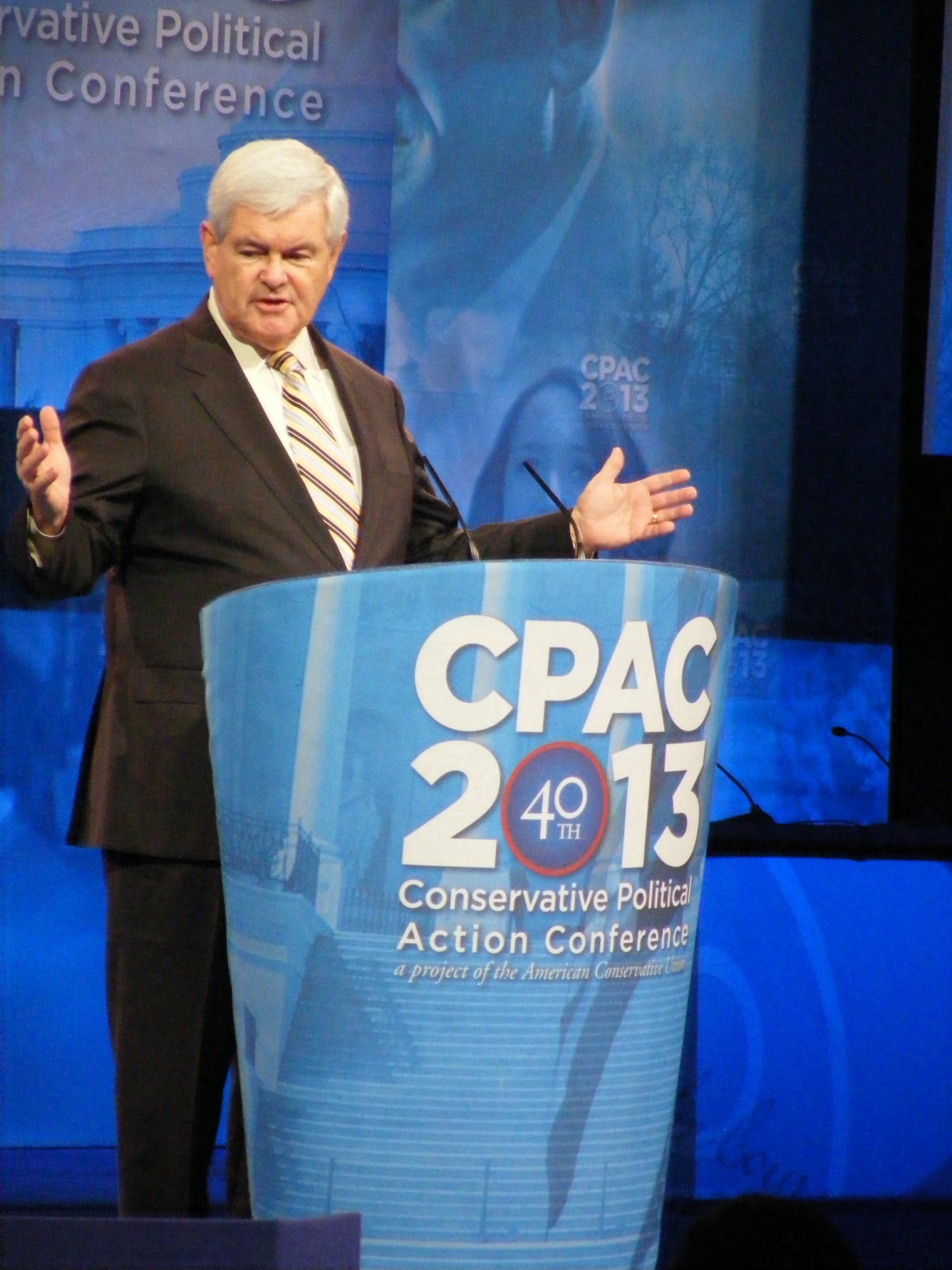 And then came Newt – a guy who only needs one name to convey who I’m speaking about.

Gingrich addressed the concept of government needing to be pioneers of the future, and get out of being prisoners of the past. As a movement our contrast with President Obama “couldn’t be more vivid.”

But he saved withering criticism for the “Republican establishment class,” which “couldn’t be more wrong.” Holding up a candle and light bulb, Newt chided Washington as “being prisoners of the past…they’re all trapped in the age of candles.” Both parties in Washington are blind to the future, though.

Interestingly enough, Newt promoted a book by a liberal author, the former mayor of San Francisco and now lieutenant governor of California, Gavin Newsom. But Citizenville was a book “every conservative should read” because it promoted a more active citizenry. Gingrich used the analogy of the Facebook game Farmville, with the idea being earning rewards for public-spirited achievement rather than planting virtual crops.

Newt also took a swipe at the establishment wing of the party, saying that since 1976 “the dominant wing (of the GOP) has learned nothing.” Nor should we be strictly the anti-Obama movement, said Newt. 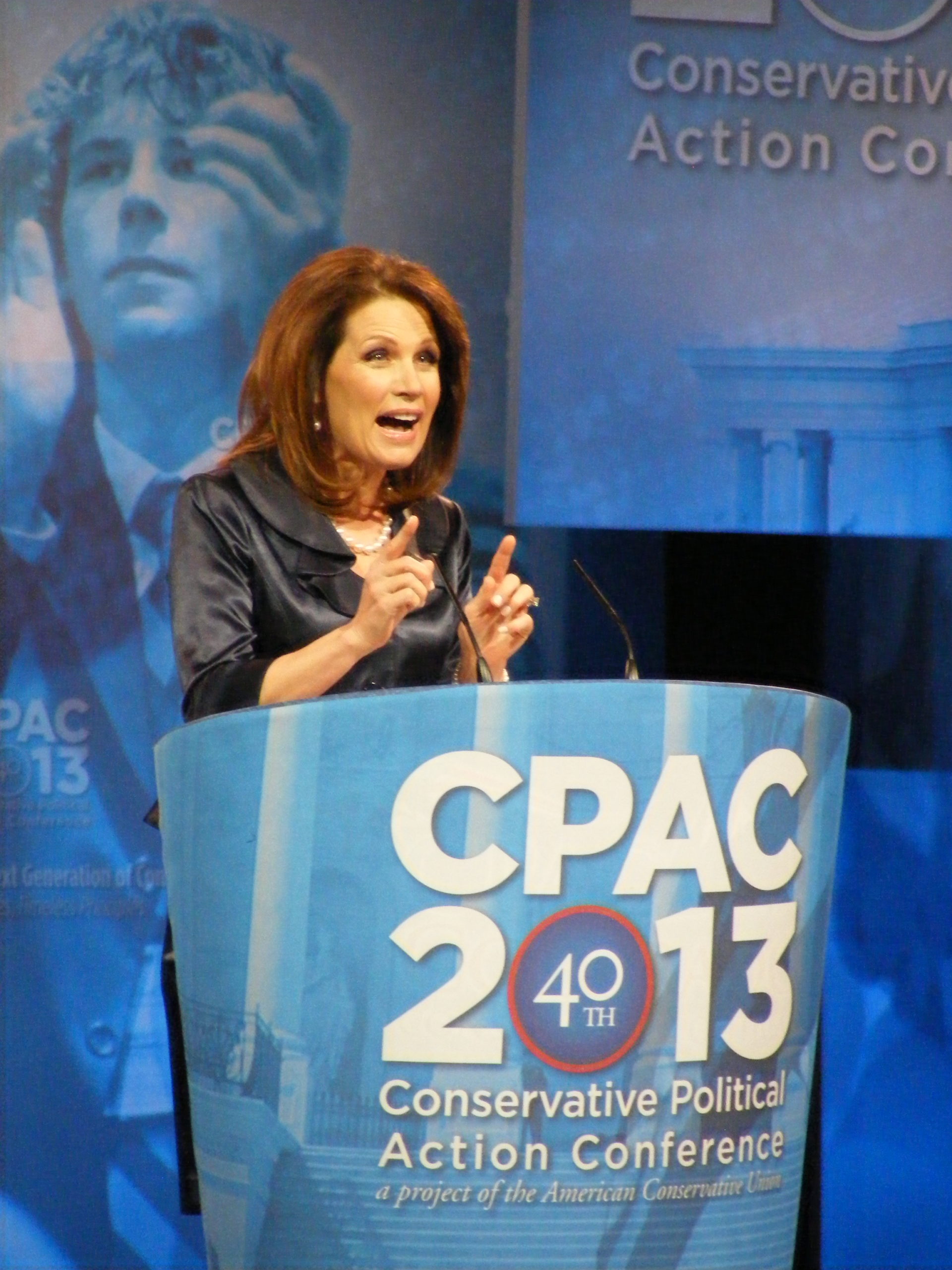 The powerful morning lineup of featured speakers concluded with Minnesota Congresswoman Michele Bachmann, the 2012 Presidential hopeful whose campaign flamed out after a great summer of 2011.

She explained about the TEA Party movement “we love people in this country…we want everyone to succeed in this country.” As key parts of that success, Michele believed there were a lot of goals we could accomplish “if we put our minds to it” such as cutting the price of gasoline to $2 a gallon, preserving our Second Amendment rights “for your sister and your mother,” and most ambitiously finding a cure for Alzheimer’s Disease in the next decade. The key wasn’t big government, she argued, but “big innovation.”

Bachamnn also chided the inefficiencies of government, pointing out that for every $10 spent on food stamps only $3 goes to recipients while the other $7 goes to bureaucrats. She also dubbed the Obama presidency as “a life of excess.”

In the hardest-hitting portion of her remarks, Michele savaged Barack Obama for the “shameful incident” of Benghazi. “This is a story of not caring,” Bachmann said. Because (Tyrone Woods and Glen Doherty, the two ex-Navy SEALs killed at Benghazi) cared, they defied orders and they chose to go to the aid of their brothers…they fought for our country.”

As the attack raged on, “they continued to radio their government begging for help,” charged Bachmann, “and that help never came.” This despite the fact President Obama knew of the attack within its first hour, she continued.

“A war was raging in Benghazi for hours, and all we know is that our President went AWOL,” she continued to a chorus of boos and catcalls for Obama. “No one knows to this day where the President was.”

Of all the Saturday speeches I heard, Bachmann’s was perhaps the most critical of Barack Obama.

After she finished, I decided to skip the next panel and head out to explore a little. I hadn’t really had the chance to walk around as I arrived shortly before the proceedings began. It was a crowded lobby to be sure. 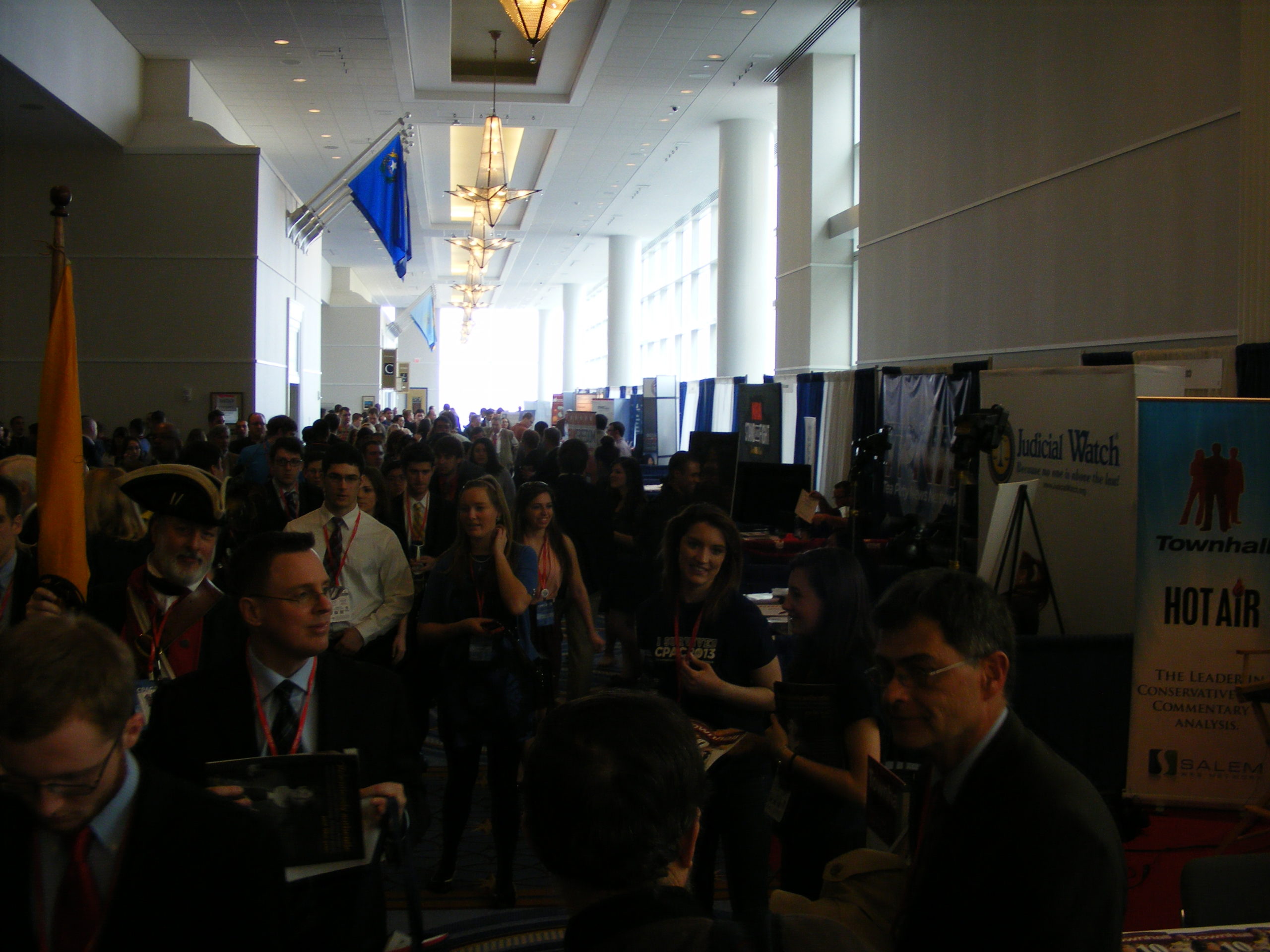 This space also featured the famous “Radio Row” I’d only heard about, although on a Saturday morning it wasn’t as busy. 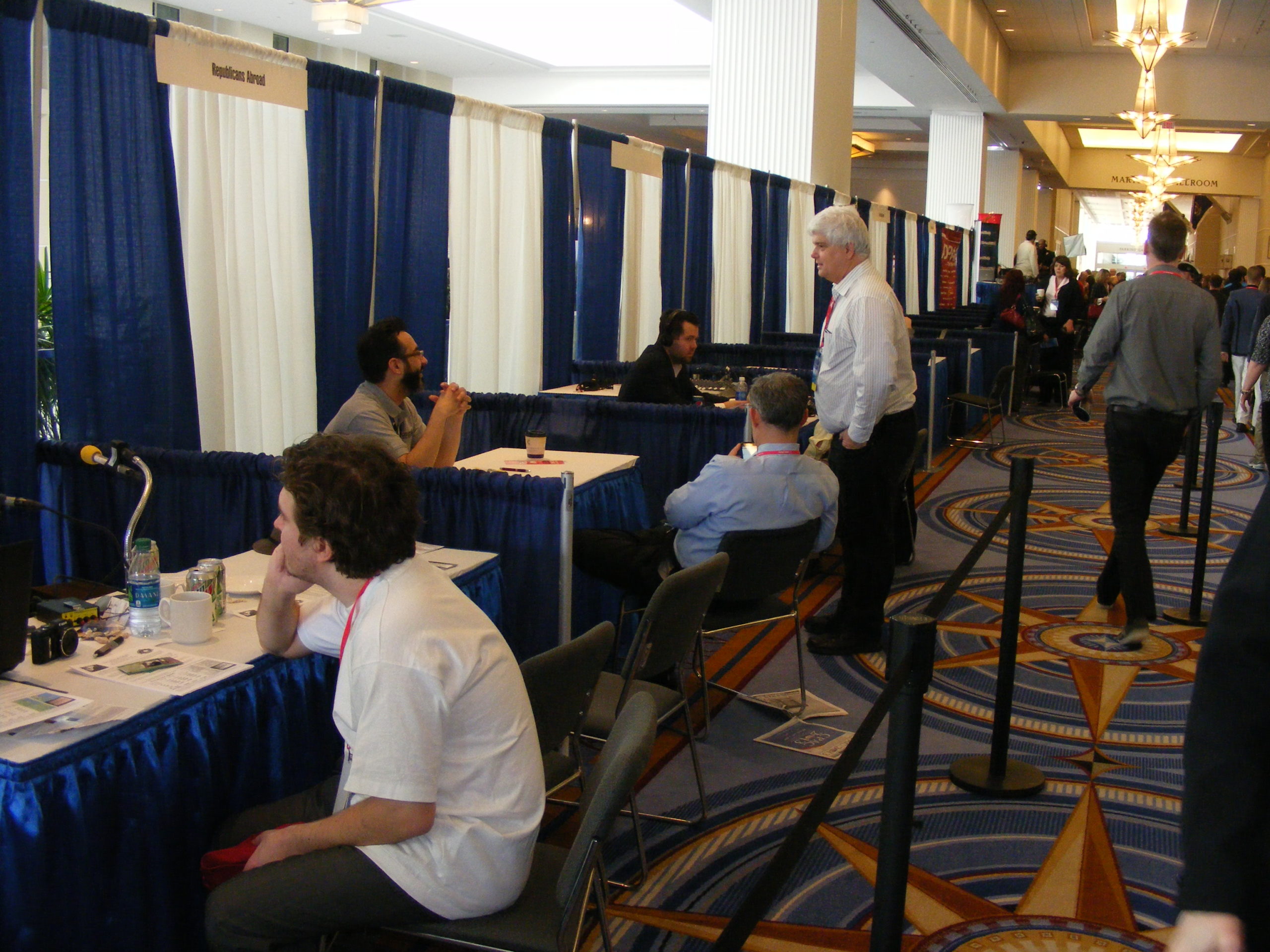 The TEA Party Patriots were busy doing a , though. (Actually, it may have been just before or just after this video was done. The blond gentleman in the background of my picture is Jim Hoft of Gateway Pundit.) 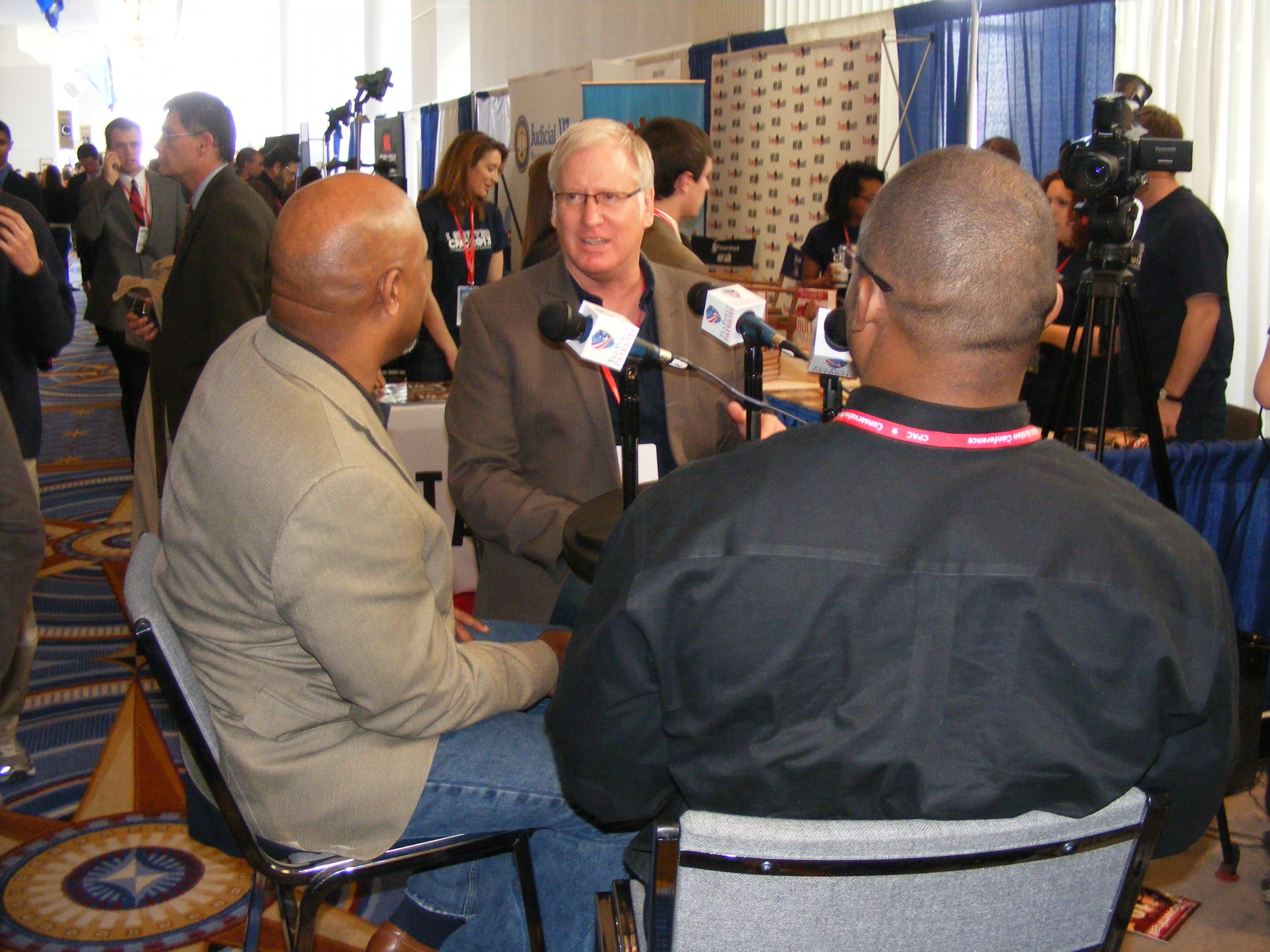 There were a few television broadcasts in various stages of production, such as those of Hot Air. 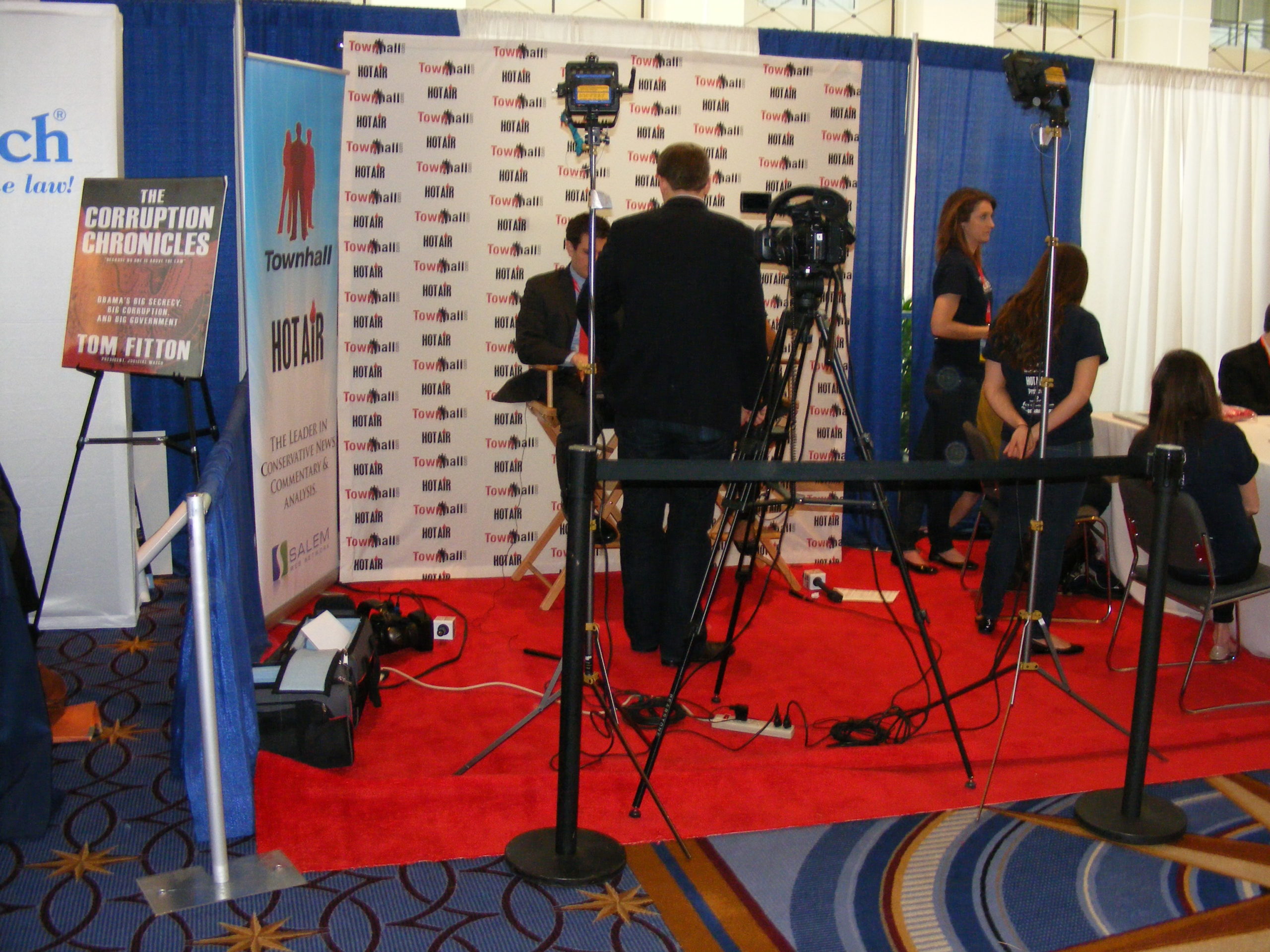 Also working on content was the TEA Party News Network, who thankfully sponsored the internet access (more on that in part 2.) 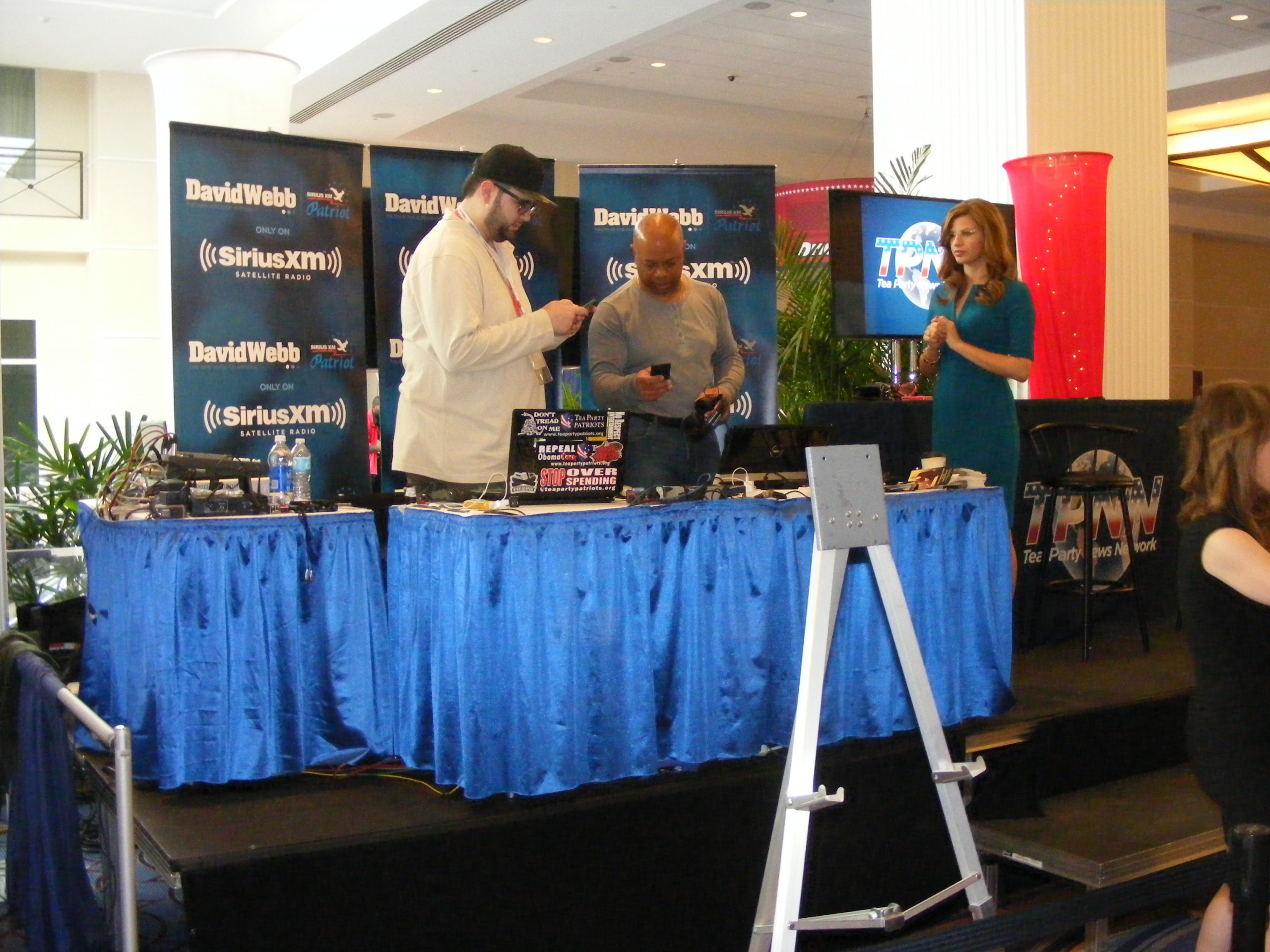 Further down Radio Row, another start-up operation was making itself known to the broadcasting world. 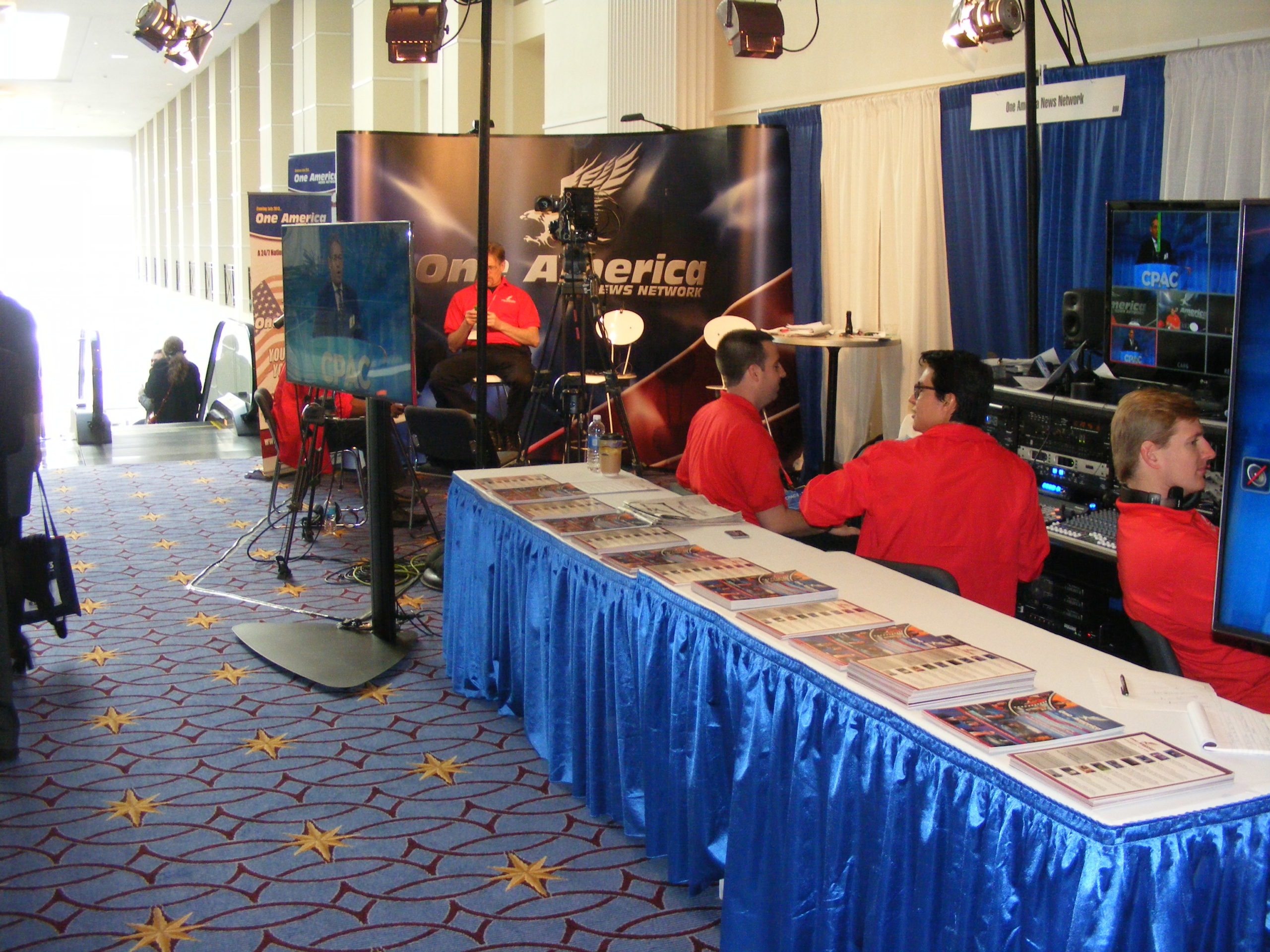 Later in the day, it was announced that One America News Network would make its debut July 4 of this year. “We will be the platform for the conservative message,” said OANN’s Graham Ledger. He cautioned, though, that cable systems “will resist putting on a conservative news network.”

Once I made my way down the hall and down a level, I was at the entrance of the exhibit hall. I didn’t count them, but there were probably over 100 groups exhibiting their wares. By the time I was through, the swag bag I received at the entrance was very full (I took the picture when I got home.) 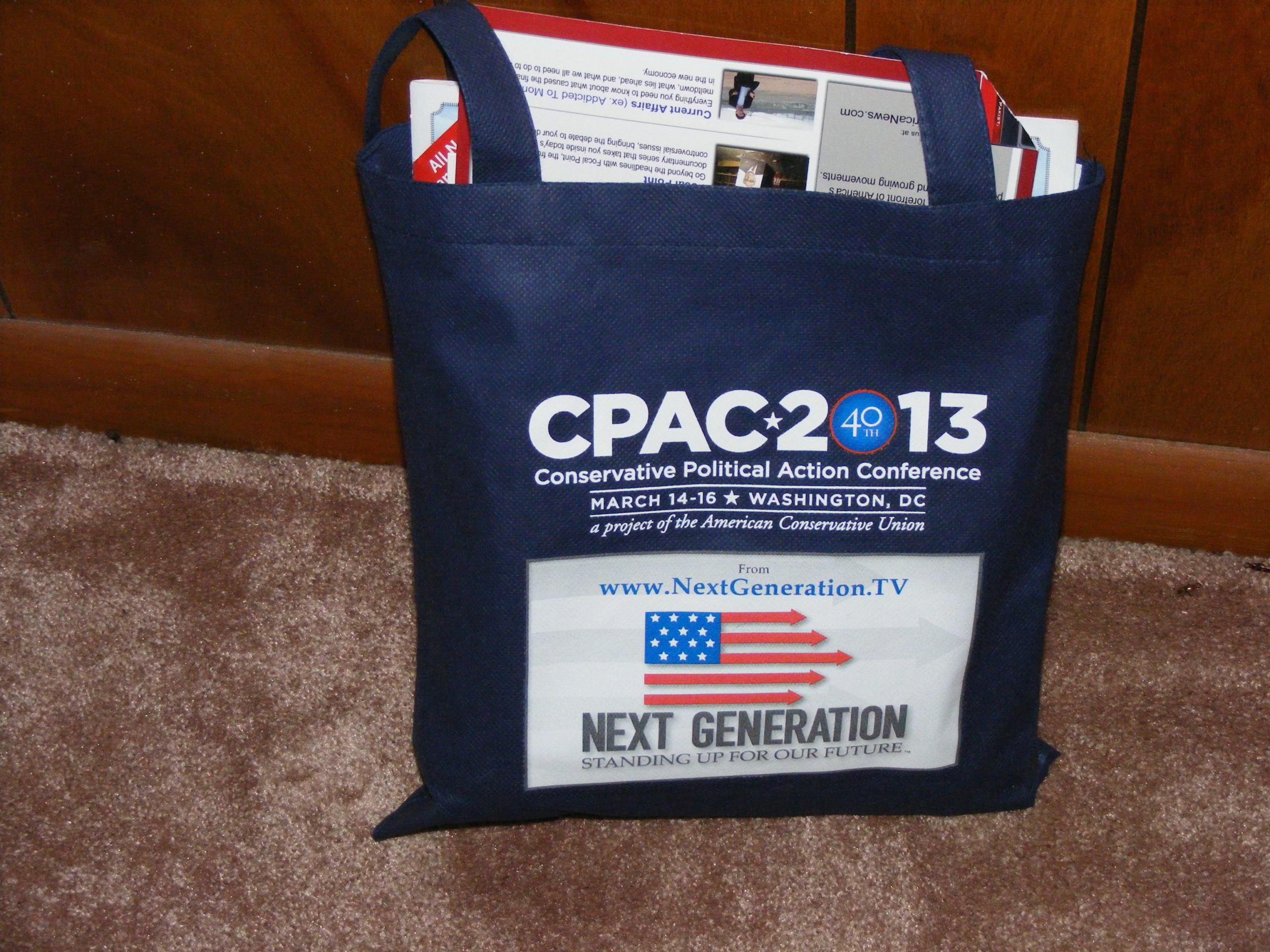 The exhibit hall was fairly expansive as well. 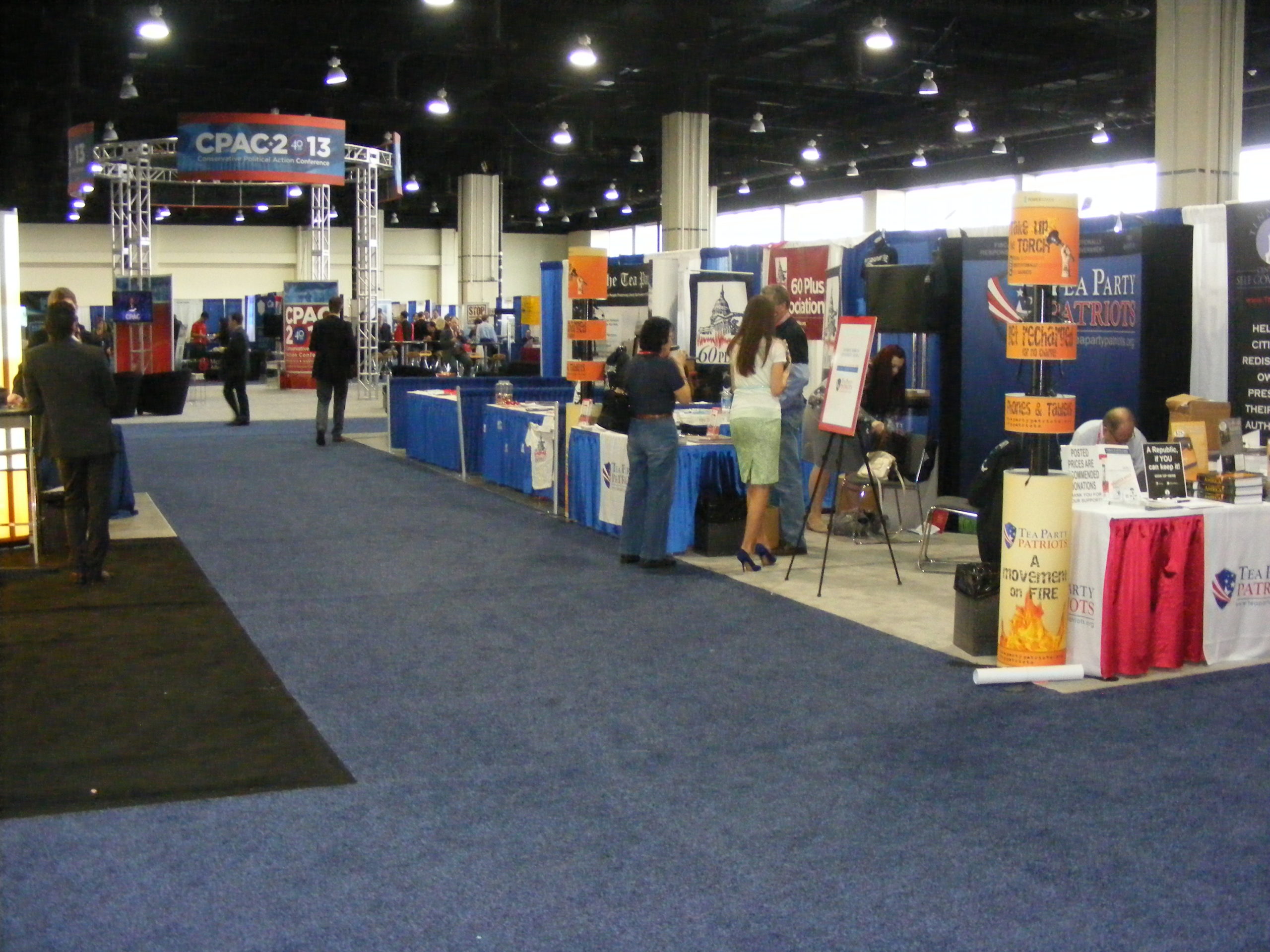 Here was a group I think needs further investigation. Unfortunately, there was no one there to explain the concept to me. From what I gather, it’s a database of conservative companies to support. 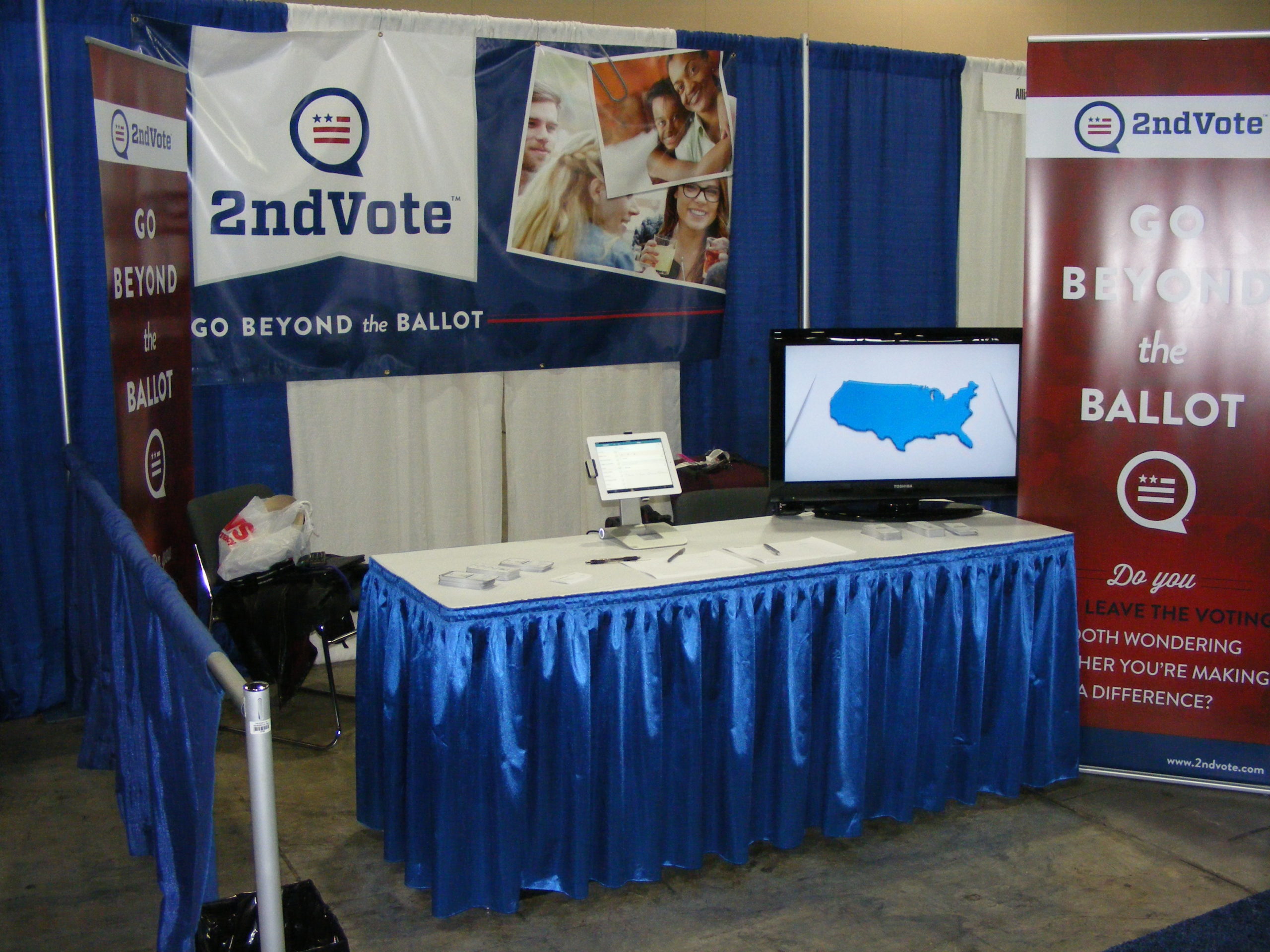 Another group I’d love to have seen a representative of was this one. Maybe their volunteer (or intern) had an encounter with some union thugs. 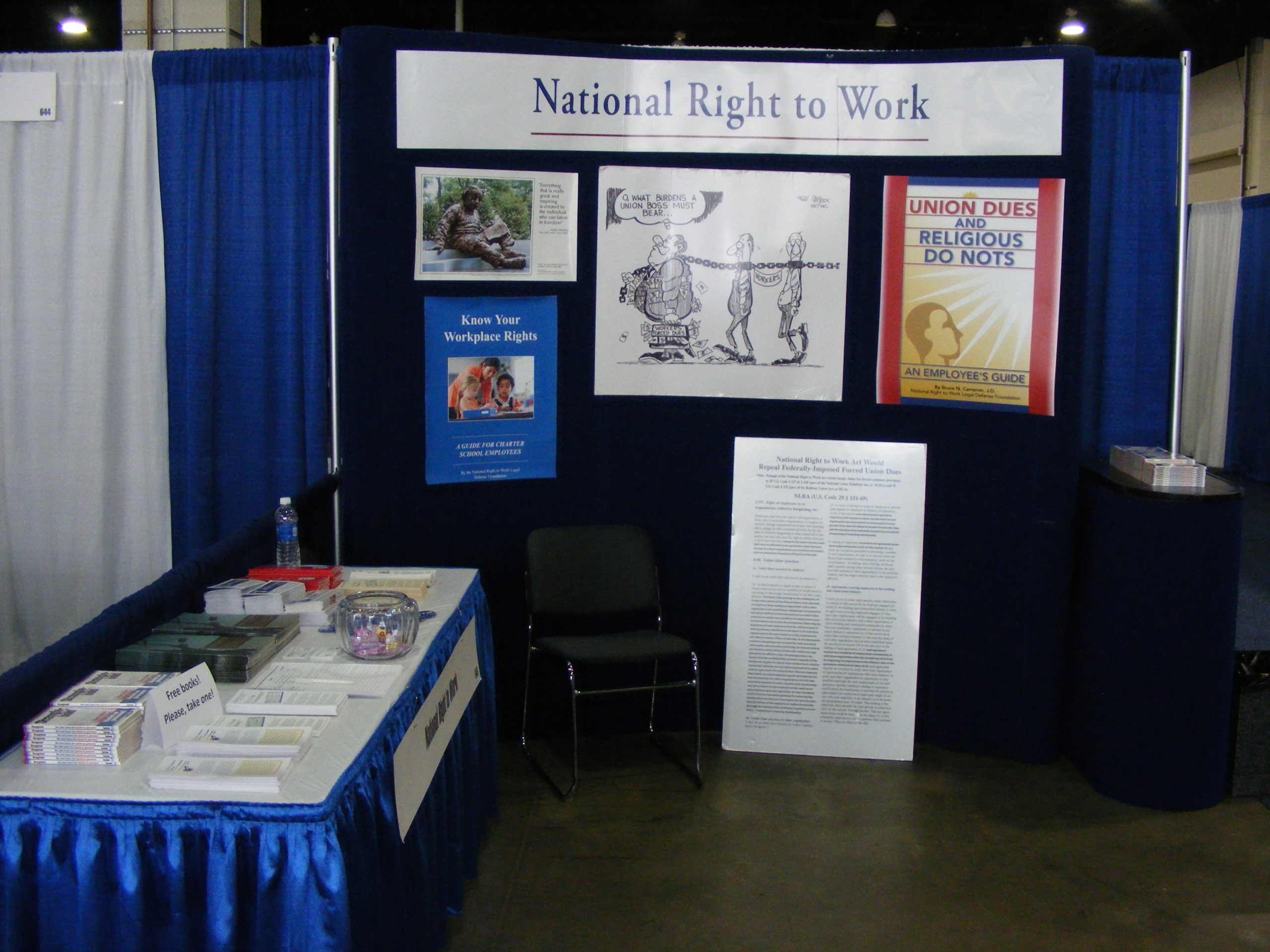 I got to talk with this group, though. They represent an outfit I’ve referenced a lot over the years. 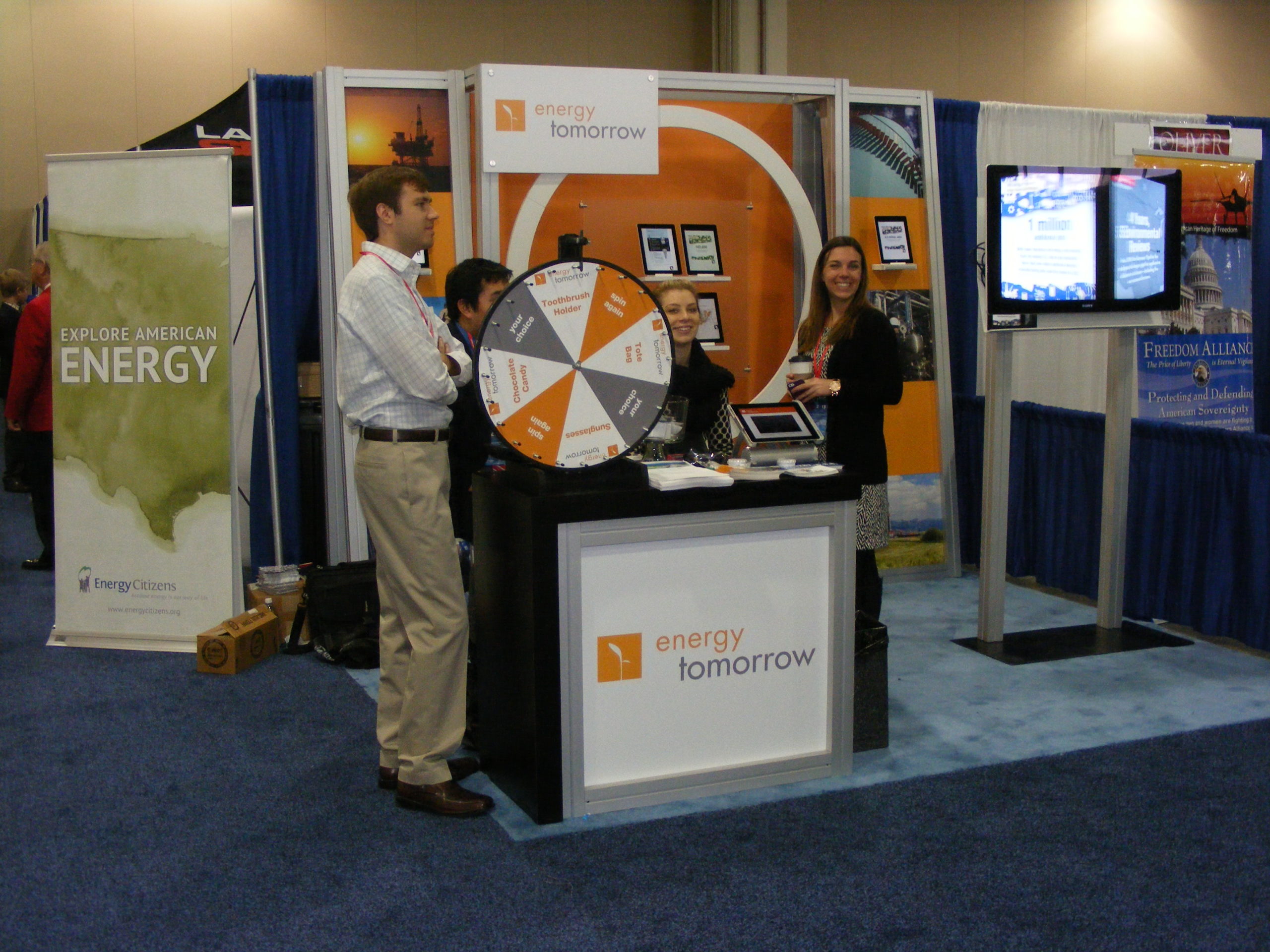 A newer but very nice organization has been referenced on this site since its formation. Unfortunately, in missing Friday I missed a chance to talk with its founder. 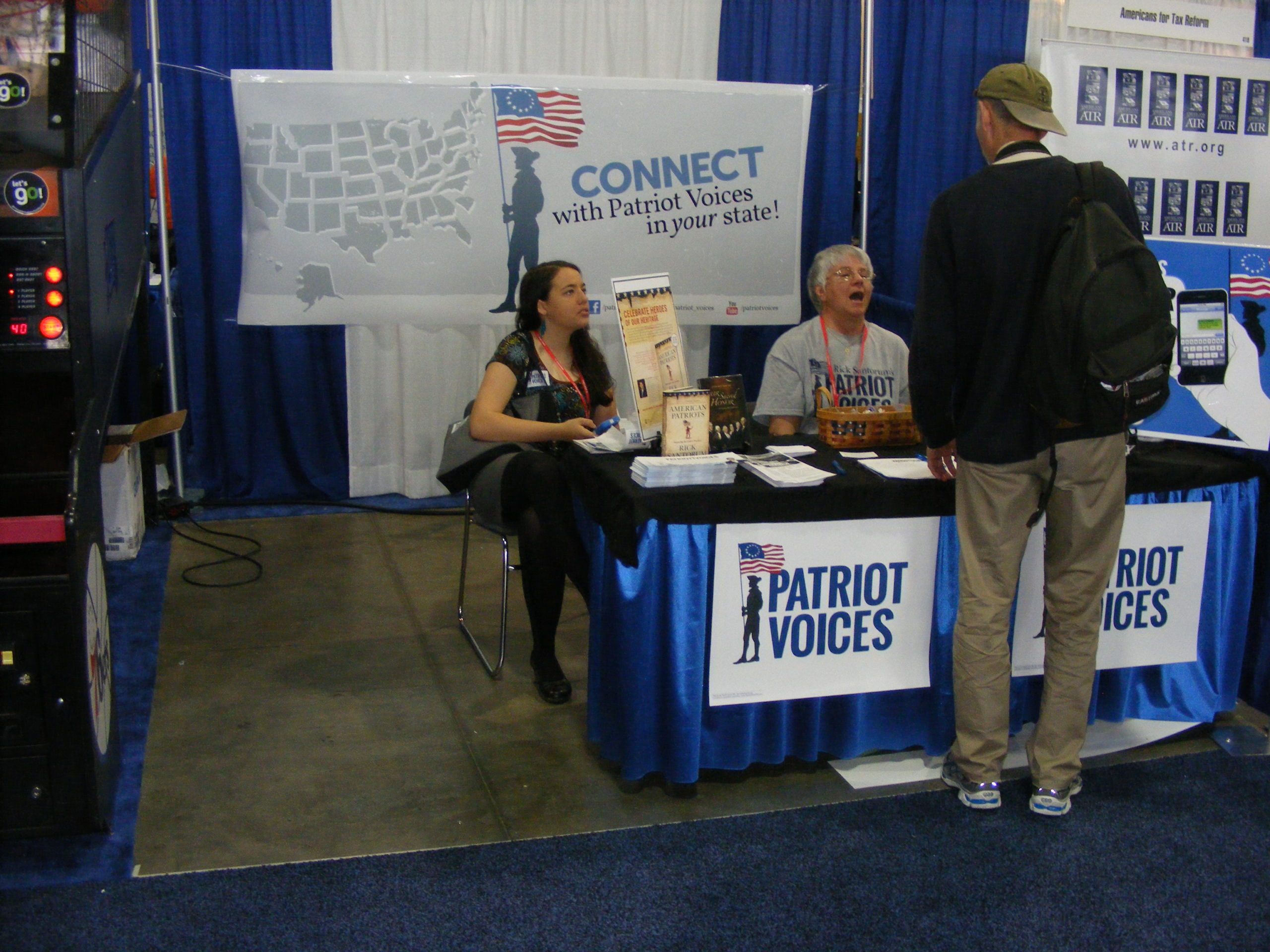 Someone else who might be on the 2016 ballot had some unofficial help. These were placed on a side table, but not many were wearing them that I saw. 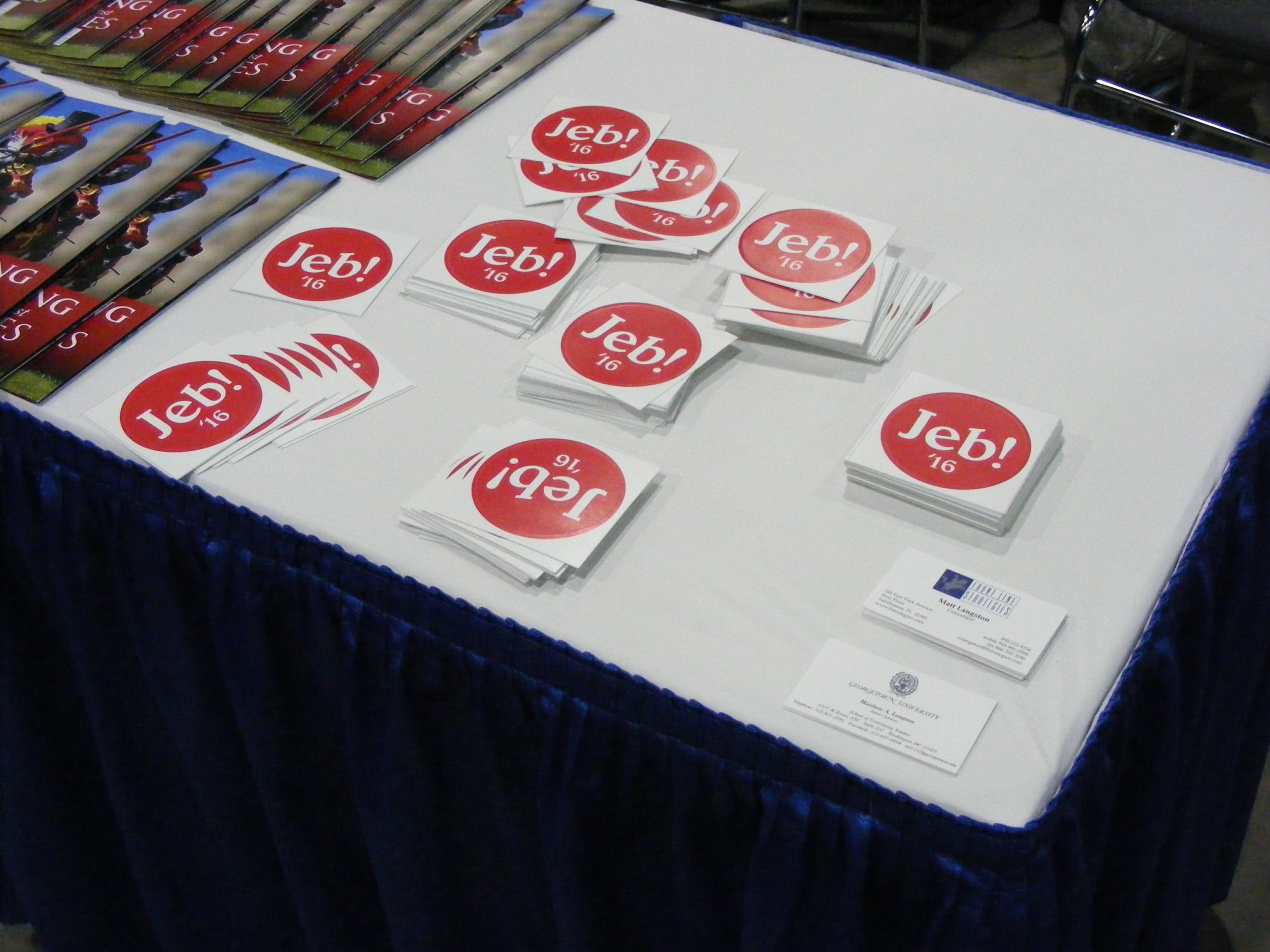 There was also an area in the exhibit hall for book signings. When I was down there, Newt and Callista Gingrich were signing their tomes with Ellis the Elephant looking on. 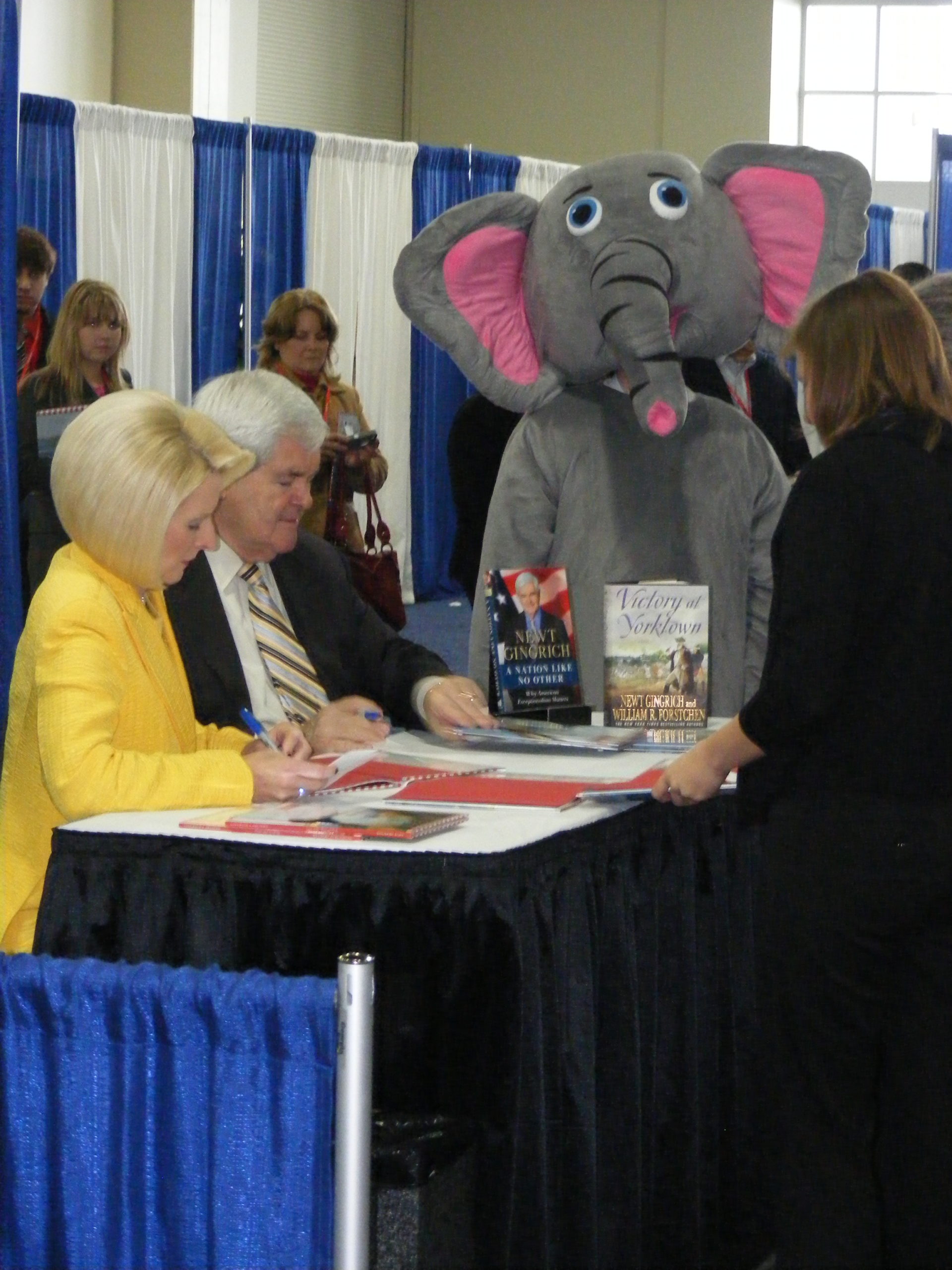 Some people simply took the opportunity to relax and take a quick break in the CPAC Lounge. They could watch the action upstairs on the monitors. 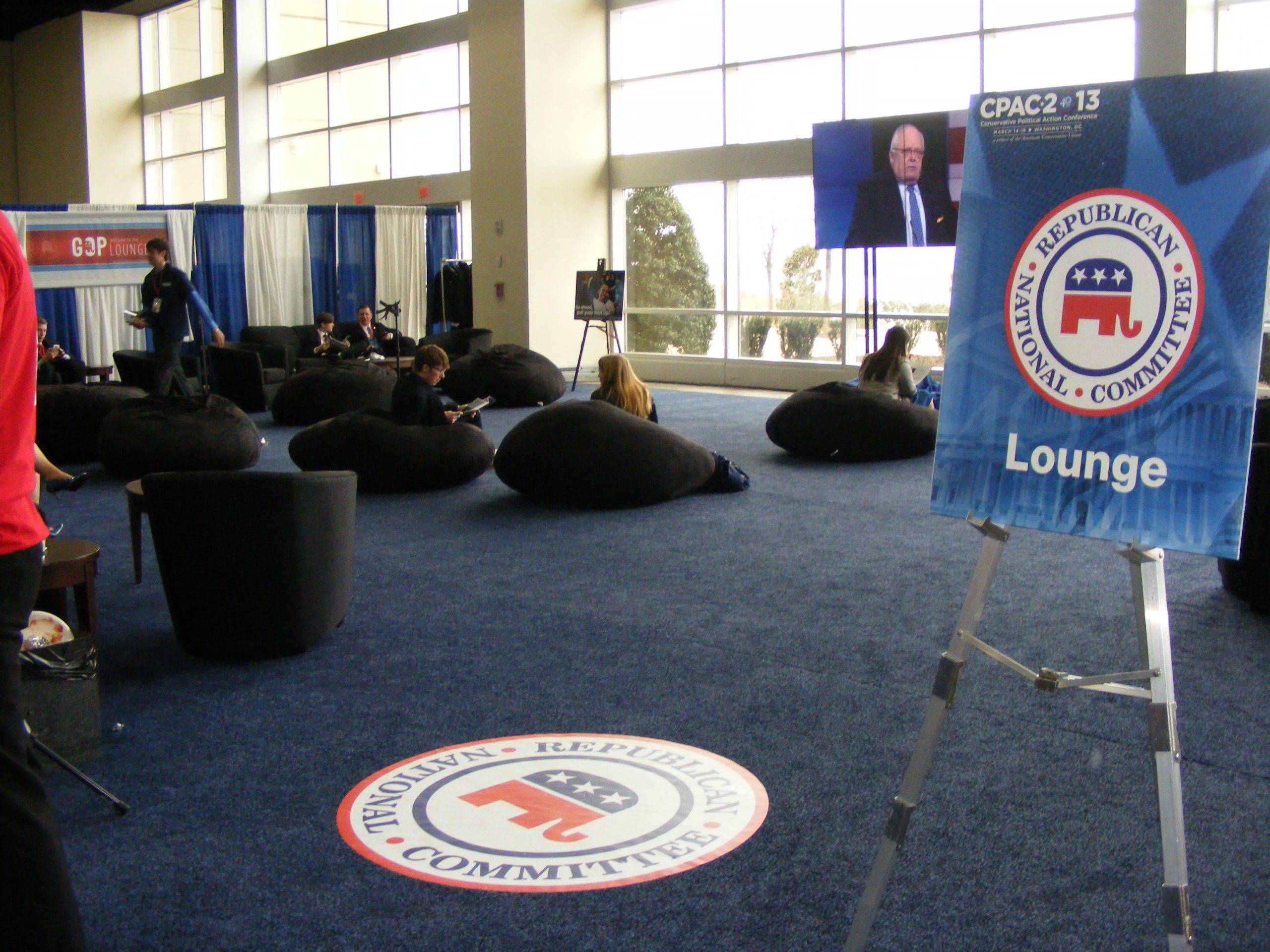 Just like them, I’m going to rhetorically relax and take a break, since this seems like a nice dividing point. Part 2 will be up tomorrow morning.