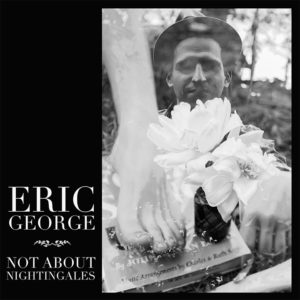 The thing that struck me about Eric George is that he’s an increasingly prolific songwriter. Now that may not be as hard to do when you’re an aspiring folk musician whose songs are relatively simple compositions and can be completed with just a little bit of instrumental help, but then the question becomes whether the quantity is translating to quality. In this case, the unevenness of George’s fourth album in three years (and second full-length this year) leads me to say no.

In listening to “Not About Nightingales” I had the impression that Eric writes and records when the mood strikes him, nor is he limiting himself strictly to a particular genre. While many of these ten songs would be at home categorized as acoustic folk, he takes Thought You Had A Home to electric mode yet veers into weeply old school country with Friends With Silence. Frankly, though, I wasn’t sure what to make of the last song Some Times and it’s not the impression I would have wanted to leave with a listener.

And it’s not just the musicianship: consider the nursery rhyme-like lyrical quality of Cure For The Soul or the hymnlike title track as departures from a vocal style and range that compares to Dylan and the Guthrie family.

In case this seems a little harsh, I took the time to go back and listen to his self-titled 2014 release. The genre is still the same, but those songs seem to be more muscular and thoughtful. Granted, this would have been through a much longer period of introspection and polish, but there’s also something to be said for experience, and some people can fall out of bed and write a good song.

That leads me to something interesting I read on Eric’s social media: “I decided to go with the wind on this project, and rather than record songs already written, I’m going to write and record a song each day, guided by the Storycards (a friend of his) found at a yard sale.” So it sounds like the next album is already in the works, and perhaps Eric is going for the hat trick this calendar year (as this release is about a month old.) But will the songs be very good?

Obviously some musicians enjoy writing music and even if those songs don’t bring them success they are enjoying life regardless. I looked at Eric’s roster of upcoming shows and apparently there are people who want to hear him perform around his home state of Vermont because he’s booked quite a bit in the coming weeks. So perhaps I’m not getting the full story (as always, don’t just take my word for it: I encourage you to listen for yourself) but this one simply didn’t come across as well as others I’ve reviewed recently.