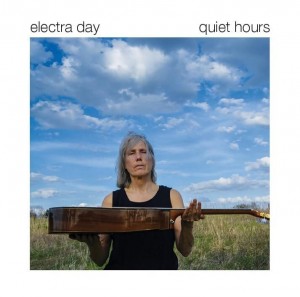 I don’t think this was literally recorded in the Iowa field depicted on the cover, but otherwise I must say that of all the albums I have reviewed over the 2 1/2 years of monoblogue music, this may be the title and cover that best (and most simply) describes the work within.

Julie Hampton, who records this solo album under her grandmother’s name Electra Day, wrote these nine songs over an 11-year period and performs them without accompaniment. Literally the album is just her and her acoustic guitar, which limits the music’s variety but allows you to listen to her lyrical tales drawn out over songs that usually run between five and seven minutes. (Ferry Song is the longest at 10:25, yet portions of it are among the most uptempo on the collection.)

In fact, this small description of the album isn’t hype or salesmanship, but pretty much writes the review for me:

Steady rolling guitar layered with deep and densely imagetic lyrics, drawing from the mystique of the places they were inspired by, work together to create an experience of engaged relaxation.

As I listened to her, I began to think of the songs as a musical journal, with a lot of references to the sky and other worldly expanses. (In fact, the one track I can share is called Big Sky.) I don’t picture Julie as the indoor type, although by her brief description of some past health problems she may have had a time in her life where she was trapped inside. “Quiet Hours” is a story of a poet and teacher that took up the guitar relatively late in life and has traveled – somewhat restlessly – around the world. Currently she lives in Iowa, but it seems to me the wind could pick her up and blow her anywhere. I guess as long as she has her guitar and a pen to write lyrics, she’s happier that way.

“Quiet Hours,” released in August, is actually intended to be the first part of a two-part “Quiet Hours” project with the other half “hopefully (to) be recorded next year.” If soothing melodies that tell a story are your cup of tea, you may well enjoy the quiet hour plus three minutes her collection runs. It’s just as simple as that.