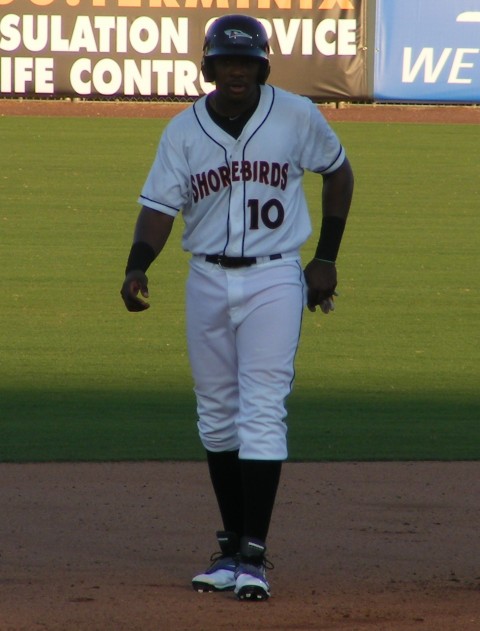 With the recent promotion of Yermin Mercedes, it’s fortunate that the Shorebirds have a batter who is on a tear at the plate. While he doesn’t present as much of a power threat, there’s no denying Randolph Gassaway is on a roll with an 11-game hitting streak in which he’s batting .439 (18-for-41), bringing his average up over 60 points in the process. As of yesterday his slash line was .337/1/3/.817 OPS in 25 games since being promoted from Aberdeen (where he began the 2016 campaign going 8-for-18 in 5 games.)

If the name seems vaguely familiar to Shorebirds fans, it’s worth pointing out that Gassaway was on the Shorebirds’ disabled list for several weeks in the 2014 season, never appearing in a game here. He was sent on a rehab assignment to the GCL Orioles before being redirected to Aberdeen for the rest of the season. In 2015 he spent the season with the IronBirds, hitting .273/0/22 in 60 games and splitting his time between corner outfield positions.

Originally drafted in the 16th round by the Orioles in 2013 out of Riverwood High School in Sandy Spring, Georgia, Gassaway started out as a first baseman but has found a home in the outfield since his second year in the pros. He replaced the promoted D.J. Stewart in left field for the Shorebirds (even wearing the same jersey number) and has played a clean 23 games so far. With another 30 games or so left in the season, it’s possible that Randolph can get around 200 plate appearances for his Shorebird campaign as a good audition to begin next season with his first full-season team, perhaps in Frederick. Having just turned 21 earlier this season, he’s gained enough experience to get his chance. The question is whether he can take advantage of his size (Gassaway is listed at 6′-4″, 210 pounds) to get more of a power stroke – he’s been more of a gap-to-gap doubles hitter in his career, projecting out to about 30 in a full season so far in his career.

It’s been a slow climb with a couple detours for Gassaway, but he has the potential to move up quickly for 2017 if his hot streak becomes a consistent .300 average the rest of the way.