The cancelled Trump rally in Chicago last week has caused many people to worry about what lies ahead in the months leading up to the Presidential election. As one friend put it, “It has that 1968 feeling.”

For their part, Cleveland police are preparing for a contentious GOP convention:

Both parties’ conventions are eligible for $50 million in federal spending for event safety. The news website Cleveland.com reported that the city’s police will call on suburban forces to boost staffing to about 5,000.

City officials on March 9 opened bidding for the purchase of 2,000 sets of riot-control gear, including batons, upper-body and arm protectors, shin guards and reinforced gloves. 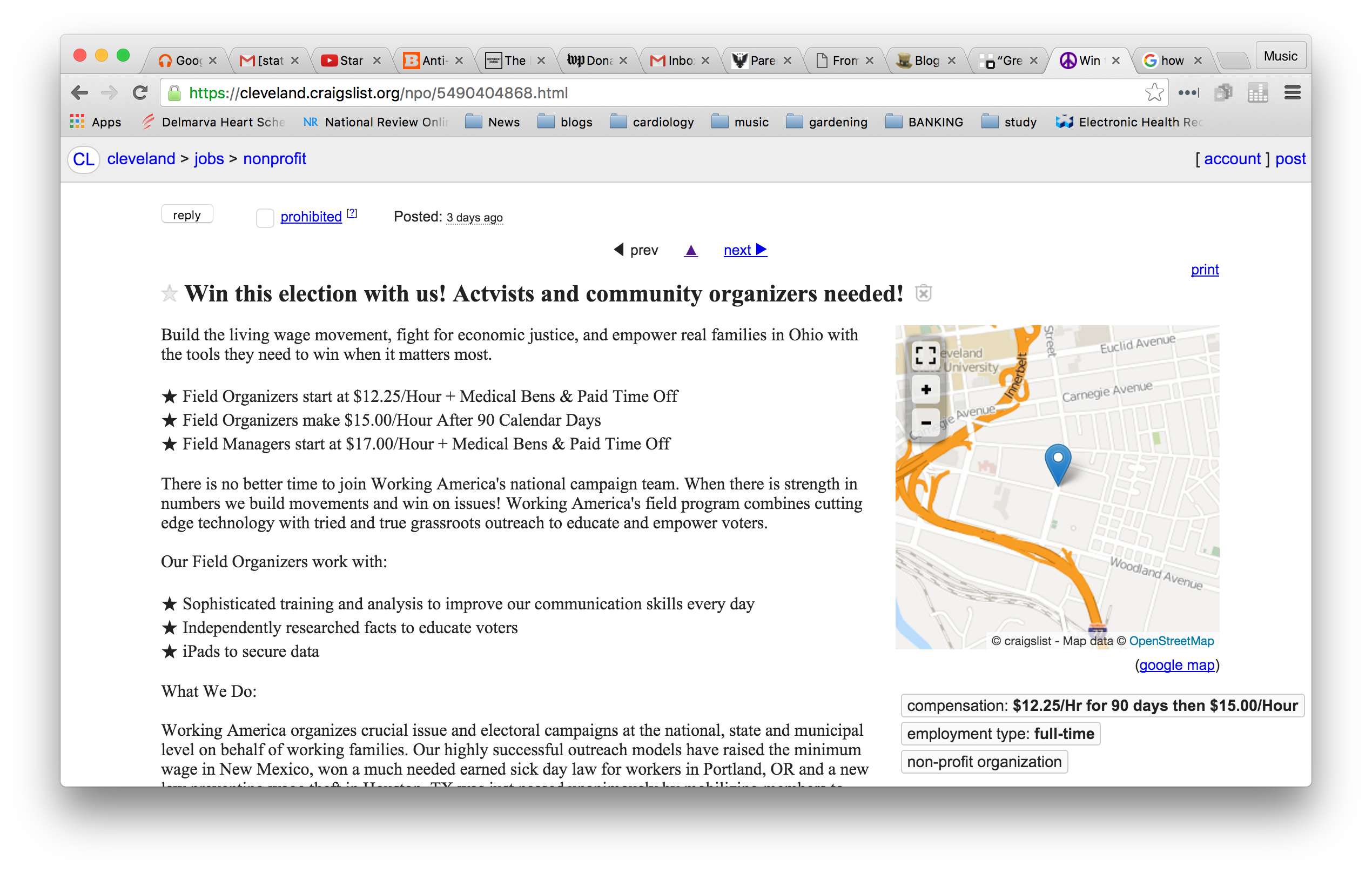 That sounds like somebody in Cleveland is getting ready for political action.

Next we have Breitbart’s Aaron Klein reporting on “Democracy Spring”:

With little fanfare and almost no news media attention, some of the same radical groups involved in shutting down Donald Trump’s Chicago rally last week are plotting a mass civil disobedience movement to begin next month.

Klein adds that “the group is backed by numerous organizations, including the George Soros-funded groups MoveOn.org, the Institute for Policy Studies, and Demos.” The Democratic Socialists of America and the AFL-CIO also support the group.

In addition, CAIR and other Muslim Brotherhood affiliated groups are jumping on the bandwagon by pledging to join Black Lives Matter, Hispanics, and other people of color. Watch this video clip to see Khalilah Sabra, the Executive Director and Project Developer for Muslim American Society Immigrant Justice Center, ask the audience why can’t we have that revolution in America?

The protests that started with the Occupy movement morphed into the Black Lives Matter protests in Ferguson, Missouri. Now we are seeing protests coalescing around the Trump rallies. While Donald Trump has been more vocal in his comments about immigration than other candidates, it is probably his position as front runner that is adding to the attention he is receiving. If Cruz is able to grab the lead from Trump, I believe that the protests would just shift to Cruz rallies. Indeed, no matter who wins the position of Republican candidate for President at the convention in Cleveland, he will be faced with ongoing protests as long as the groups feel that it is worth their while to stir up trouble.

Sheriff David Clarke of Milwaukee, Wisconsin, makes the case that:

Friday night in Chicago, at the site of the Donald Trump rally, we were awakened to what America will be like if we continue to kowtow to the radicalized left and their violent intimidation tactics to shut down Constitutionally protected speech. Theirs is not a protest movement. It is pure anarchy.

Please read his whole piece as it is right on target with what we need to do to stand our ground. The protestors in Chicago were jubilant when they succeeded in shutting down the Trump rally. It is not surprising that many of the protestors were students from the University of Illinois at Chicago on whose campus the rally was scheduled to be held.

Haven’t the students at universities across the nation been shutting down guest speakers that they disagreed with by screaming and interrupting them until they gave up trying to give their speech? Even better, they have protested and successfully forced their college administrators to cancel the speakers before they could even get on campus.

Our First Amendment rights to free speech have already been seriously curtailed on colleges across the country. The students at elite universities have to have safe spaces where they are protected from hearing anything that might upset them.

Political correctness is causing people to self-censor for fear of retribution or social alienation (shunning). If that is not sufficient, then there are also classes offered by employers to re-educate the employees into the correct attitudes. If an employee is sufficiently contrary, they can be forced into anger management remediation to help them overcome their anti-social behavior.

The most violently enforced censorship is that of sharia where a joke about Mohammed can result in your execution. While we are not at that point in the USA, there are plenty of groups pushing for speech codes about all things Muslim.

Our right to freedom of speech is only there if we continue to exercise it. Sheriff Clarke adds:

Law-abiding Americans must not and cannot back down to these freedom-squashing goons. It is time for all of us to understand just what our enemies want to achieve – chaos and fear — and to rally around the fundamental truths of the Constitution.

Get ready for a long, hot campaign season. Brace yourself for what is coming. The anarchists, CAIR, unions, Black Lives Matter, and assorted other groups will not back down unless forced to do so. If we equivocate and wobble, then the next step to losing our freedom of speech will be taken.

Battles over rights and other issues, according to Alinsky, should never be seen as more than occasions to advance the real agenda, which is the accumulation of power and resources in radical hands. Power is the all-consuming goal of Alinsky’s politics. This focus on power was illustrated by an anecdote recounted in a New Republic article that appeared during Obama’s presidential campaign: “When Alinsky would ask new students why they wanted to organize, they would invariably respond with selfless bromides about wanting to help others. Alinsky would then scream back at them that there was a one-word answer: ‘You want to organize for power!'” In Rules for Radicals, Alinsky wrote: “From the moment an organizer enters a community, he lives, dreams, eats, breathes, sleeps only one thing, and that is to build the mass power base of what he calls the army.” The issue is never the issue. The issue is always building the army. The issue is always the revolution.

We had better get this concept in our minds, because our opponents most certainly have.