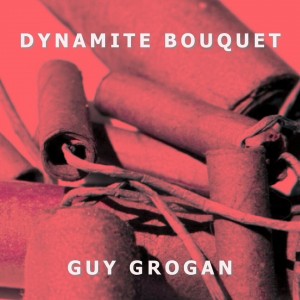 Prolific singer-songwriter Guy Grogan just put out his ninth release in five years last month, so you would think this one-man-band would find his distinctive sound. To an extent you would be right in thinking this way, but this effort is somewhat uneven.

First of all, listening to Grogan sing can be an acquired taste. Take a song like Now I’m Me From You, where he adopts a different key from much of the rest of his work. It made me wonder why he went in that direction; on the other hand I could appreciate the jazzy Moonbird. Grogan succeeds there in creating a distinctive sound.

Perhaps the other big miss is the ballad A Ghost Too Soon, which is an earnest effort but doesn’t come off as well as the song which closes the collection, the emotional What If I Told You. Grogan also provides a distinctive voice to slower songs like Waterfalls and the more midtempo River Like A Cry.

What puts this album on the good side of the ledger, though, is bread-and-butter rockers like the rollicking opening track My Own Way Out or the next song, Metafixation, which featuring a snarling guitar/bass combination which gives the song body. Pop-rock is well-represented by songs in the middle of the album like Nowhere Is Paradise and Pseudo Euphoria.

Given his body of work and my unfamiliarity with where he came from I took a little time to check out Grogan’s earlier albums. He has definitely evolved his songwriting in a more straight-ahead direction, eschewing a lot of studio tricks to put together a sound that’s more honest and true to his ability to play all the instruments on the album. (Grogan elected to get assistance with mixing and mastering the compilation, though.)

Guy is coming into his own as a songwriter, though, winning commendations in the UK Songwriting Contest for two of the songs on this CD: My Own Way Out and Metafixation. I would agree that these are two of the better songs on “Dynamite Bouquet” but you may feel differently – as always, when I get the opportunity I encourage the readers to listen for themselves.

There are many, many musicians who toil in the shadows, making music on their own in the hope to get mass appeal. This won’t be the album that puts Grogan over the top but based on the earlier work I heard he is getting closer to the mark.