You know, it’s interesting. While Republican gubernatorial candidates come down, talk to the people, and press the flesh at open (or at least nominally priced) events, those on the other side are going to be far from the limelight and even farther from a bus stop. 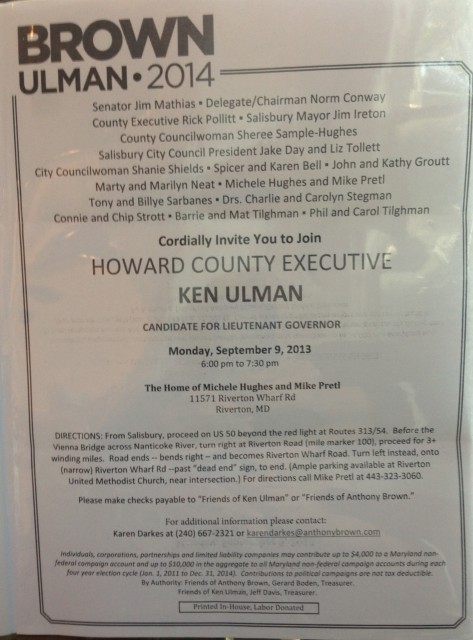 No, Ken Ulman isn’t exactly stopping in a transit-oriented development, and you better check for a nitrogen-reducing septic system since that area is pretty far outside the urban core. But the list of sponsors is the A-list of local Democratic officials from Salisbury and surrounding areas – although interesting exceptions to the list are Delegate Rudy Cane and Salisbury City Council members Tim Spies, Terry Cohen, and Laura Mitchell. Are they supporting Doug Gansler, Heather Mizeur, or waiting for a better offer? I know Mitchell gave to Martin O’Malley in his re-election effort, so perhaps she’s not as impressed with the mini-me?

The interesting piece of the puzzle is that I received this from a Republican friend of mine who got this invitation, with another intriguing sidebar being that one of the sponsors listed here was apparently the guest of a sitting member of County Council at our Wicomico County Republican Club Crab Feast. While we don’t mind taking money from Democrats, who wish to donate of their free will – unlike the usual case with their side and their oppressive taxation – you wonder what might be said at this Ulman soiree regarding the Republican candidates who showed up at our Saturday event.

Now this list of sponsors is nothing new at local Democratic events. Although not all are presently elected officials, most are regular supporters of local Democratic candidates for whom big government and/or the “good old boy club” mean enhanced business and personal fortune – for example, Marty Neat is a local bank CEO.

Obviously the take here will be but a drop in the bucket for the overall campaign. But Brown’s is a campaign which eschewed the Eastern Shore on its announcement tour back in June, unlike his Republican counterparts, so it’s apparent that all the Eastern Shore is good for to them is money. These sponsors are donating it willingly so that the rest of us will be compelled to part with ours in a not-so-voluntary manner.

One thought on “Showing how useful we on the Shore are”