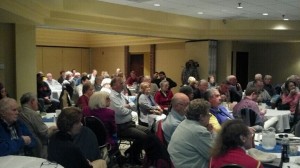 It was a pretty packed house last night for the Wicomico Maryland Society of Patriots meeting, in part because it was a joint meeting with Worcester County’s TEA Party chapter and partly because we had a strident Constitutional defender speaking. That gentleman is familiar to liberty lovers across Maryland as a leader who conceded that the Democrats and unions will be gunning for his seat next year. “They hate me,” said Carroll County Commissioner Richard Rothschild.

But before Richard spoke, we had to get some of the preliminaries out of the way: a prayer, which was originally uttered by Thomas Jefferson in 1801, the Pledge of Allegiance, the assessment by host Dr. Greg Belcher that “I’m pretty confident we’ll have some good information” coming out of this meeting, and some words from Sam Hale of the Maryland Society of Patriots, who characterized our situation as “not only fighting for our freedom, but fighting for our lives.”

Matt Holloway alerted us to an upcoming hearing regarding how we’ll address the provisions of SB236 on February 20 at the Civic Center. It was also announced that Delegate Mike McDermott had filed a bill in the House of Delegates to repeal last year’s Senate Bill 236, which provided much of the impetus for tonight’s gathering. But as a pair of videos shown tonight revealed, the process has been in the words for nearly three decades.

Indeed, there was a lot to digest in the 2 1/2 hours we held court at The Legacy Restaurant, and I haven’t even gotten to what our featured speaker said yet. Granted, some of it – particularly on the Constitutional aspects of holding office – was rehashed from that which he said at the Turning the Tides conference on Saturday, but the Agenda 21 and SB236 information was less familiar. Some of it had appeared in 2011 at a conference he’d spoken at (before SB236 even passed) but a number of predictions Rothschild made within that presentation have panned out.

A pair of guests were pointed out by Richard, and they weren’t those you may expect at a TEA Party meeting. But the two came representing the Chesapeake Bay Foundation, venturing into enemy territory as it were. But Richard didn’t see it that way, encouraging the group to join the Clean Chesapeake Coalition of seven Maryland counties. And while he contended that conservatives were capable of abating more pollution than our liberal opponents, he assured the CBF representatives that “I am committed to cleaning up the Chesapeake Bay.”

Yet Richard also contended that “if it’s sound policy it won’t need to be forced by the state.” SB236 and PlanMaryland both fail that test. Moreover, Rothschild was distressed by the vague and undefined terms in PlanMaryland, giving several examples. To him, “‘sustainability’ is a euphemism for ‘government approved.'”

“I said to the state of Maryland, ‘let the free market do its work,'” repeated Richard.

Rothschild went on to explain that in the old days, planning was a map. Now it’s a goal, a movement, and a new way of life required by government. The “smart growth” concept was a noble idea, he continued, but it ignores empirical realities. “The facts do not support their assertions,” he said. One example of that was failing to take into account that clustering housing units as proponents of smart growth suggest won’t raise enough tax revenue per unit to be viable without a massive increase in the tax rate.

And if the numbers don’t support the correct assertions, then create new ones. Rothschild criticized the new Genuine Progress Indicator standard, in which some portions increase through negative outcomes – for example, if all of the job producers who make high incomes are driven out of the state, the “income inequality” indicator would reflect this in a positive direction. Never mind the higher unemployment and economic misery sure to follow. “This is Machiavellian,” said Richard.

Another facet of this push toward cleaning up the Bay by fiat was the uneven distribution of costs. Using what he termed “rough order of magnitude” costs as an example, in order to cover the increased costs of Watershed Implementation Plan compliance Carroll County would have to raise taxes 10 percent and Frederick County 20 percent. But those property owners here in Wicomico County would be saddled with a DOUBLING of the tax to cover a $1.2 billion overall cost – bear in mind our annual budget is not far north of $100 million.

Yet, as he described later, the state was less than aggressive in addressing the problems at the Conowingo Dam, where over 100 feet in depth of nitrogen-rich sediment has filled in the waterway behind the dam. In severe storms, that sediment escapes into the Bay, wreaking havoc on the uppermost portions of the estuary.

Part of this presentation was handled by Phil Hager, the Carroll County Director of Land Use, Planning, and Development. Rothschild noted that it took a long time to fill the position because “I couldn’t find a land use manager who respects the Constitution” until Phil came along.

Hagar focused on some of the nuts and bolts of the law, noting that SB236 was passed in lieu of a BAT (best available technology) law by the General Assembly. Instead, the Maryland Department of the Environment administratively enacted the BAT regulations a week after the session ended last year.

Phil also made it clear that Carroll County was not hurrying through SB236 compliance, instead choosing to address this as part of their comprehensive plan, with ample public input. He added that Cecil County passed its map “acting under duress and protest.” Wicomico County is charting a similar path to Carroll County’s, holding off on submitting a map until more public input is granted.

Returning to the podium, Richard stated the case again that we can’t be so bold and arrogant to presume we know what’s best for our children and grandchildren. Too many innovations can take place to assume what is now will always be – for example few know there once was massive concern over reliance on horses, dubbed the Horse Manure Crisis of 1894. Instead of being buried under tons of horse droppings, though, technology intervened as the automobile was invented.

“I personally believe this law demands nullification,” Rothschild asserted, adding “if I tried to go the other way (and make zoning less restrictive) I’d be told ‘you’re violating the law.'” Yet no one bats an eye at this process, whether it be intrusions on property rights, the Second Amendment – which Richard called “a God-given right that’s not negotiable” – or any other intrusion. “We (as counties) don’t project power,” said Richard.

Finally, Richard predicted 2013 would be the year of greenhouse gas in the Maryland General Assembly. The goals are already in place: a 15% reduction from 2006 levels by the year 2020 and 95% reduction by mid-century. The 15% reduction is expected to cost $20 billion, a toll which Rothschild charged would create “devastation of our economy of epic, Biblical proportions.”

He closed out by telling the crowd what many of us already harbor as a gut feeling: “It will end in a trainwreck.”

On the other hand, I found the meeting as informative as predicted. The good news is that PAC14 taped the proceedings, so at least some of it will be available for future viewing on our cable access channel as well as online.