To be honest, the picture part of this will be pretty lean. But here’s one of all the signage lined up along Glen Avenue: 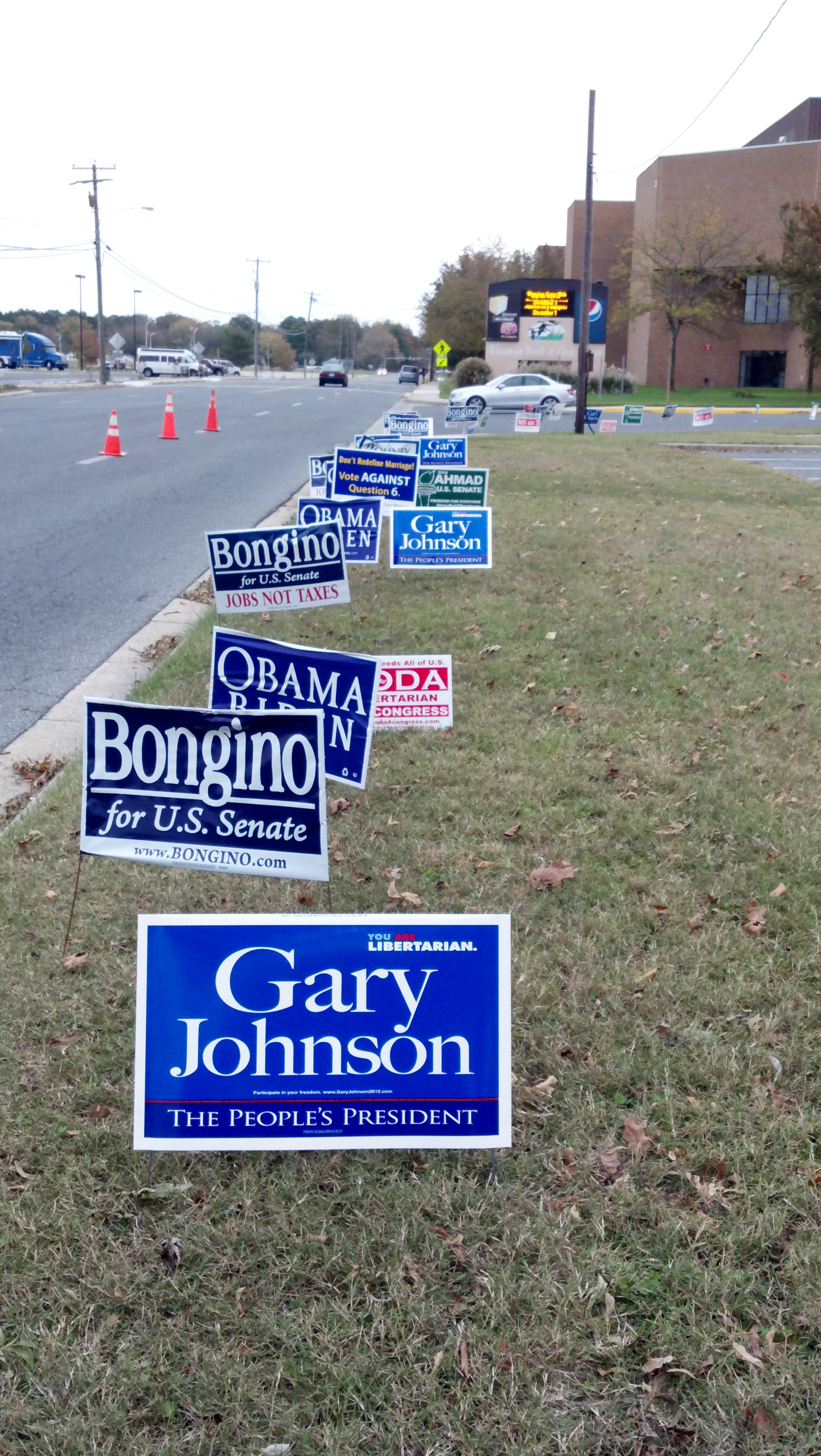 This Election Day was a little unusual because I had to work – in previous years I was able to use a vacation day but my outside job is extremely busy this time of year. So I didn’t get to my assigned polling place (which happens to also be my voting location) until about 2:30.

As I noted on Facebook, the Obama representative was already there. 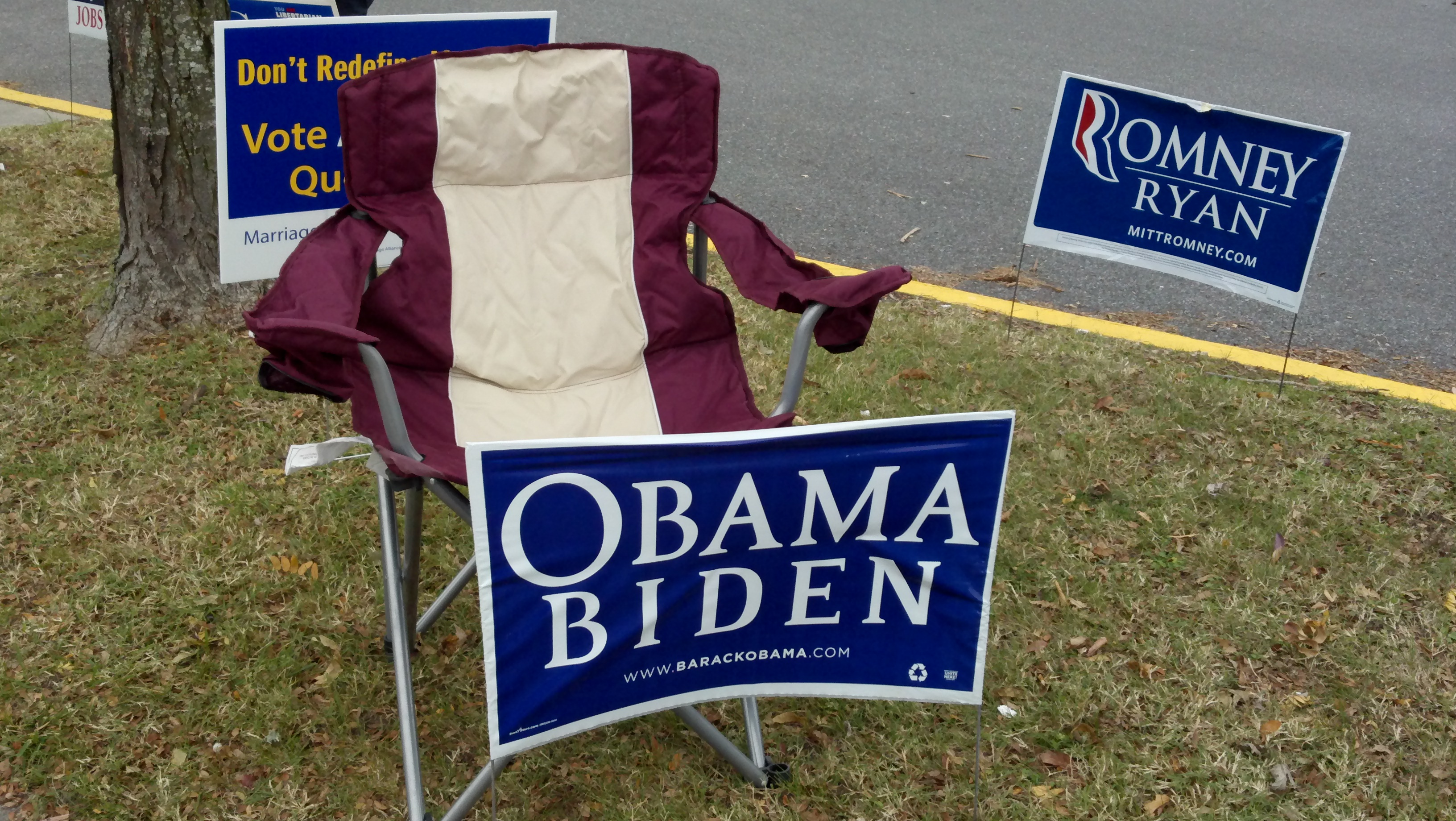 It is worth noting that in the time I was there I had only a few campaigners keep me company: one from the Bongino campaign who was there throughout, one volunteer representing the Maryland Marriage Alliance who was there about 3/4 of the time (and had also been there in the morning), a Democratic operative who was there for perhaps a couple hours, and at the tail end this guy: 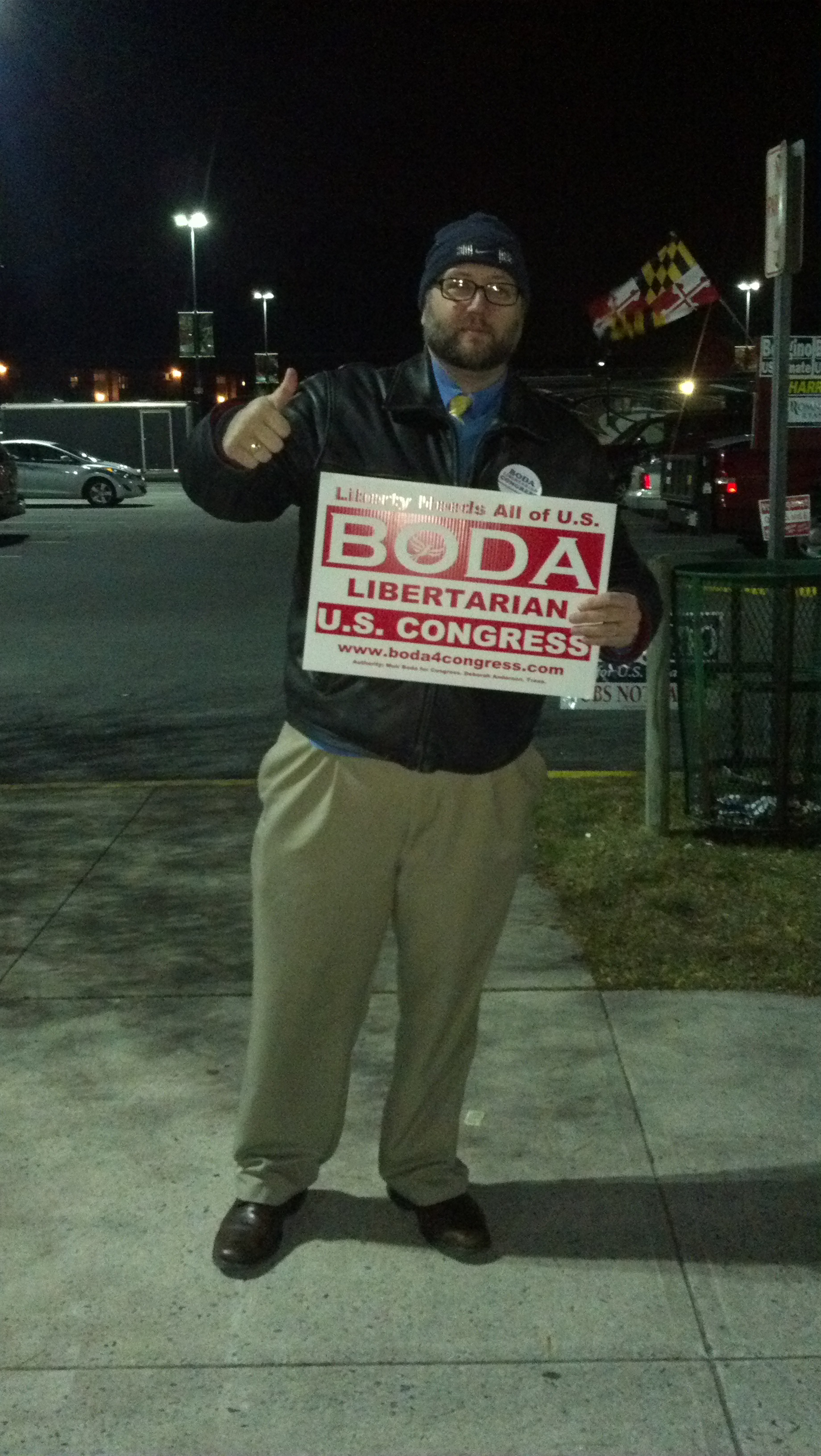 Truthfully, by the time Muir got there I’m not sure it did much good, nor did about half of the 130 or so palm cards I had regarding the ballot questions. But he did get almost 4% of the vote, in line with previous LP candidates here.

One thing I noticed about this polling place – perhaps as opposed to the Delmarva Evangelistic Church where I had worked a couple times before and perhaps due to early voting – was that business just died after 6 p.m. or so. Once the rush of people coming from work subsided, we had little to do but talk among ourselves.

According to the state Board of Elections, just about 32,000 people came to vote on Election Day in Wicomico County after around 6,400 took advantage of early voting. So only about 1 in 6 voters decided to vote early here, but I think part of that was the crowd who used to come after 6 previously.

One thing I have heard in the post-election discussion, though, is how bad the turnout was nationwide compared to 2008.  Barack Obama lost about 10 million votes overall while Mitt Romney failed to meet John McCain’s total by a couple million votes. Give or take, about 12 million people sat this one out and the question is why. But that’s one for another day and perhaps another analyst.

What I knew, though, was when I arrived at Republican headquarters to watch the votes be counted I could tell the mood wasn’t joyous. It simply didn’t have the sound of a victory celebration, and most likely it’s because so many of us were sure and assured that Mitt Romney would pick up about 52% of the vote. Instead, it seems like Rasmussen, the group out in Colorado whose economic math forecast a Romney victory, and even the Redskin Rule were all wrong.

Instead, the evening was a disaster for conservatives in Maryland and elsewhere:

So what do we do? Well, on that I have to ponder some more. I just know I left the GOP party once Pennsylvania and Wisconsin were called because those were the linchpins of Romney’s strategy. And it will forever be debated locally whether the Maryland GOP’s insistence on helping elsewhere may have hurt the cause of local officials, but given the large margins of defeat it likely would have made no difference.

I’ve said before that Election Day is my Super Bowl and right now I have an idea of how those who were on the wrong side of the blowouts common during the 1980s and 1990s felt in the days afterward. I have a low opinion of many in my adopted home state who eschew logic and rational thought for free stuff and feelgood policies which will be detrimental in the long run.

But there is always hope and another election coming around the corner. The work has already started for that one.

2 thoughts on “Election Day 2012 in pictures and text”