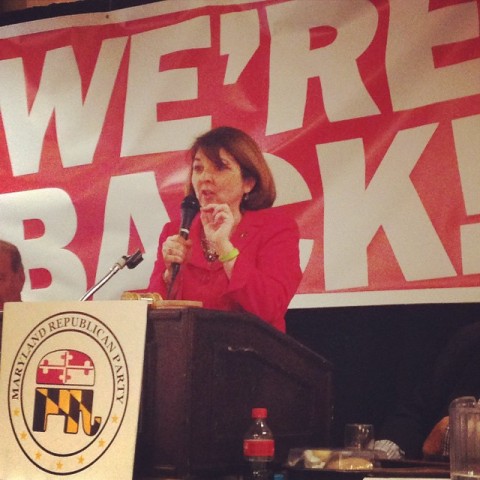 Tomorrow, unless some last-second nomination is made from the floor and somehow gathers enough support to prevail, Diana Waterman will be elected to a full two-year term as Maryland Republican Party Chair. It would be the first re-election of a Chair in my eight years of involvement, and proves that hard work and success is its own reward. Her tenure has been successful enough to scare off any opposition, so she joins party Treasurer Chris Rosenthal as Executive Board members who presumably have an unopposed re-election.

It’s worth noting that Third Vice-Chair Eric Grannon is the only incumbent taking a pass on another term, and his seat has the most competition with three contenders: Eugene Craig III, Tommy Rodriguez, and Rob Willoughby are all trying for that position.

Each of the three comes at the position with different perspectives. Craig and Rodriguez were most active in the 2014 campaign, as Craig ran for Baltimore County Clerk of the Court and Rodriguez was the campaign manager for the Ron George for Governor bid. Willoughby, on the other hand, comes from a more traditional route as he is the Chair of the Caroline County Republican Central Committee and as such has the longest list of endorsements.

All three are active in social media, with Rodriguez stating his priorities as:

We have an unprecedented opportunity as Maryland Republicans to restore prosperity, accountability and personal liberty to the Free State. As your Vice Chair, I will commit my time and talent towards recruiting the next generation of conservative leaders and building a statewide network of donors and grassroots volunteers who will help them towards victory. Together, we can build a Republican Party committed to growing the middle class, reining in big government and providing the best array of education opportunities in the nation.

Craig has the biggest endorsement in Dan Bongino, a blog post by Jason Boisvert explaining Eugene’s thoughts on priorities, and may have the largest brush with fame of the three candidates. Craig was the first one in the race but both he and Rodriguez may have a difficult time against Willoughby as he is familiar to many more potential voters.

Another intriguing race is the one for Secretary, where incumbent John Wafer has a challenge from Joe Fleckenstein.

While it’s not quite as simple as a description as I’ll give it, basically the job of a secretary is to take notes. (It’s why I do a similar function in two organizations because I also have that mindset as an outgrowth of this gig.) But it also has a vote on the Executive Committee because we changed the bylaws in 2013 to allow this. (I recall it was my former Chair Dave Parker who introduced this as an amendment to a bylaws proposal to also grant the YRs and College Republicans an Executive Committee vote.) Fleckenstein is a steering committee member in the Harford County Campaign for Liberty, reflecting a push by the pro-liberty forces in Maryland to have more of a say in the state party.

In the race for Second Vice-Chair, incumbent Larry Helminiak faces a challenge from Greg Holmes, who unsuccessfully ran for Congress from the Fourth Congressional District this year, losing in the primary. Of the three Vice-Chair races this seems to the the most low-key one.

On the other hand, I am being bombarded by e-mails in support of re-electing Collins Bailey to the First Vice-Chair position, So far here is a list of e-mailers from whom I’ve received Bailey endorsements:

The list of endorsements for Mary Burke-Russell isn’t as long, but it does include former gubernatorial candidate Charles Lollar. She also has the backhanded support of Red Maryland‘s Brian Griffiths, who wrote a scathing piece on Collins Bailey yesterday. Griffiths’ piece comes off as remaining sour grapes from the ill-fated Chair campaign of Greg Kline, but Burke-Russell already appears to be one of the “establishment” choices against the pro-liberty insurgency which you can put Bailey, Fleckenstein, and arguably Eugene Craig into. If all three win the MDGOP may be a more activist vehicle during the General Assembly sessions – perhaps they should be.

Without speaking to any of the candidates personally – and not having a vote in the matter since I chose not to take a proxy offered to me – I’m not going to make any official endorsements in the race. I’m on record as supporting Diana now although at the time I preferred Collins Bailey be the Chair. Larry Helminiak has also done a fine job.

I will say, though, that I believe those who have been in office by and large deserve re-election but the voters would still be served well by the challengers. And given certain winners the Maryland GOP would be far more diverse in all respects than its Democratic counterpart, which seems to try and balance based on external characteristics and not diversity of thought.