It was an exciting day and a contentious night for the new County Executive and County Council here in Wicomico County. It’s not often the incoming governor pays attention to an event in our fair county. 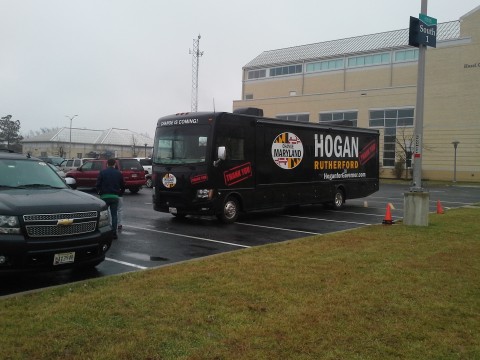 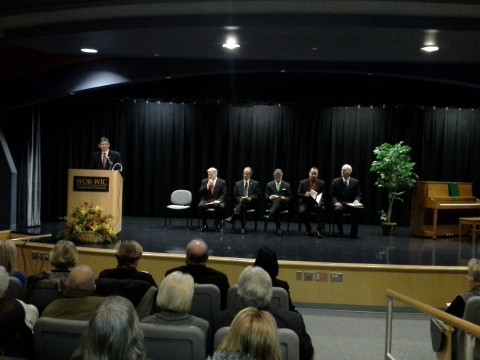 But the auditorium at Wor-Wic Community College was packed to its 200-plus person capacity to watch our second County Executive (and first such Republican) Bob Culver take the oath of office from Clerk of the Court Mark Bowen.

After the presentation of colors, the Rev. George Patterson delivered an invocation where he prayed that Culver would be “seasoned with wisdom, grace, and humility” as he took this office.

That quickly, since it had to be finished by noon, Culver took the oath flanked by members of his family. 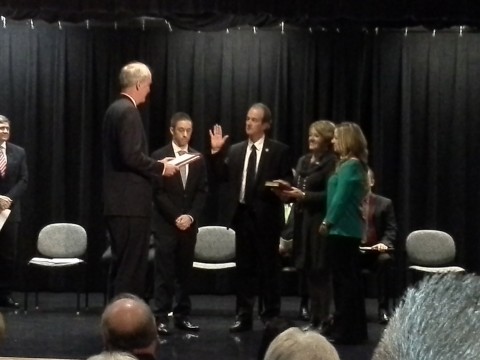 In his remarks which followed, Bob expressed how he was “humbled and honored” by his election, about which he commented that he “wasn’t the only one who wanted to see change.”

His approach was going to be relatively simple, as he believed “good, workable ideas can come from either side,” but at the same time “‘if it ain’t broke don’t fix it’ will no longer be the rule.” On the other hand, change wouldn’t be made for its own sake.

Culver’s brief address, which lasted less than four minutes, concluded with a simple request: “we need your ideas.” He then introduced the Governor-elect. 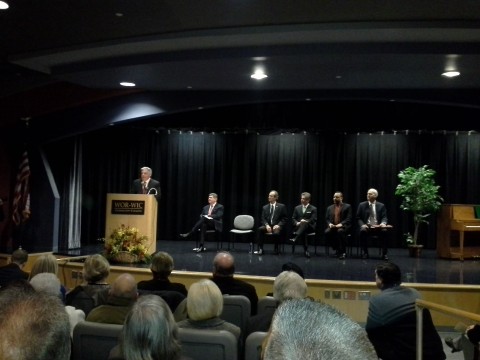 Along with Culver, Larry Hogan announced “we’re going to roll up our sleeves and get to work.” Hogan was optimistic about Wicomico County and the rest of the Eastern Shore, promising we “will no longer be taken for granted…you’ll have a seat at the table.”

His first order of business affecting us locally was fighting the Phosphorus Management Tool, new regulations he accused Governor O”Malley of “push(ing) at the midnight hour, on his way out the door.” Hogan wasn’t necessarily opposed to regulations on farmers, but believed they needed to be based on science and not “promised to a special interest group.”

Turning to the new County Executive, Hogan said “Bob is truly a salt of the earth kind of guy” and that he “can’t think of anyone more qualified” to grow the local economy based on his business experience than Culver.

The ceremony wasn’t all that long, but it was lunchtime and many of those who came to the swearing-in went to the next building to celebrate with a reception hosted by Culver. 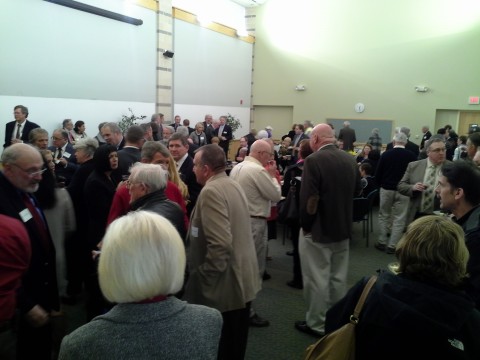 I must say the catering was outstanding, and people generally left in a good, optimistic mood.

But while Culver was “humbled and honored” by his election, the first County Council meeting under his tenure was definitely on the humbling side.

It began, though, with remarks from the outgoing County Council. In particular, retiring Council member Gail Bartkovich called her tenure “an honor, privilege…and tremendous education.” Interestingly enough, all three of the women who served in the 2010-14 term left County Council, leaving a body of seven men.

Stevie Prettyman acknowledged the large crowd “for a change” and thanked the citizens for their trust in her.

And while he wasn’t going anywhere, John Hall lamented the “loss of wisdom and integrity” provided by the outgoing members. Matt Holloway, who was also staying on, noted this edition of Council had accomplished a lot: building a new Bennett Middle School, supplying water to the Morris Mill neighborhood plagued by well contamination, and continually improving its bond ratings.

Similarly, Sheree Sample-Hughes, who was elected to the House of Delegates, thanked the people for “putting their trust in me as a leader.”

But she foreshadowed the discussion to come by expressing her disappointment that West Salisbury Elementary School would not be in the revised bonding program Culver was asking County Council to approve.

After a quick recess to rearrange seats, the new County Council was sworn in. 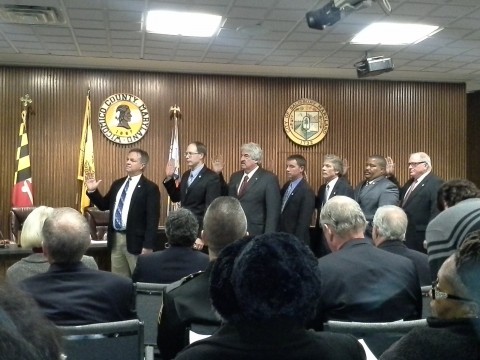 Their first order of business was electing a president and vice-president. Since John Cannon and Matt Holloway were the lone nominees for those respective positions, Cannon took over the meeting with Matt Holloway seated next to him.

The other item on the agenda was the controversial reduction in new county debt from the $16.5 million requested by Rick Pollitt to a new $10.9 million total Culver desired, To accomplish this reduction Bob reduced the bonding amount for ongoing construction of Bennett Middle School, and postponed three other projects: work on the final phase of the Westside Collector Road, work on the Wicomico Youth and Civic Center, and replacement of West Salisbury Elementary.

Projects which would remain, on the other hand, were Bennett Middle School, the purchase of land for dredge material placement for the Wicomico River, the purchase of the newly renovated State’s Attorney office, and renovations to Perdue Stadium.

Culver explained that the Bennett bond could be safely reduced without endangering progress. He also made the case that improvements to the river channel would allow for continued commerce and safer oil transport (as there is a refinery along the river), the purchase of the State’s Attorney office would save $300,000 annually in rent, and that the Perdue Stadium renovations were at the request of the Orioles and would ensure the team remains in Salisbury.

Joe Holloway commented that taking off the school was “probably a good idea” based on his conversation earlier that day with Larry Hogan, with Kilmer agreeing it was likely a “prudent course.” On the other hand, Larry Dodd was “disappointed” that the West Salisbury bond was removed, and Ernest Davis, who represents that district, criticized the deletion as pushing them to the back burner again.

That sentiment was echoed frequently in the public comments Cannon allowed. Over a dozen citizens stood up to blast the decision to drop the bond funding, many complaining about the deplorable shape the 50-year-old building is in and decrying its lack of air conditioning. (It’s worth pointing out the state denied Wicomico County’s request to address the air conditioning for FY2015 because the amount was too small – see page 173 here. Three other Wicomico County schools were granted funds.)

In the end, though, the vote was 5-1 to approve the revised bonding, with Davis opposed. Larry Dodd had to leave early for a family function.

After that vote, Kilmer expressed the sentiment that he wished he saw as much passion about what happens in the schools as he did about the school building. But in his president’s remarks, Cannon was more optimistic, saying “I see good things for Wicomico County.” He also expressed his appreciation for all that Rick Pollitt did in his eight years at the helm.

But it goes without saying that Culver’s honeymoon wasn’t very long. Several people expressed the belief that our place in line for funding would be lost and we could go another several years before the needs of West Salisbury were addressed. But Culver and County Council wanted to see some of the buildings for themselves to assess the needs. Aside from the question one observer brought up about the maintenance issues related by those testifying on West Salisbury’s behalf, it was a night filled with passion for a school of just 309 students.

Look for more battles as the FY2016 budget begins to take shape next year.