I promised when I did last month’s awards that this month I would do a first half in review, so here goes.

Over the last several years, our trend has been to have the better first half and fade in the second so the fact that we had a lackluster 29-39 first half that placed us 10 games in arrears to eventual leader Kannapolis doesn’t bode really well. And unlike a lot of other seasons I can recall, the team did not do a large-scale turnover at the All-Star break as no players were promoted to Frederick – those who were bound for Aberdeen had already long since left the scene. So there’s been little player movement since the second half began.

Statistically, the Shorebirds were a bottom-echelon team in most offensive categories, generally ranking outside the top 10 in the league. As far as pitching went, they were more toward the average but still tended toward the lower half. And the fact that there were no obvious standout players who just had to be promoted to Frederick says a lot about this team, which seems to be comprised of a large proportion of late-round draft picks for some reason. As of this writing, it’s worth noting that the top five hitters in average were respectively drafted in rounds 31, 19, 7, 21. and 15, while the best ERAs belong to pitchers drafted in rounds 33, 23, and 34 (three others were international free agents.)

So the fact that they are where they are in the standings may be reflective of their relative talent level compared to other squads loaded with blue-chip prospects. The success we may have will definitely be unexpected on paper, but it is why they play the games.

June provided a wide-open free-for-all competition for Position Player of the Month – there was no real standout. I could make legitimate arguments for four different players based on the factors of statistics, comparison to season performance as a whole, and comparison to expectations. Cole Billingsley, Rafael Palmiero, Alejandro Juvier, and Frank Crinella were all contenders for the prize, which Palmiero would have won in back-to-back months. 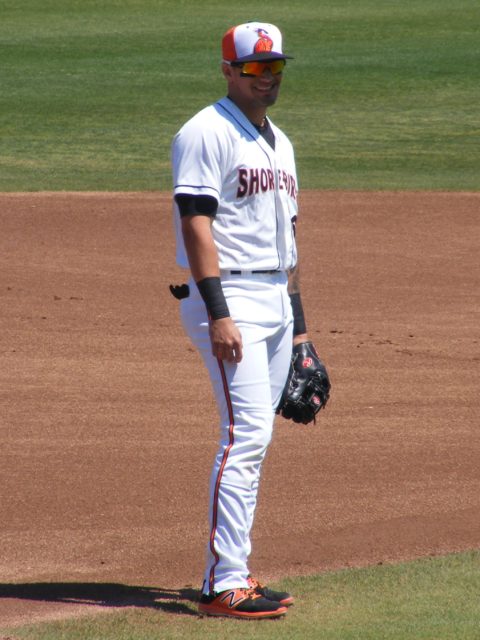 And while Alejandro Juvier started out July with a personal milestone, it was the great month preceding it that tipped the scales toward the Player of the Month honors for the versatile infielder. Juvier, who’s now played 53 games at second base, 17 at third base, and 5 at shortstop, hit a solid .288 in June (23-for-80) to lead the team in hitting, chipping in four doubles, a triple, and a home run with 8 RBI.  Stumbling along with a .221 average as the month began, Alejandro increased the mark to .244 by month’s end, setting monthly highs in most offensive categories and putting up a remarkable .760 OPS for the month (compared to a lifetime .595 mark.) Maybe the guy needs to shop for diamond rings more often.

It’s a significant improvement over the time he spent here last season, where he fell one AB short of the Mendoza line in 30 games, going 22-for-111 (a .198 average.) But aside from the 2015 season, where he somehow put together a slash line of .307/0/18/.742 OPS between the GCL Orioles (29 games) and Aberdeen (17 games), offense has been a challenge for the 21-year-old Cuban native whose family found its way to Miami and got Juvier into the Doral Academy Preparatory School, from which Juvier was drafted three years ago in the 15th round. (Juvier was the first player drafted from there; two others followed this year.) Alejandro carries only a .236 lifetime mark, and tossing out the aberrant 2015 season lowers it to a .220 number. So hitting over .280 for a stretch is big news, and worth celebrating. I’ve often noted that it sometimes takes a player a second time here to “get it,” but with perhaps the chance at another 200 or so plate appearances, Juvier could make a run at a nice mark around .260 with the same sort of effort.

Similarly to the position players, there were three pitchers I could have awarded the Pitcher of the Month distinction to. It really came down to a trio who had good months in Lucas Humpal, Steven Klimek, and Matt Trowbridge – of the three, Humpal is the lone starter. 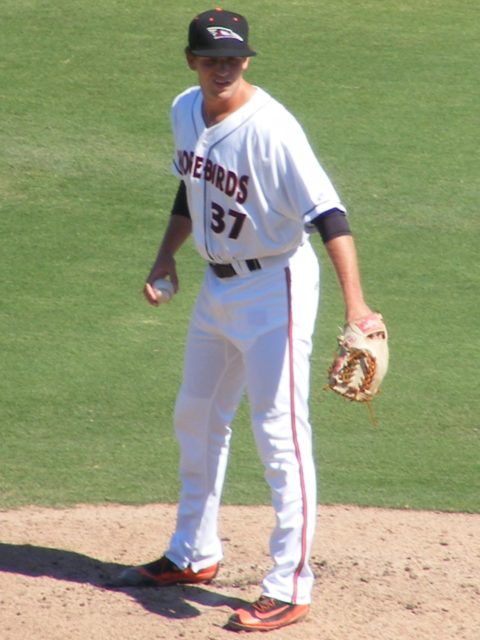 In the end, though, I opted to go with the best body of work overall and that belonged to Steven Klimek. Like Juvier, Steven spent a brief amount of time with the Shorebirds in 2016 and struggled, going 0-1 with a 6.10 ERA in 10 1/3 innings. In June Steven made seven appearances, allowing 2 runs on 10 hits in 11 2/3 innings for a 1.54 ERA and 0.86 WHIP. (The WHIP was low because Klimek walked no one while striking out 14. This goes with a 45-to-3 strikeout-to-walk ratio for the season, in 44 innings.)

Klimek had either a tie or lead in all seven appearances, and there was only one instance where he failed to keep it – Kannapolis scored a run on him June 12 to tie the game, but the Shorebirds would win it in extra innings. Thus, he had a win and two saves in the month as Klimek has become the guy for high-leverage situations. Not bad for a 33rd round draft pick out of St. Bonaventure two years ago. Klimek is actually my oldest SotM honoree for this nascent award as he’s already turned 23.

Over the years I have seen this type of pitcher a lot – a guy with pinpoint control at this level who has issues when promoted because batters become more selective. Obviously that will be a test for Klimek when he moves up, since I see no reason why he shouldn’t get a chance in the coming months. But bear in mind he struggled his first time here, so he was one of those that “got it” the second time too.

Now that I have my internet back, I should be able to resume my regular schedule and do July’s Shorebird of the Month on August 3.