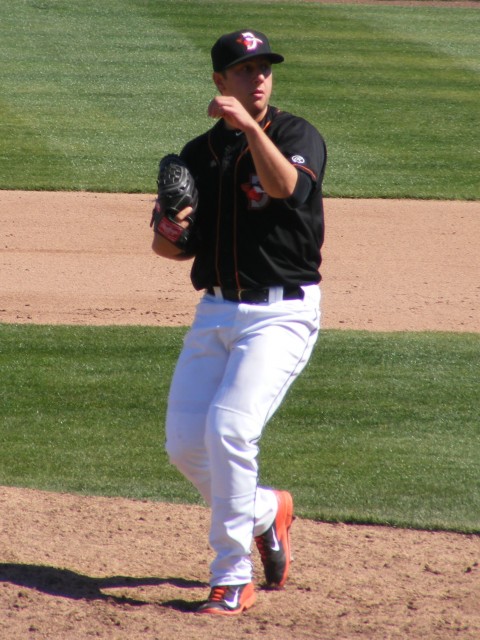 While there are several Shorebird pitchers on a hot streak right now, helping the club contend for a first half title, one who’s flying under the radar a little bit is Reid Love. But Love has shut down the opposition over his last three starts covering 17 1/3 innings, giving up just two runs (one earned) but getting just one win to show for it as he emerged victorious in the nightcap of last night’s doubleheader against Hickory. In the other two starts he left the games tied 1-1 and 0-0, both against the Lakewood BlueClaws.

Love is one of those in-between players, selected on the fringe of prospect status as a 10th round draft pick last year out of East Carolina University. Nor does he fit the body type scouts like to see for a pitcher as Love is only 5′-11″, but he is beating the odds so far. Reid made one appearance in the Gulf Coast League last year before moving on to Aberdeen for the balance of the campaign, but the numbers were only so-so: a 3-4 record with a high 5.06 ERA in 37 1/3 innings, although his 1.37 WHIP was just a little above the 1.3 leaguewide average. His best asset was a 34-to-9 strikeout-to-walk ratio, which somewhat hid the fact he allowed more hits than innings pitched.

So far this season the difference has been the hits allowed. Cutting down on those while maintaining a solid 4:1 ratio of strikeouts to walks has allowed Love to get deeper into games as a starter since he moved up from the bullpen in late April.

Reid needs to keep this string of starts going to have an opportunity to “catch up” to his peer group, which is generally at the Frederick level. Love is a little old for this level as he recently turned 24 years of age, which is also indicative of his “in-between” status between prospect and organization player. That’s not to say he won’t get a fair shot, though, as recent Oriole callup Asher Tolliver demonstrated – because of injury issues, Tolliver was still at Frederick in his age 25 season and didn’t make AA to stay until the second half of his age 26 season.

So don’t be surprised if Love is another late bloomer who makes it to the Show comparatively late in his career. Lefties who get batters out are always in demand, even if Love is running a reverse split right now (right-handed hitters are hitting just .203 against him while lefties are at a .286 mark.) If he continues his run of good pitching, Love may be a member of the Frederick Keys for the second half.