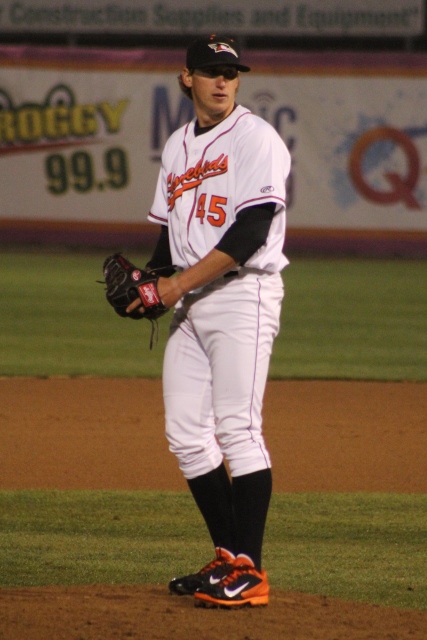 At this level, where pitchers generally are held under an innings limit, throwing complete games is a rarity – in the entire SAL last season there were only 31 thrown. This is even with the higher number of shortened games, such as those played as part of a doubleheader. Long story short, those guys who pitch in innings 6 to 8 are a key part of the pitching staff.

Zeke McGranahan is one of those guys, and in his last outing he was stretched to a career-long 2 2/3 innings against Hagerstown. Exclusively a reliever in his brief career, the 2014 23rd round pick just missed (by one spot) being the first player ever drafted out of Georgia Gwinnett College. So far in 2015 he hasn’t allowed an earned run in four appearances covering 7 1/3 innings, scattering just three hits along the way.

Zeke profiles as a power pitcher – a high number of strikeouts (10 so far) but a high number of walks as well (five so far.) It’s a continuation of his play from last season, which he mainly spent in the GCL (2-1, 1.50 in 18 innings with a WHIP of exactly 1) before getting four appearances with Aberdeen (allowing three earned runs and seven hits in five innings, a 5.40 ERA and 2.20 WHIP.) In those 23 innings, he gave up just 16 hits but walked 13. The former is great, the latter too high for advancement. It’s great that McGranahan misses bats, but he can’t miss the plate so often.

Zeke is on the older side for this level, as he turned 24 in January. But his professional career is barely 30 innings old so if he can work on improving the strikeout-to-walk ratio he will certainly be given the opportunity to catch up, as it were. And the guys who serve as the bridge between the starter and closer or soak up the late innings to back a struggling starter can be the ones who become starters (or closers) down the line. The way Zeke goes will be dictated by how he performs in his first full season.