For those who don’t know, the Maryland Republican Party had its convention “downy ocean” on Friday and Saturday.

They certainly can go upscale now that we occupy the governor’s office. 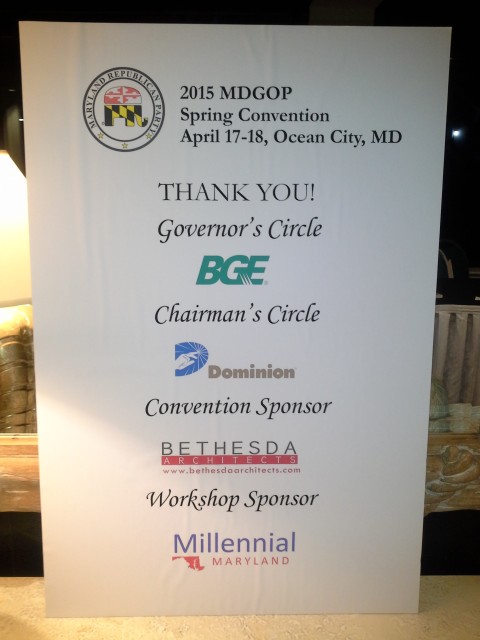 Since I didn’t have a proxy, nor could I attend anyway because I had work to do for a new employer, I decided to do the Friday night drop-in. To allocate a couple lines from an old Bob Seger song: “I headed east because I felt the change would do me good – see some old friends, good for the soul.”

Unfortunately, poolside at the Princess Royale isn’t great for photos. But truth be told, I wasn’t much into documenting the night anyway. I was having too much fun chatting up folks like my old “partner in crime” Heather Olsen, being a radio guest for Ryan Miner, and talking shop with some others. I did take a few various shots with the cell phone, but they don’t rise to the level of worth commenting on because most are dark or somewhat tiresome.

But I did receive some flak from on high about the piece I wrote Friday, being scolded because I didn’t know the whole story. Yet this bears one question: what would Joe Burns – or those four members of the Carroll County RCC who opposed the change to submitting multiple names – gain from lying or embellishing the truth? Conversely, if they are right, what does the “good old boy establishment” wing of the MDGOP lose? The ability for cronyism at will?

There’s no doubt that Joe’s idea of a properly working MDGOP is different than that of the leadership, and it’s probably a far cry than mine. But it’s my understanding that Diana Waterman chose to address this at the very end of the convention, after the expected move by the Resolutions Committee to not report any resolutions out. Been there, done that. As always, we have plenty of time for rehashes of what’s going on with the various party leaders, but not enough time to put some simmering issues to rest. I’d love to have some input from those on Resolutions to know why nothing made the cut.

Going forward, though, this is something which needs clarity. Either we allow the governor to have his way simply because he has an “R” behind his name or we have consistency in rules. After all, there was no do-over on any of the other General Assembly nominees.

One other thought I had, thanks to the presence of Don Murphy, was his belief that “you must be present to win.” Where was everyone who is considering a 2016 U.S. Senate bid? Besides Andy Harris, who had a hospitality suite upstairs, away from the pool, I wasn’t aware anyone else hosted a suite. Perhaps they were on the downlow, but now that session is over you would think we would have some movement. We already know a couple of the players lined up on the other side.

From what I heard, the party will be back in  Solomons this fall so I’m sure all those Senate hopefuls will be out of the woodwork by then – along with the umpteen GOP presidential hopefuls (more specifically, their Maryland proxies.) Hopefully we can be arguing over the merits of Dan Bongino vs. Andy Harris vs. Laura Neuman for Senate and all those who wish to clean up Barack Obama’s disaster because we will have some resolution and direction on the subjects currently at hand.

And who knows? I might just get a proxy for that one, or I might not. It was a beautiful Saturday afternoon for all but two things: working (which is what I did) or arguing politics. I only missed it a little bit, which isn’t bad considering.

It might be a good idea this fall, though, to bump the Resolutions Committee report to the front of the agenda – and bring some popcorn.