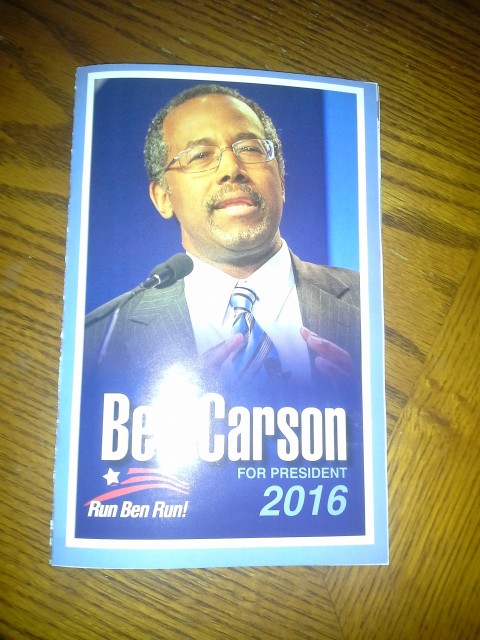 Last Saturday I received this pamphlet in the mail, something I could only describe as a full-court press to make Dr. Ben Carson into a viable Presidential candidate for 2016.

To those who didn’t receive it, here is a description: it’s a 32-page, full-color pamphlet – essentially 8 full-sized sheets of paper, front and back, with a cardstock cover, festooned with patriotic images and some descriptive text. In essence, it’s a very long fundraising letter but its stated purpose is for the reader to sign it as if it were a petition in an enclosed envelope and send it back, preferably with a personal note of support.

But wait, there’s more! I also received ANOTHER six-page fundraising pitch along with yet a third single-page cover letter, again asking for money. Not knowing just how many were sent out – I received two because another copy was inadvertently left with mine in the mailbox (it’s been sent on to the intended recipient down the road) you have to figure this operation is costing the “Run Ben Run” front group at least low six figures and perhaps even seven if the list is over 200,000 people.

So what is the pitch? The booklet claims Carson is the only one who can beat Hillary Clinton. Why?

Hillary knows that any Republican candidate who wins just 17% of the black vote makes it impossible for her or any Democrat running for President to win even one swing state.

Why am I so sure that Dr. Carson will win at least 17% of the black vote? Here’s why…

When Herman Cain ran for President in 2012, he was stunned to learn that his internal polls showed him winning more than 40% of the black vote and more than 60% of the Latino vote.

As you can imagine, the Cain campaign team was perplexed. How could Herman Cain draw huge support from both the African American and the Hispanic community running against America’s first black president, Barack Obama? It didn’t seem to make any sense.

What they concluded was that poor African Americans and poor Latinos saw in Herman Cain a man who had experienced their lot in life – being born into poverty. They believed that he understood their plight and more important, he understood how to escape poverty and experience economic success.

In short, they identified with Herman Cain.

Now, if African Americans and Hispanics identified that much with Herman Cain…

Imagine How African Americans and Hispanics Will Identify With And Support Dr. Ben Carson! (All emphasis in original.)

Oh yeah, it’s laid on just that thick and written that breathlessly throughout the pamphlet, which also includes the claim that Ben is “A Genuine Ronald Reagan Conservative.” (No conservative worth his salt can make a statement without comparing himself to Reagan.) That’s not to say the results wouldn’t be similar, but I suspect there’s a giant disconnect between the situation in 2011 when Herman Cain was planning a run and 2015 when Carson is contemplating his. Remember, Cain had at least run for office once before in a statewide race – campaign experience Carson is lacking. Something this book doesn’t cover is how Carson will fend off every liberal member of the media digging up (or making up) whatever dirt on Carson they think will stick. Any crank with a malpractice suit against Dr. Carson’s practice will walk away with their 15 minutes of fame for sharing their (probably embellished) story.

Something this book does have, though, is very sketchy bullet points on some issues.

For example, Carson “advocates cutting government spending by 10% each year, across the board, until the budget is balanced.” So defense that’s already being cut to the bone would fare worse still under Carson. It’s the problem with across-the-board cuts – things which are bloated are cut too slowly, while vital programs are starved of funds.

He would repeal and replace Obamacare while giving everyone in America an electronic medical record and pretax health savings account. That makes more sense, but still leaves me mildly skeptical.

Carson advocates a flat tax in order to “make sure that everyone has skin in the game.” I’d prefer the FairTax but a flat tax would be acceptable provided we also eliminated backup withholding. Our church doesn’t take money out of our paychecks off the top, so why should the government?

As for social issues, Carson believes marriage is only between a man and a woman and is pro-life. The book also quotes Carson on welfare:

He also points out:

While values, knowledge, and compassion are the key for getting America back on track, the most important thing is prayer.

Carson seems to get most of his support from social conservatives who haven’t been terribly thrilled with the last two Republican nominees. It’s a branch of the Republican party that the powers that be seem to take for granted, although they helped to maintain the campaign for Rick Santorum for quite awhile in 2012. Many of those southern and midwestern states (including Iowa and South Carolina) will probably be the most fertile ground for Carson if he decides to run – on the other hand, this may not play as well in New Hampshire and Nevada, although the latter would be a test case for the Hispanic vote.

The pamphlet comes on the heels of a 40-minute long infomercial which aired last month in a number of markets just after the election (and is being re-broadcast this week on the Newsmax TV network, available from satellite providers.) Carson isn’t officially in the race but isn’t preventing the speculation, either.

As for the petition: sure, I sent it in. There’s nothing wrong with Carson that the run won’t reveal, although if I were leaning toward anyone right now I would say it would be one of the governors considering a bid. But it’s good to see someone who explicitly exhibits Christian values take a shot at the brass ring.