Normally in the state conventions leading up to a primary election, candidates for elected office scurry around, gladhanding the attendees and hosting hospitality parties therein. This is the path contender Ron George has chosen, alerting those of us on his e-mail list of his intentions today. He’ll be there, but at a much smaller scale than presumable future opponent Larry Hogan, whose nascent campaign has pushed a major event and announcement tomorrow night as well.

On the other hand, a competing event in Arizona has drawn two of the other challengers. The Republican Governors Association meets there this week and both David Craig and Charles Lollar have chosen to attend that gathering instead of the state convention, with Craig making a presentation there according to campaign spokesman Jim Pettit, quoted in the Baltimore Sun.

Not to be outdone, Lollar posted a photo on his campaign Facebook page with recently re-elected New Jersey governor Chris Christie. 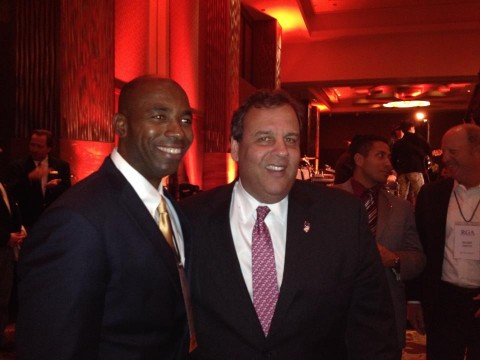 Having Craig there may help provide Lollar cover from the naysayers who chide him for skipping party events, and he promised to be back on Saturday. But going to the RGA made perfect sense for Craig, who related in July that he would lean heavily on other Republican governors for guidance.

Since Hogan’s party has the prospect of sucking all of the oxygen out of the MDGOP affair, this may not be such a bad move. Certainly there will be representatives of both absent campaigns there, but with the convention coming just before Thanksgiving the news cycle created will be relatively short.

The event for which I’ll be anxious to see participation will be the Turning the Tides 2014 conference held in the very same hotel in January. Last year’s event was outstanding and organizers are going to great lengths to top it in 2014 by extending it to a evening/day affair similar to the MDGOP conventions. We’ll see who puts it on their calendar and who risks alienating a committed conservative crowd.

One thought on “Going national”