August is the time when official Washington shuts down, the tourists take over, and those who represent us return to their respective districts. Many use the opportunity to host townhall meetings in an effort to hear from and interact with his or her constituents.

But I’m fairly willing to bet that, aside from the possible exception of Andy Harris, you won’t hear a much more conservative voice conducting a townhall meeting than former Senator Jim DeMint, and you won’t have to travel to South Carolina or the fetid swamp of Washington, D.C. to attend. As part of Heritage Action and their proactive fight against Obamacare, the former Senator will be appearing in Joe Biden’s old stomping grounds of Wilmington, Delaware. 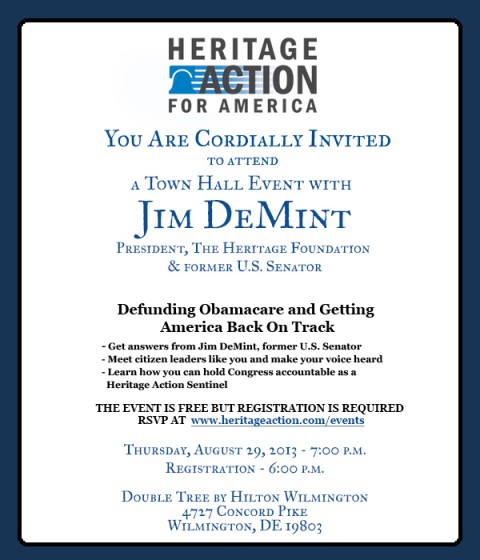 Seeing that the Eastern Shore isn’t all that far from Wilmington, this may be a good time investment for those of us interested in how some activists are combating Obamacare.

I suspect the number of former Senators will outnumber the number of current Delaware Senators at the meeting. In fact, it wouldn’t surprise me if Tom Carper, Chris Coons, and Rep. John Carney counter-program with their own meetings that night, just to try and divide and conquer the Delaware opposition, such as the 9/12 Delaware Patriots.

Too bad there’s a lot of First State residents who agree with DeMint and Heritage Action.

One thought on “A chance to speak out”