As is often the case, it was exceedingly hot, quite humid, and a sprinkle of rain fell on the Somers Cove Marina. But thousands braved all that for crabs, clams, and hot and cold running politicians. This is my story. 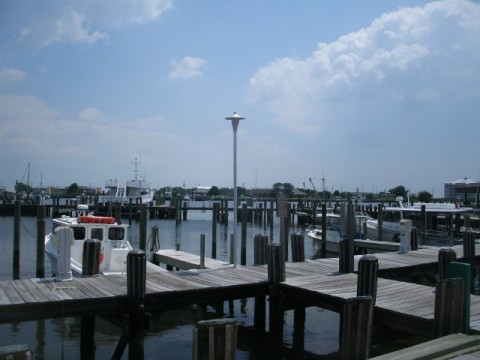 On any other summer Wednesday afternoon, one can stand near the Somers Cove Marina and see that sight. But yesterday it looked more like this. 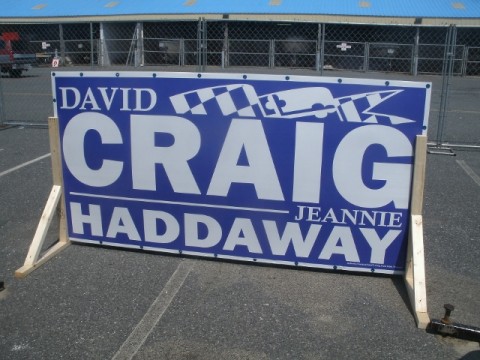 The brand new Craig/Haddaway signs were in evidence, as were a handful of shirts. 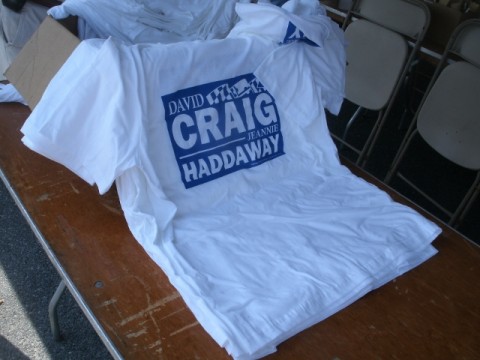 However, the pair in question didn’t show up until the event was somewhat underway. Their entrance was rather understated compared to some others, as I’ll show later. I caught them just as they entered the gate. 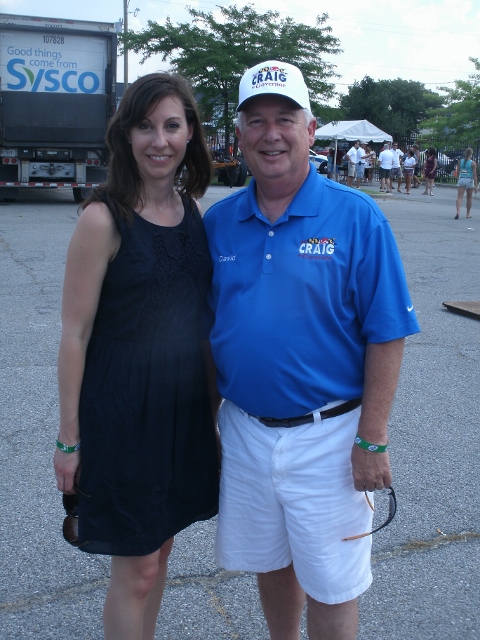 Fellow GOP contender Delegate Ron George had long been set up by then, with his own tent. 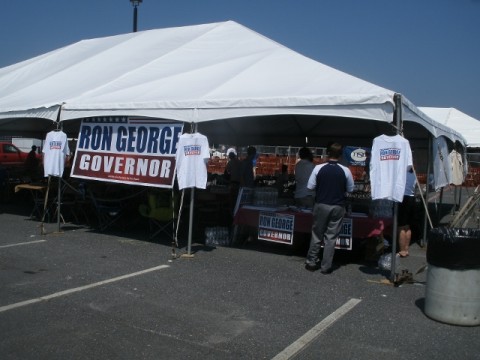 He may have had the best giveaway item as well – ice cold bottles of water stashed in a cooler behind the palm cards and brochures. 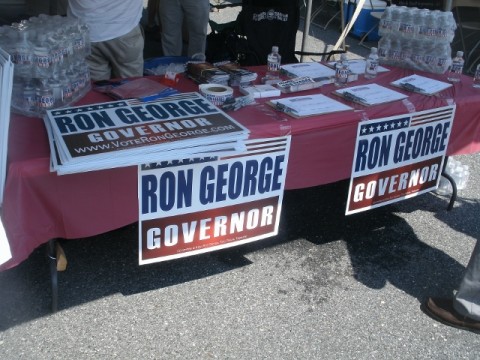 Ron proved himself to be a man of many hats. Okay, at least just a woven straw one. 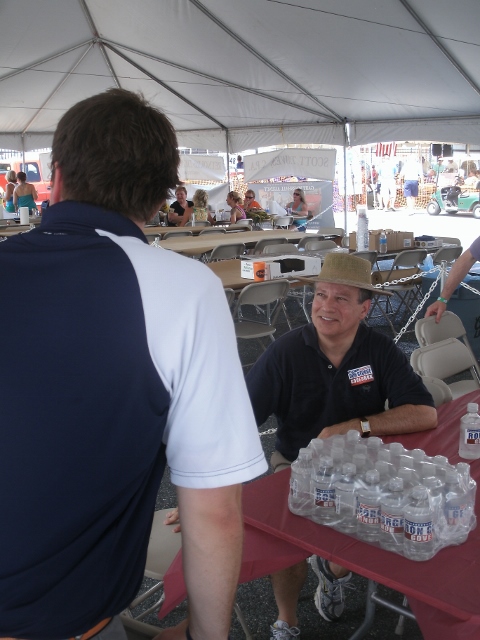 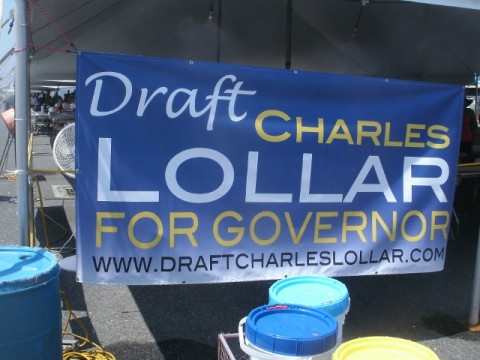 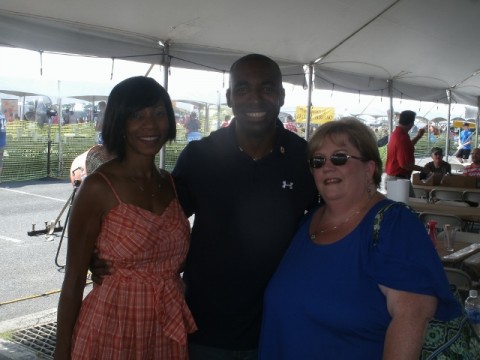 Later I caught Charles chatting with host Delegate Charles Otto (left, in hat), who represents Somerset County in the House of Delegates. 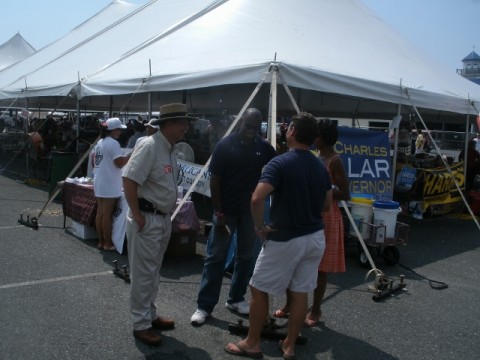 Another would-be Delegate making her Tawes debut as a candidate was Mary Beth Carozza, who’s seeking the District 38C seat. She had a few assistants in tow as well as an attractive sign. 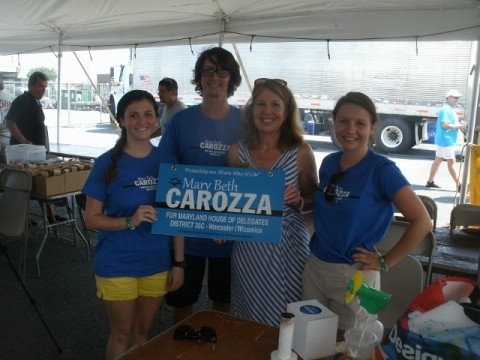 She was one of many local Republicans and activists who were well-represented in their tent. 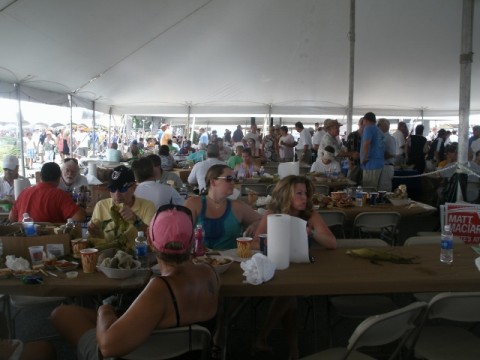 We even had the infamous “pin the tax” sign. Too bad we didn’t have it out where more could see it, but it would have been soaked by the misters thoughtfully added by the Somerset County folks. Did I say it was hot? 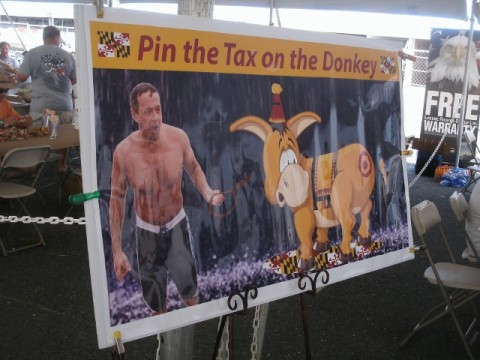 Observing all this was state Republican Party Chair Diana Waterman, who indeed was carrying a bottle of water. 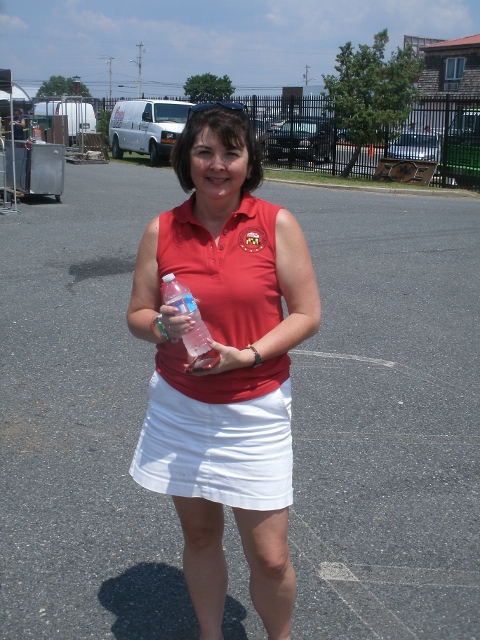 Also making a presence was Larry Hogan (right), whose Change Maryland group now boasts a 50,000-strong Facebook following. He was making no indication of a possible political run today, but it’s intriguing that he took the time and came down to Tawes. 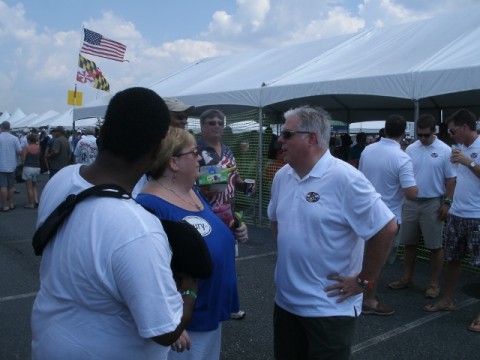 Hogan has made the point that his group is not restricted to Republicans; a significant portion are independents and Democrats. And the latter group was well-represented at Tawes, too.

Front-runner and Lieutenant Governor Anthony Brown was also casually late, but had a gaggle of young supporters trailing him. He’s sort of obscured in the center of the photo. 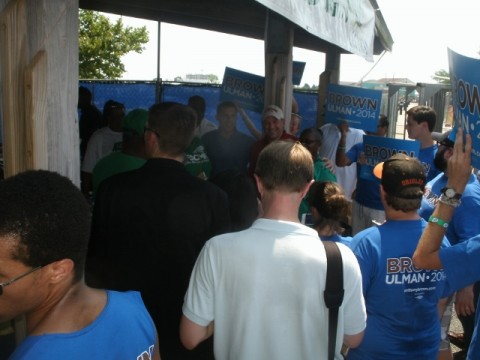 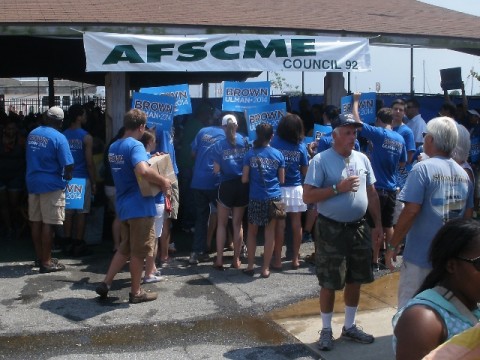 There were more modest presences from Attorney General (and gubernatorial hopeful) Doug Gansler and Comptroller Peter Franchot, who considered the race for the top spot but opted to seek re-election. (My photo of Gansler didn’t come out well.)

One other Democratic gubernatorial hopeful whose presence surprised me was Heather Mizeur, pictured here with Salisbury City Councilwoman Laura Mitchell. 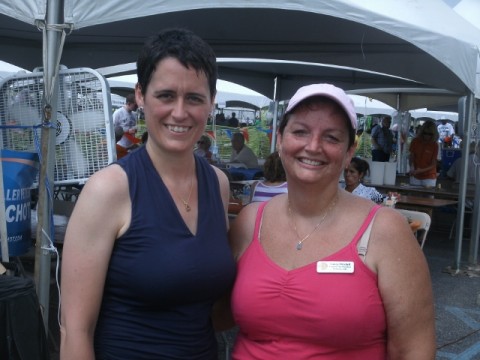 Her formal announcement must have been a brief affair, as she and a small band of supporters made the trek down to Crisfield. Mizeur told me it was about her tenth time attending – obviously first as a statewide hopeful. 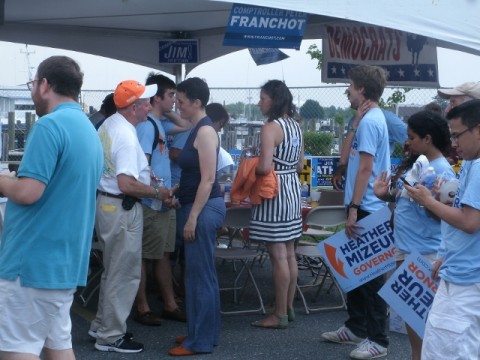 Also carrying the Democratic banner was the State Senator from District 38, Jim Mathias. He had a decent-sized group of supporters who must have been busy putting up a half-dozen 4×8 signs along Maryland Route 413 leading into Crisfield. 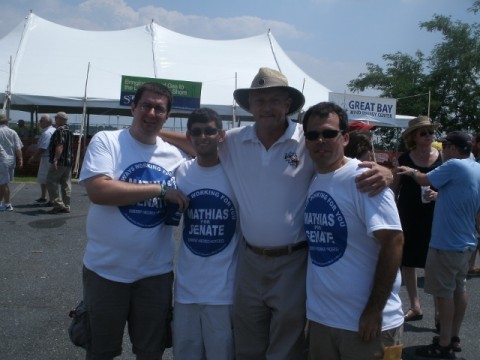 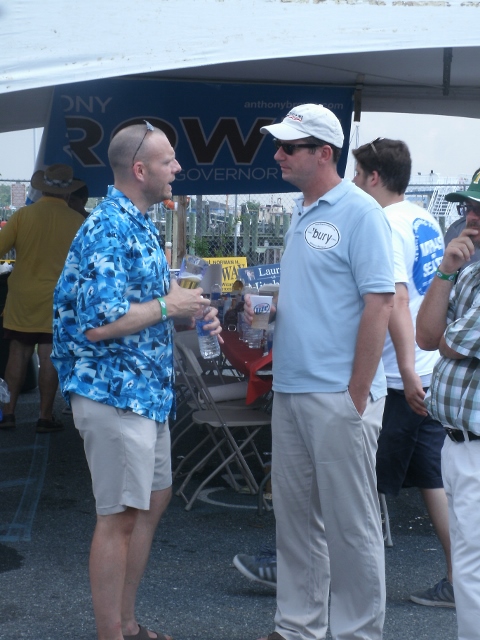 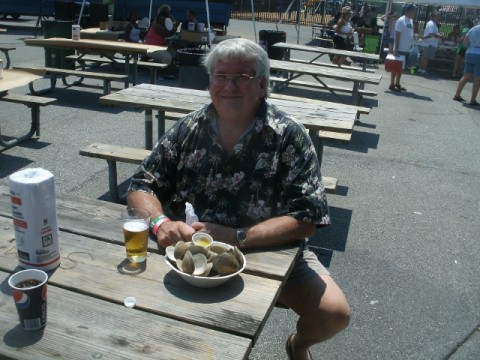 Pollitt explained that it’s easier to eat on the pavilion side because he would be greeted by more people in the party’s tent. Makes sense to me – same reason I eat a little at a time.

In fact, a large percentage of those enjoying the food were well away from the political. They were being entertained by the DJs on the left of the photo. 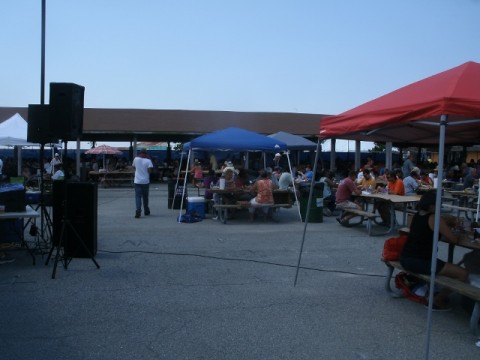 A number of other businesses were represented at Tawes as well, although to me the number seemed down from previous years. 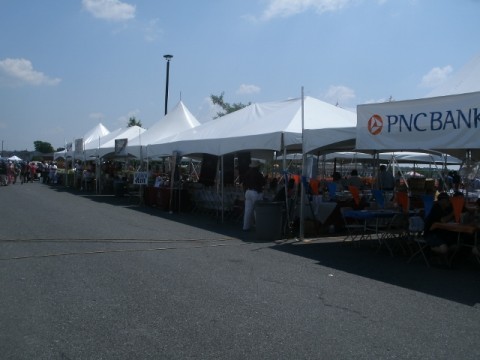 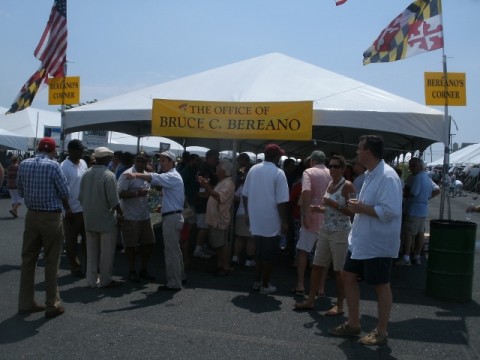 It also always has this nice touch and tribute to the late Somerset County Delegate Page Elmore. 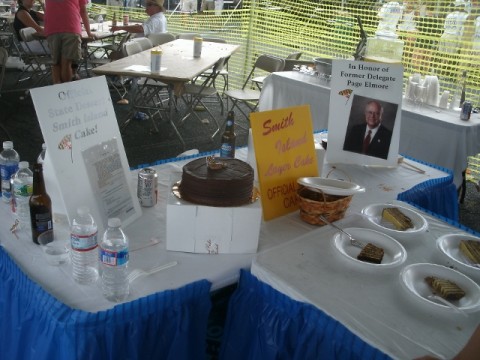 And of course, there was the media. Tawes was crawling with them. 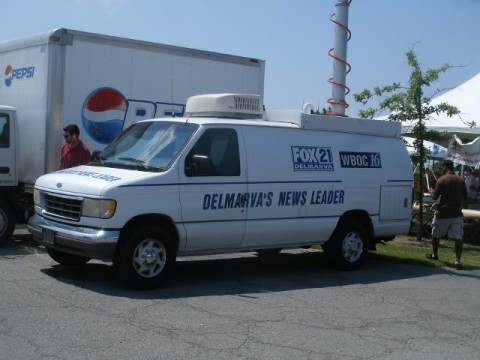 In WBOC’s case, not only did they have the remote truck and the flyover by Chopper 16, the ‘Outdoors Delmarva’ crew was there too. Also covering the event was competitor WMDT-TV channel 47, WBAL radio, and reporters from the Salisbury Daily Times and Baltimore Sun, among others I probably missed.

That doesn’t count the alternative media. The Red Maryland crew was interviewing a number of Republicans – here it was Ron George’s head fundraiser Hillary Pennington of Stratgic Victory Consulting. 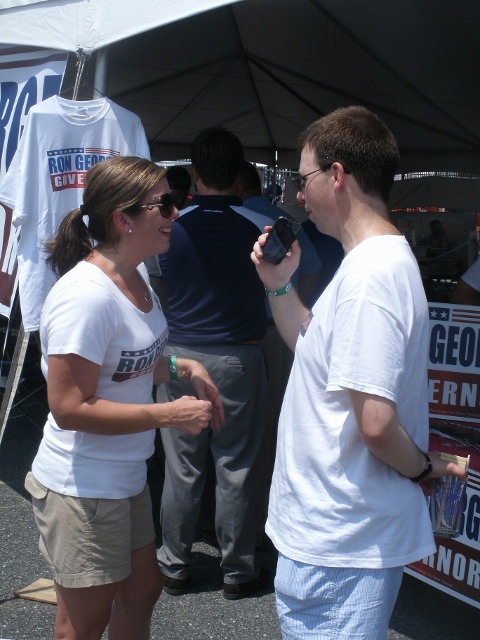 Brian was also kind enough to query me, so we’ll see if mine made the cut this evening.

Eventually the crowd began to trickle out and another year’s Tawes event was in the books. There was actually a light shower as I was leaving, which didn’t bother me in the least. A lot of fellowship and fun was had by all.

The vibe of the event promises to be different next year. An earlier primary now means that the Tawes event will occur once the major party nominees are known, so it’s uncertain how much time and expense they will invest in the gathering.

One other note of interest: while I did see Blaine Young there this year, the presence he had was minimal. This leads me to believe he may be stepping aside from the gubernatorial race to concentrate on a local run; otherwise he would have had a tent space as he did last year.

Speculation aside, the Crisfield Chamber of Commerce put on another wonderful event – kudos to the volunteers who make the event one the late Governor can indeed be proud of.