Apparently there is a letter being sent to Maryland Republicans from Anthony Marsh, who is one of us but has decided to vote for independent candidate Rob Sobhani. I disagree with Marsh’s choice, but that’s his right as an American. The photo comes from Dan Bongino’s Facebook page, but I don’t know the source. I didn’t receive a copy of the letter myself. 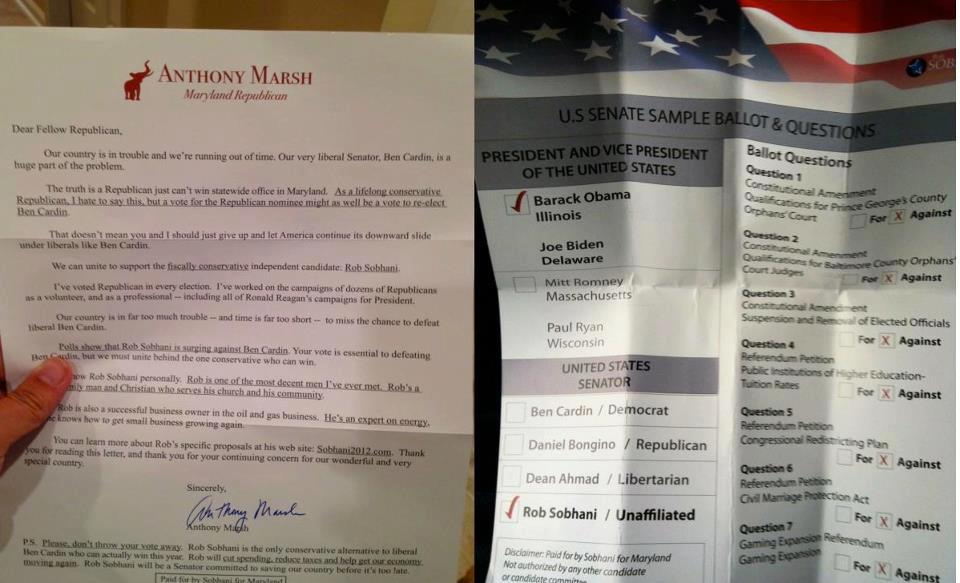 Of course, I look at these things with suspicion considering the source and how far this falls from the typical Republican thought. So I looked up Anthony Marsh to see how loyal of a Republican he is, and insofar as federal donations go he is indeed straight-line GOP.

But there was one thing the letter reveals about Anthony Marsh – he’s a political consultant. And given the factoid he’s written a book on how to write copy that gets votes it’s obvious he’s putting his talents to work.

Moreover, I found it interesting that Marsh has worked on political campaigns in several farflung places like the Middle East and the former Soviet Union – precisely the same places where Rob Sobhani has made his biggest deals. Is Marsh looking for another “in” to these regions by working with Sobhani?

Marsh is also interesting as a big supporter of Michael Steele, including these laudatory articles he wrote in 2009. Ironically, in one Marsh writes:

…to take back Congress Republicans have to run smart, upstart campaigns that aren’t afraid to use surprise and aggressive tactics. Republicans can’t win by running campaigns as if the GOP were still in charge. Newsflash to GOP candidates: no one is going to parachute into your district with $4 million this election year.

Well, Rob Sobhani did – unfortunately, he’s spending it in a manner that’s crippling the Republican candidate. And since the guy can’t even do a robocall properly – forgetting the obligatory disclaimer and authority line – it’s truly a question of whether this guy is ready for prime time. (Notice that this robocall hasn’t piqued Ben Cardin’s interest, but he noticed the last large-scale robocall without an authority line. That whole faux-voter suppression issue seemed to be the only thing which woke Ben up from a six-year-long stupor in the Senate.)

It’s a sad way to end a campaign with such promise. TEA Party Republicans have developed somewhat of a reputation as being the ones who won’t moderate their views and cost our side elections, but you can’t blame our side for this one. Nope, that tar brush needs to paint the mushy middle and those who wouldn’t stand behind our nominee. This one is on you for undercutting Dan Bongino and making the road to GOP victory that much more difficult.