Updated at bottom, but as predicted early voting was extended through Friday, November 2.

Due to the possible effects of Hurricane Sandy, Governor Martin O’Malley has issued this statement:

Governor Martin O’Malley (Friday) issued an Executive Order declaring a state of emergency with respect to Hurricane Sandy.  Depending on how the storm develops, Hurricane Sandy may have an impact on early voting, which is scheduled to take place between Saturday, October 27 and Thursday, November 1.

The Election Law provides that “[i]n the event of a state of emergency, declared by the Governor in accordance with the provisions of law, that interferes with the electoral process, the emergency proclamation may:  (1) provide for the postponement, until a specific date, of the election in part or all of the State; (2) specify alternate voting locations; or (3) specify alternate voting systems.”  Md. Code Ann., Election Law Article, Sec. 8-103(a).

The Governor’s Office and the Maryland Emergency Management Agency are actively monitoring weather developments in order to determine whether changes to the early voting schedule may be necessary to protect public safety.  In the meantime, the State Board of Elections, the local boards, and all early voting locations should continue their preparations for early voting and ensure that all voting sites remain open and that all election staff report for duty.

As the storm stands at the moment (I’m writing this late Saturday night) the biggest impacts could come Monday into Tuesday, although deteriorating conditions may force a shortening of Sunday hours as well. My best guess is that whatever days are scrubbed will be added onto the back end, so losing Monday and Tuesday will likely mean early voting is extended into Friday and Saturday of this coming week.

Locally this may not matter as much since the Civic Center is also a polling place on Election Day (it just happens to be mine, so I know this.) But there may be other venues where interceding events place an extra financial strain on local boards of election which didn’t anticipate a change in schedule at this late date. It may also affect turnout slightly as two of the slower days of early voting are traded for two days with the potential for more activity, with an extra weekend day. Still, perhaps 80 to 90 percent of the in-person votes will be cast on Election Day itself.

Yet judging by this picture from Saturday interest in this election in general is high (h/t Jackie Wellfonder): 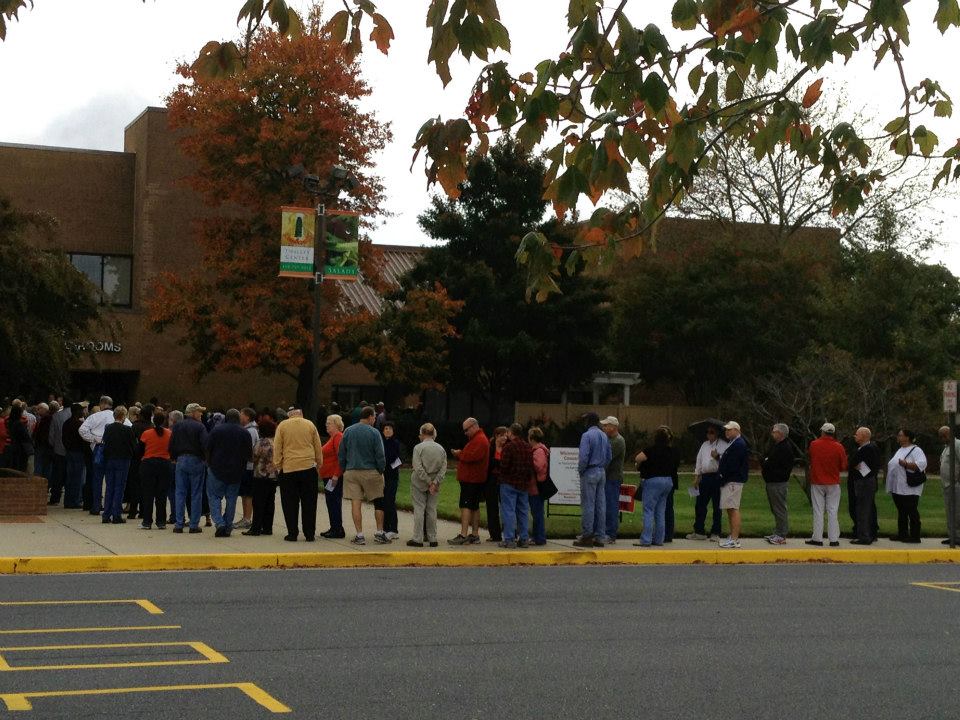 I don’t suspect the lines will be as long on Sunday and may not be present at all Monday and perhaps Tuesday. But there are a lot of people who want to vote; let’s hope they choose wisely.

Meanwhile, there are two other local events which could be jeopardized by Hurricane Sandy: a townhall meeting Andy Harris scheduled for Monday evening in Fruitland and the U.S. Senate debate on Tuesday afternoon at Salisbury University. If I still have power I will strive to keep readers abreast of developments in both.

Update, Sunday 1 p.m.: Judging by these two Facebook pictures, early voting has heavy turnout again today. No word yet on whether voting is postponed for tomorrow and Tuesday.

Update, Sunday 2 p.m.: The Harris townhall slated for tomorrow has been scrubbed due to weather, according to the Congressman’s Facebook page. Same goes for early voting Monday, per an announcement from Governor Martin O’Malley.

Update 3, Sunday 5 p.m.: The PACE debate at Salisbury University involving the U.S. Senate candidates is another casualty of the weather.