I actually meant to do this post over the weekend, but real life intervened. I’m hoping the expanded version of items which are really too short to merit a full post but worth a couple paragraphs is more chock full of interesting because of it. 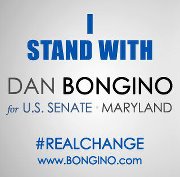 There is one item on my agenda that’s time-sensitive, so I’m going to fold it into an overall brief update on Dan Bongino’s U.S. Senate campaign.

During our “Now or Never” event, you will be able to make donations designated specifically to get Dan’s campaign advertisements on radio, television and the Internet. These ads are a crucial part of our get-out-the-vote efforts and you will have the unique opportunity to choose the media outlet on which you wish to see the ads run. (Emphasis in original.)

So if you donate you get to choose. (I vote for advertising on this website. Is that an option?)

Unlike some others in the race, Dan’s campaign has been the closest to the grassroots and certainly has worn through the shoe leather. Regardless of the perception about where Dan stands in the polls, I think the voters’ brief flirtation with Rob Sobhani is coming to a close as they find out there’s not a lot of substance behind the sizzle.

I didn’t note this at the time, but since the Benghazi massacre is still in the news it’s noteworthy that Dan is among the chorus who thinks heads should roll:

I take no comfort in this, but Secretary Clinton and Ambassador Rice must resign in light of the Benghazi tragedy. It was a tragic failure in leadership.

He went on to decry the “current administration’s position that politics takes priority over security for our men and women in the foreign service.” Given the fact that Hillary Clinton now insists on taking full responsibility, it indeed behooves her to resign her post.

I’ve also found out that Dan will be in the area twice over the next couple weeks. On Thursday, October 25 he will be the beneficiary of a fundraiser here in Salisbury at the local GOP headquarters, tentatively scheduled from 6:30 – 8:30 p.m., and on Tuesday, October 30 the PACE group at Salisbury University is hosting a U.S. Senate debate in their Great Hall at 3 p.m. That’s sort of an unusual time to have an event such as that, but it is what it is.

And apparently Dan has had his fill of complaints from Sobhani about Rob’s debate exclusion. This comes from Dan’s Facebook page:

Regarding the debates schedule, there is no effort to keep the candidate out of the debates. His campaign is fabricating stories in an attempt to distract from his confusing platform… Any forum he was not included in was due to the fact that he was not invited by the host.

I’ve spoken to the campaign about this issue and any assertion that Dan doesn’t want Rob Sobhani in the debates is completely false.

Speaking of debates, this is one which just might be crazy enough to actually work.

Created by the TEA Party Express group, this is the debate where the moderators are conservative. Of course, none of the nominees or incumbents will actually participate – but in this era of YouTube and 24-hour media coverage, video is a wonderful thing. Honestly, it’s simply going to serve as a reminder of where candidates have said they stand on key issues ignored in the other debates.

But I don’t think these guys are going to play it as comedy, like taking single words and catchphrases carefully spliced together like a shock jock might. Given some of the names already announced as participating in the event, it may come down to being just as informative as the real thing – and in many cases, Barack Obama actually will get to have his teleprompter.

This event will occur next Tuesday night, October 23, at 9 p.m.

Following up on a post I did a few days ago on Protect Marriage Maryland endorsements, the group has added Fourth District Congressional candidate Faith Loudon to its preferred candidates. No real surprise there, and if it chips a few percentage points off an otherwise monolithic black vote for Donna Edwards, so much the better. Hopefully they’ll also vote against Question 6 as well.

Meanwhile, those who support Question 7 may have stepped into some hot water with this ad.

Now LaVar Arrington can do as he pleases, but FedEx is none too happy about their logo being prominently featured as part of the spot. Spokeswoman Maury Donahue said her company will review the ad, but they have no involvement in the issue.

But it appears the Washington Redskins do have a role, according to a Capital Gazette article questioning a $450,000 payment to the team just days before the ad was taped. It also gave Maryland Comptroller Peter Franchot, a Democrat and Question 7 opponent, an opening to remark on the team’s involvement:

As a ‘Skins fan, the Comptroller respectfully encourages them to focus on the important tasks at hand, such as protecting RG III, shoring up their kicking game and making sorely-needed improvements to one of the league’s lowest-ranked defenses.

I’d be more interested in what the NFL has to say considering their stance on gambling, and that’s likely why they had to choose a player who’s no longer active. Much as Arrington hates losing, he may well end up on the short end of the score November 6.

Unlike Questions 4, 6, and 7, which have seen a healthy amount of media coverage, Question 5 on redistricting has been the red-headed stepchild of the quartet. But State Senator E. J. Pipkin is trying to change that a little bit:

It’s just a little bit longer than a 30-second ad, which makes me wonder how many will see this video. But this makes a lot of sense considering the Maryland Democrats who put this together definitely flunked the “compact and contiguous” requirement.

But let’s not flunk the idea of protecting the vote. Election Integrity Maryland is holding one final poll watcher training session:

Election Integrity Maryland is offering its last Poll Watcher Training session before the election, on Wednesday, October 24 – Thursday, October 25.  This comprehensive, 1-1/2 hour course is taught via webinar from the comfort of your home computer from 7:30 – 8:15 each evening.

Registration is required.  The cost is $15, which includes a spiral bound Training Guide mailed to each participant.

Signup is here. Now I prefer to work outside the polling place in an attempt to change hearts and minds, but you can provide a valuable service to your fellow citizens in this way as well.

We know that the other side is ready to go (h/t Don Stifler): 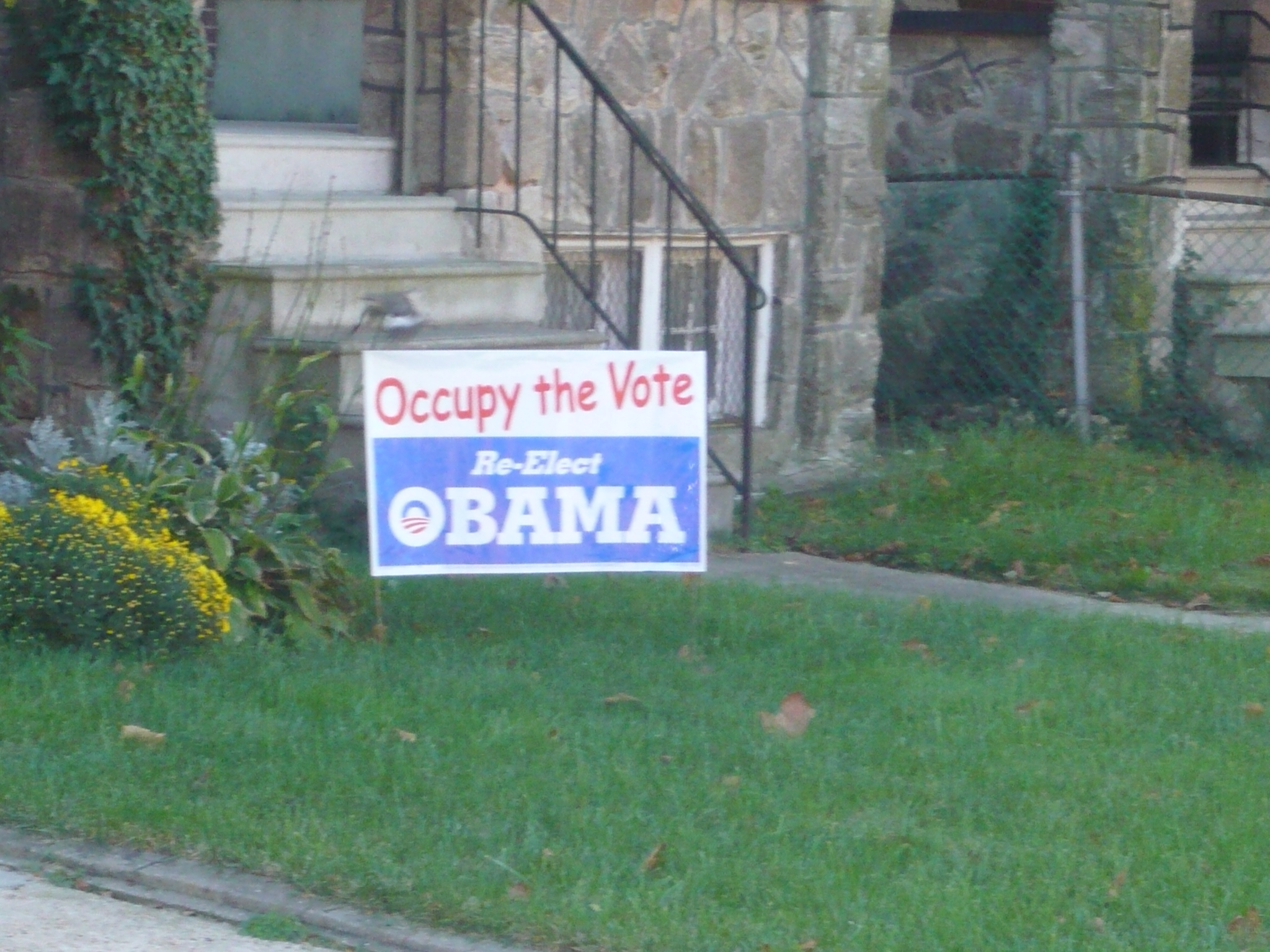 I’ll definitely occupy my vote this year, and you can bet your bottom dollar it won’t be for that failure named Barack Obama.

Finally, another requirement the Democrats in charge of Annapolis seem to be flunking is honesty in economic reporting. Instead of giving us the real news – which has been generally bad – they’re resorting to obfuscation. Jim Pettit at Change Maryland sent this along to me last week:

Maryland Governor Martin O’Malley recently hosted an Annapolis summit for advocates of what is called a “Genuine Progress Indicator.”  The national forum received scant media attention and the issue itself has largely been under the radar of most mainstream media outlets.

The impetus behind the Genuine Progress Indicator, or GPI movement, is to supplant traditional federal government statistics with new and arbitrary criteria that deducts what other government bureaucrats deem as environmental and social costs that accrue from prosperity.

(Read the rest here. They also have a helpful fact sheet.)

Maryland is one of two states which have enacted a form of this method of statistical legerdemain, as Vermont signed this into law earlier this year.

Obviously Larry Hogan and Change Maryland delight in being a thorn in Martin O’Malley’s side, but the real question is why this is even being considered in the first place. To me, it comes from the same line of thinking which believes rural development should be shelved in favor of promoting “greenways” and packing people into urban centers so they can “improve” our “quality of life.”

But regardless of every statistic which can be measured, there is no way government can insure happiness. To use a baseball analogy, even if a pitcher absolutely owns a hitter to the tune of the batter being 0-for-20 against him that’s no guarantee the next at-bat won’t produce a home run. The radical Left can disparage capitalism all they want, and I’ll admit it sometimes doesn’t work very well. But these mistakes can be easily rectified by the market, and there’s no need for government to intercede. GPI is just an excuse for a greater attempt to control outcomes, with the folly of believing in equality of outcome uppermost in their minds.

It all goes back to that old saw about lies, damned lies, and statistics. When it’s in someone’s vested interest to cook the books we all know what sort of trouble can ensue. But I don’t need numbers to see that people are hurting, and it’s not from capitalism but instead from the lack thereof.

One thought on “Odds and ends number 61”