More dollops of blogworthy goodness, neatly bundled up in short, paragraph-or-three packages. I put them together and you raptly absorb them. It seems to be a good formula.

If you believe it’s time to ditch Dutch, you may want to know your contributions are paying for this. Here’s 30 seconds from State Senator and GOP hopeful Nancy Jacobs:

Now this is a good message, but oh! the cheesy video effects. It sort of reminds me of the Eric Wargotz “Political Insidersaurus” commercial, which had a message muddled by production. Sometimes people try too hard to be funny, but that shot of Dutch peeking around the Capitol dome might have the same effect clowns do on certain people who find them creepy.

A longer form of communication comes from a filmmaker who somehow got in touch with me to promote his upcoming documentary. It may not be “2016: Obama’s America” but Agustin Blazquez is an expert on communism, having left Castro’s Cuba as a young man nearly 50 years ago. 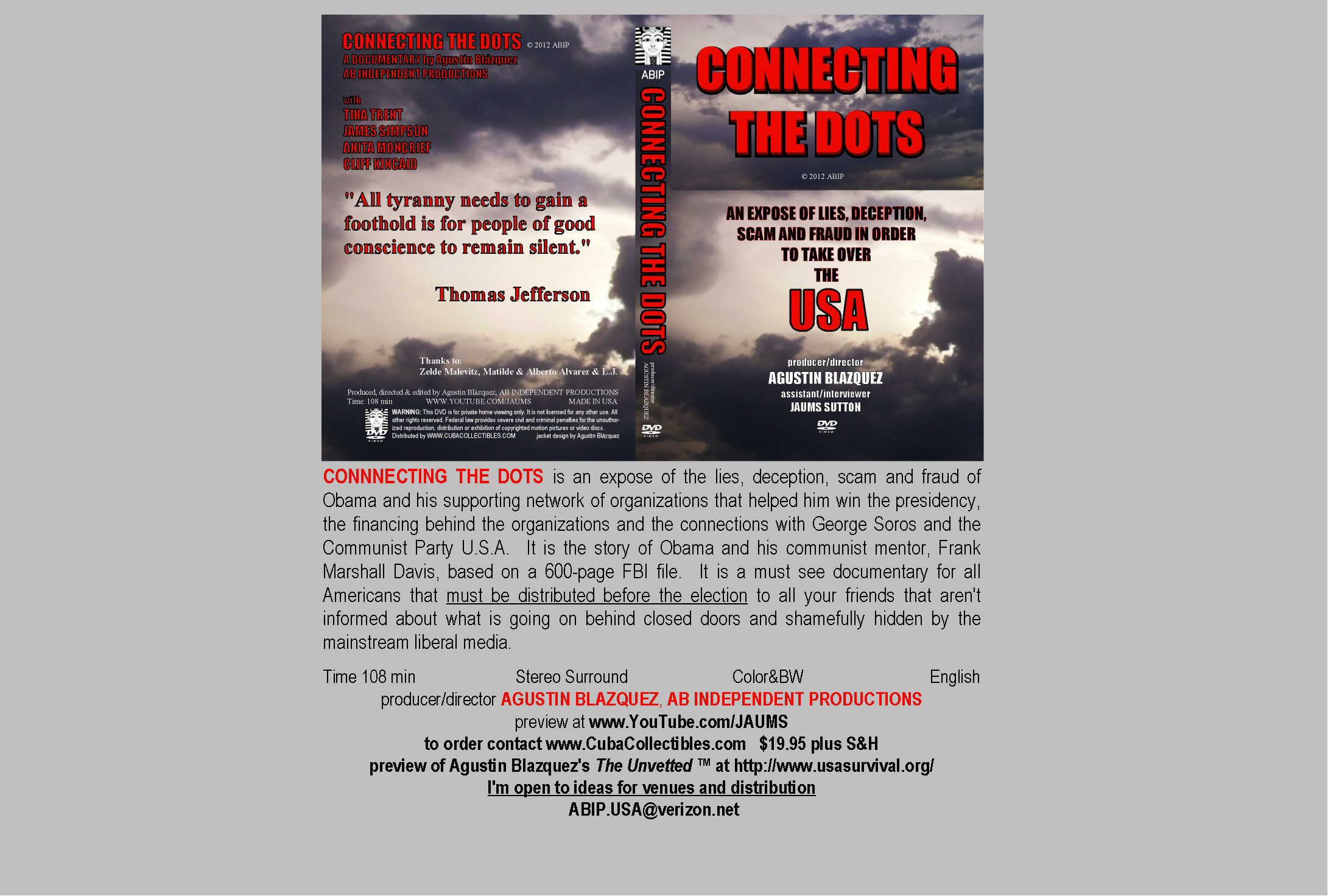 Perhaps it’s hard to read, but the gist of the film is that it exposes “Obama and his supporting network of organizations that helped him win the Presidency…and the connections with George Soros and the Communist Party U.S.A.”

I’m not going to speak to the merits of the film because I haven’t seen it. But this is a good opportunity to relate something I’ve encountered in my personal experience – the ones who seem to be most concerned about America’s slide leftward are those who have experienced Communist oppression firsthand, risking life and limb in many cases to escape to America. And they have no desire to go back.

One more video in that vein is the most recent web ad from First District Libertarian candidate Muir Boda.

One may debate whether we have a purpose for being in Afghanistan and Iraq, although in both cases we are in the slow process of withdrawing. But Boda goes farther and talks about rescinding foreign aid entirely, and that changes the terms of the debate dramatically. We can also include the idea of withdrawing from the United Nations in there.

It’s unfortunate that Andy Harris has chosen to skip the debates this time around because, in the wake of the Chris Stevens murder in Benghazi (“Obama lied, Chris Stevens died”: new foreign policy slogan) the time has come for a robust debate about how we treat both foreign relations and our dealings with Islamic extremists such as the ones who attacked our compound there.

Meanwhile, we also have to worry about our own border security in the wake of the killing of Border Patrol Agent Nicholas Ivie last week. The Center for Immigration Studies rushed out their assessment of the situation, which bolsters an argument that we need to mind our own borders. They add:

Nicholas Ivie’s name is now added to the large and growing list of individuals killed on both sides of the border as a result of failed and corrupt policies.

We need border security, but perhaps it’s time to be more libertarian and consider the impact of our War on Drugs. I can’t promise it would eliminate the Mexican cartels, and honestly their battles with a corrupt Mexican government may end up as a civil war on our doorstep. But one also has to consider what the crackdown does to American youth as well.

You’ll note I panned Andy Harris for his apparent refusal to debate a couple paragraphs ago. That works for both sides, and especially so in the wake of Barack Obama’s recent debacle.

Regardless of where we stand on the issues, this election is not about where we both have been, it is about where we are going.  The citizens of our district reserve the right to witness the passion I encompass when I know our rights are in jeopardy.  Representative Steny Hoyer has lost this spark and is merely a smoldering ember underneath the smokescreen of his 45 years as an elected official in Maryland.  It’s time to blow the smoke away and ignite a new fire.

That’s because Hoyer knows he has some built-in advantages: the power of incumbency along with the franking privilege, a willing and compliant press, and lots of money in the bank to create 30 second commercials. In a debate he can’t control the narrative, and that’s a position of a politician who knows he’s not as popular as he may let on.

I would expect that attitude of arrogance mixed with fear from Steny Hoyer, who’s long past his sell-by date, but I hoped Andy Harris would be better than that.

In Hoyer’s case, this ad from Americans from Prosperity should be beamed into his office. It’s simple but powerful in its message.

Time to try something different indeed. I received a number of reactions to the latest unemployment report, including ones from the Competitive Enterprise Institute and Lt. Col. (and Congressman) Allen West which flat-out accused the Obama administration of making it up. That’s okay, the Democrats lie on Medicare too.

Even Andy Harris responded, noting that:

I agree with what Vice President Joe Biden recently said when he stated that the middle class was “buried” over the past four years.

That is why the House voted to stop President Obama’s tax hike proposal on small business owners and the middle class, which would destroy over 700,000 jobs. We need the President and the Senate to work with House Republicans instead of continuing to promote job-destroying policies that the American people can no longer afford.

Even before the unemployment figures came out, though, the Republican Study Committee hammered President Obama and the Democrats for incomes which had fallen faster during this so-called recovery than during the preceding recession, particularly at a time where gasoline prices are skyrocketing.

The jobless recovery even extends to Wicomico County. As local researcher Johnnie Miller writes in an e-mail I obtained:

Wicomico has 132 fewer workers this year as compared to the same period last year – (08/12 vs. 08/11).  Even though the unemployment rate has declined in Wicomico from 8.8% to 8.2% – the real indicator points to the fact that those receiving unemployment checks have now exhausted their benefits and still not found jobs.

More alarmingly, somehow the county lost 1,613 workers from their labor force between July and August. 190 of them simply disappeared off the unemployment rolls as well, allowing the county’s unemployment rate to drop to 8.2%.

If this is recovery, I’d hate to see a depression. I could only imagine what the county’s U-6 unemployment rate would be.

I suppose there’s the possibility that these employment rolls may have been kept up like voter rolls are – perhaps they forgot to remove a few deceased workers. After all, the deceased really can vote in Maryland, according to the watchdog group Election Integrity Maryland:

While just scratching the surface of voter roll research, having looked at 35,000 voter registration records so far in Maryland, EIM has discovered 1,566 names of deceased still on the voter rolls.  Of these names, apparently two voted and three registered to vote after their deaths.

Talk about a serious case of rigor mortis.  But there are about 3.5 million registered voters in Maryland so if you extrapolate the numbers in a statewide race that’s 200 voters who would have been discovered, not the mention the potential for 156,600 zombie voters. It’s long past time to cull the voter rolls AND enact photo voter ID.

But let’s go back to the economy for a little bit, since those dead voters seem to be among those supporting a Governor who seems to be killing Maryland’s prospects for economic recovery in the next decade.

We are very familiar with Martin O’Malley putting out falsehoods about his own record when it comes to Maryland’s economic performance. Maryland is a laggard in economic performance in our region, so he compares us to states like Michigan and Nevada.  The difference in those hard-hit states is that there top elected officials are dealing with structural problems in their economies while our Governor enjoys seeing himself on TV and making partisan attacks.

Martin O’Malley does seem to suck up a lot of airtime these days. I’ll bet a debate with him and Larry Hogan would be fun to watch in much the same manner some watch NASCAR rooting for the 14-car pileups. We all know the engineer of that train wreck would be Martin O’Malley, so the trick would be seeing if Larry Hogan could keep a straight face during all that. I’m sure I couldn’t.

What I can do, though, is leave you on that note as my e-mailbox is in much better shape. I do have some Question 7 and SB236/PlanMaryland/Agenda 21 items to discuss, but those merit their own posts. Three score odds and ends are in the books.