In front of about 50 diehard lovers of freedom who decided the fate of their country was more important than a Ravens game – which meant they had their priorities in order – the Wicomico chapter of the Maryland Society of Patriots met Thursday night at Mister Paul’s Legacy Restaurant. 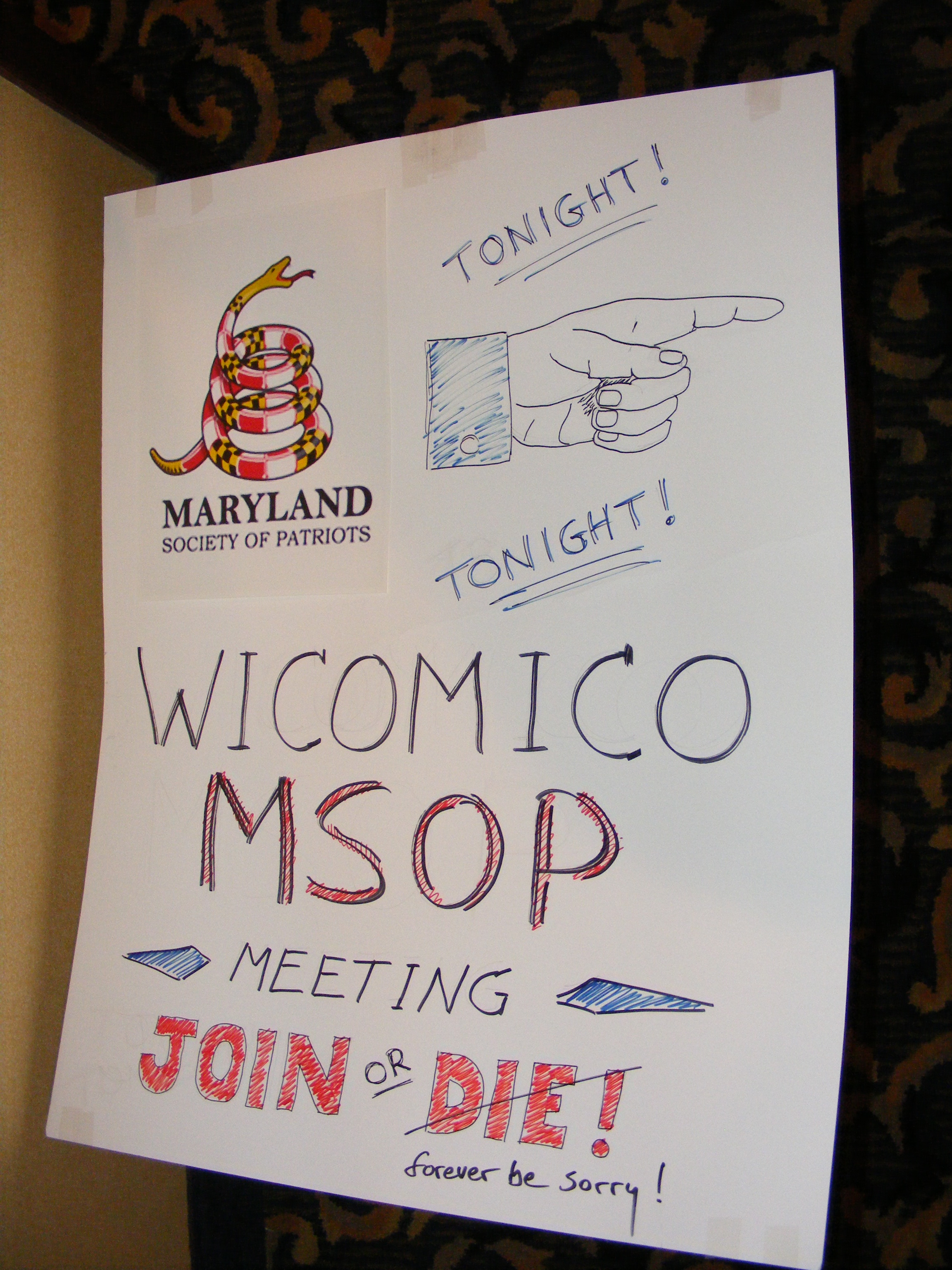 I’m sort of glad they modified the choices at the end. Anyway, Dr. Greg Belcher, the leader of the WMSOP, opened the meeting by bringing up the subject of an upcoming petition drive which had copies on each table, including mine. Sorry the picture is a bit blurry, but I’ll bring you up to speed in a moment. 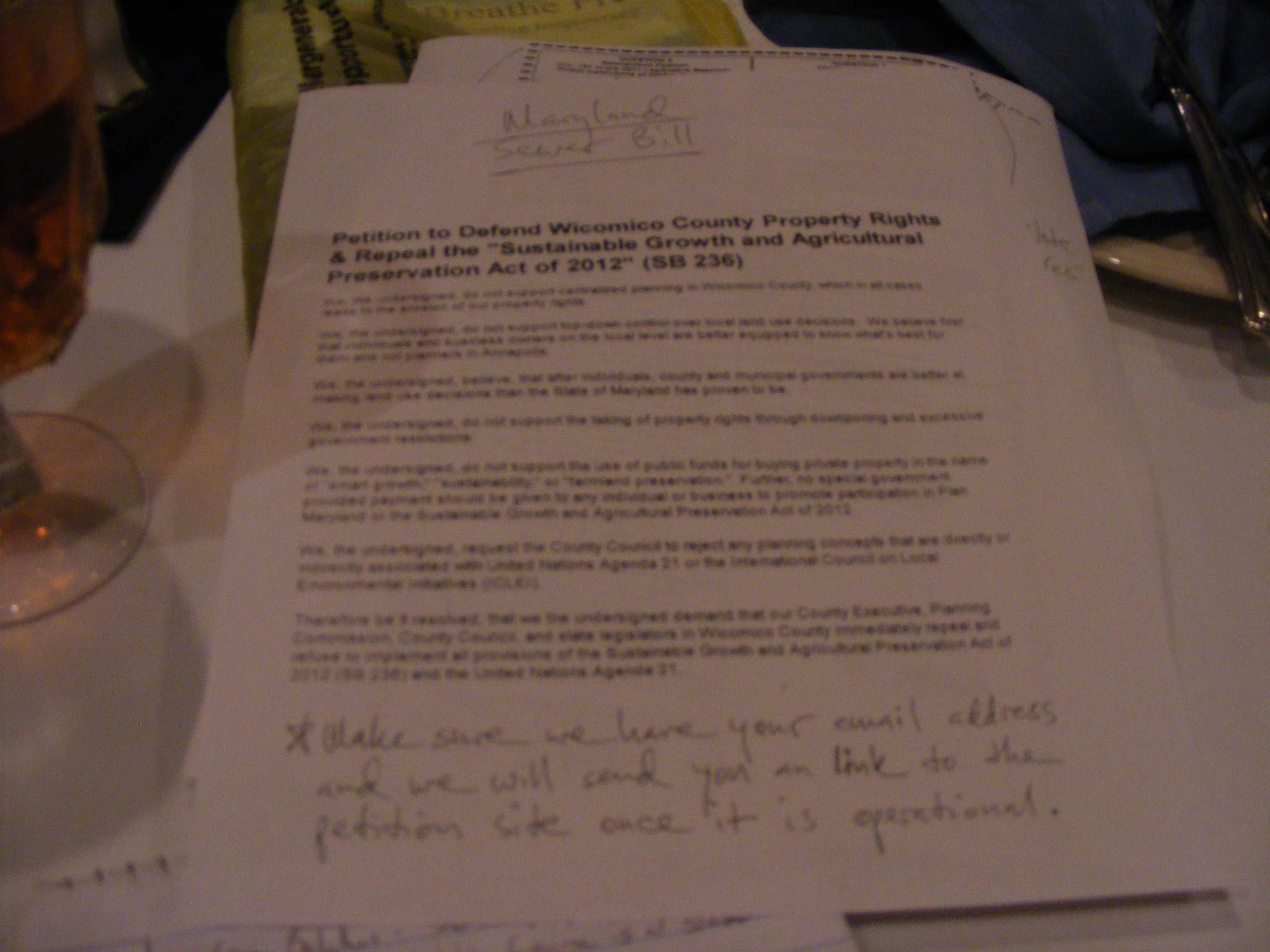 Senate Bill 236, which passed in the 2012 regular session, is thought of as an extension of the PlanMaryland and UN Agenda 21 movement to revoke property rights. In fact, Belcher intoned that “our property rights future is at stake.” All 24 Maryland jurisdictions, including Wicomico County, are supposed to have the prescribed four-tier plan in place by December 31 of this year.

Next with remarks was local activist Cathy Keim of Election Integrity Maryland, who reminded us that there are two more online poll watcher training seminars coming up: October 1-2 and 24-25. While this training isn’t required to be a poll watcher, it’s helpful to know what can and can’t be done, said Cathy.

Keim briefly went over the seven statewide issues on the ballot this November, with a particular emphasis on the latter four. “Martin O’Malley will look pretty silly (running for President in 2016) if we stop him” in 2012, added Keim.

She mostly reserved comment on Question 6, though, to the next speaker: Robert Broadus of Protect Marriage Maryland. 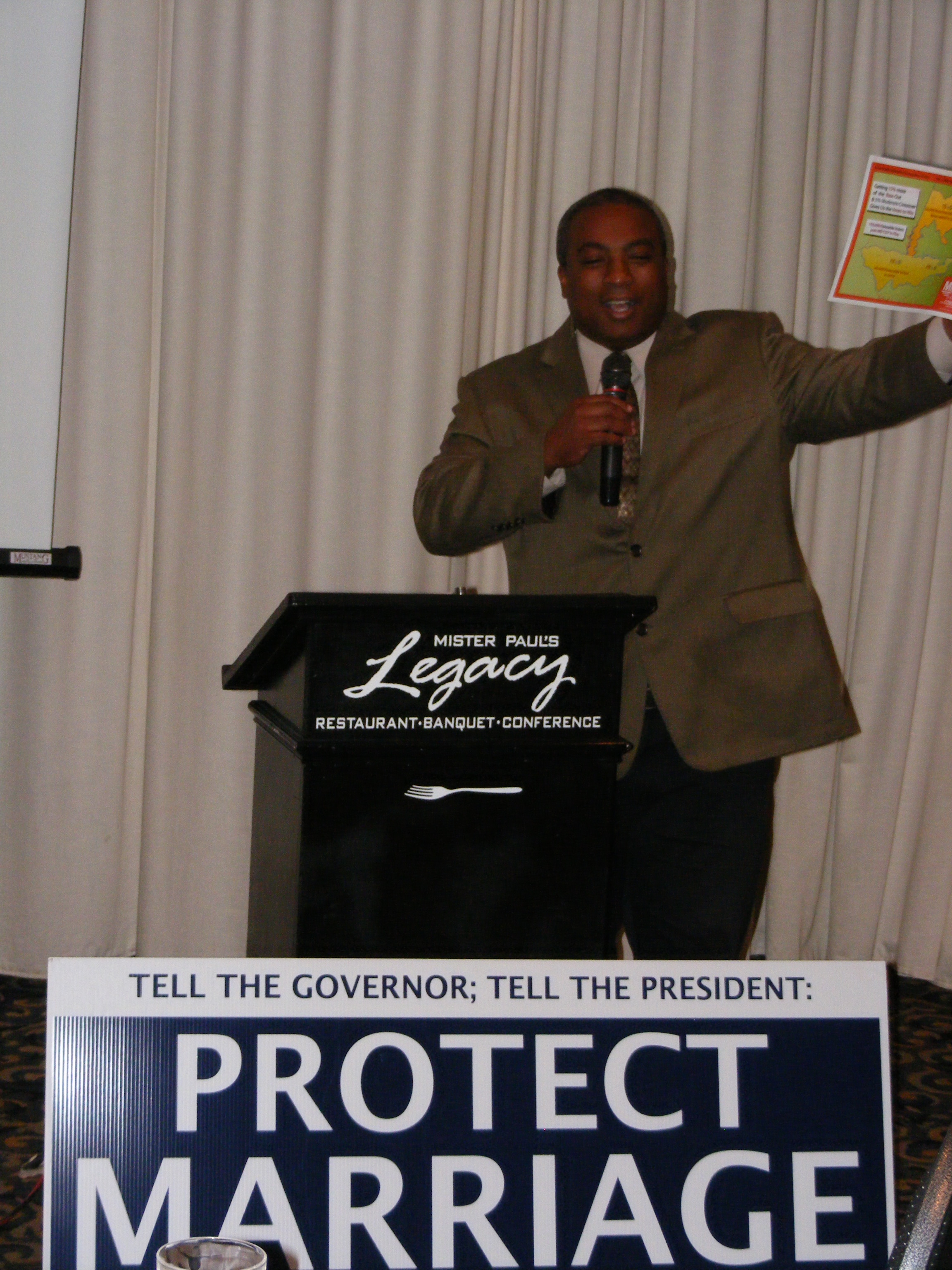 Broadus actually began his presentation by speaking briefly about Question 5, the redistricting issue. He quoted former Baltimore County GOP head Tony Campbell, who commented that “all we have to do is show people the map and it’s a winning argument.”

As for the gay marriage issue and other referendum questions, Broadus emphasized the importance of reaching out to the local minority population. For example, in majority-minority Prince George’s County local leaders there support both Question 4 (in-state tuition for illegal aliens) and Question 6 because they are considered civil rights issues, and oppose Question 5 for the same reason. On the other hand, they are against Question 7 (expanding casino gambling) because they see it as benefiting the so-called “1 percent,” said Broadus.

Gay marriage is on the ballot, not just in Maryland, but three other states: Maine, Minnesota, and Washington, Robert reminded us. “The goal (of proponents) is to change our society,” he added.

Broadus also conceded that some were for Question 6 because they had gay friends or family, but asked whether the relationship with these friends or relatives was more important than their relationship with God. And while secularists “are attacking on all fronts,” Broadus called this “our Roe v. Wade moment” and admonished people not to trust the polls on this issue.

In response to a comment about secular rather than faith-based arguments about Question 6, Broadus believed this was an effort to neutralize gender in society, even though God created man and woman differently. “Marriage is not a right,” concluded the longtime marriage protector. 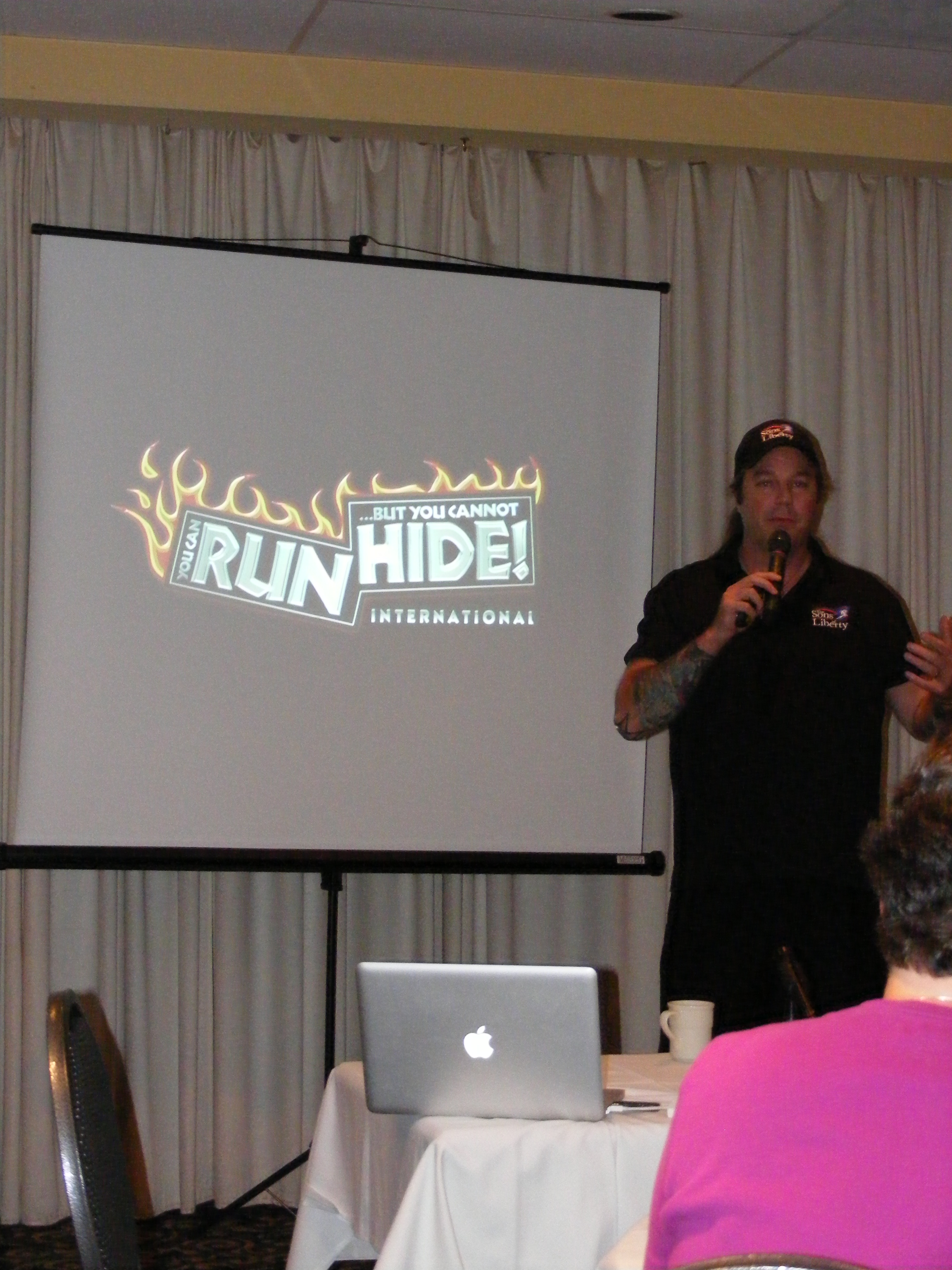 Finally, it was time for our main speakers, the Sons of Liberty. If you can’t read the background slide, here it is below. 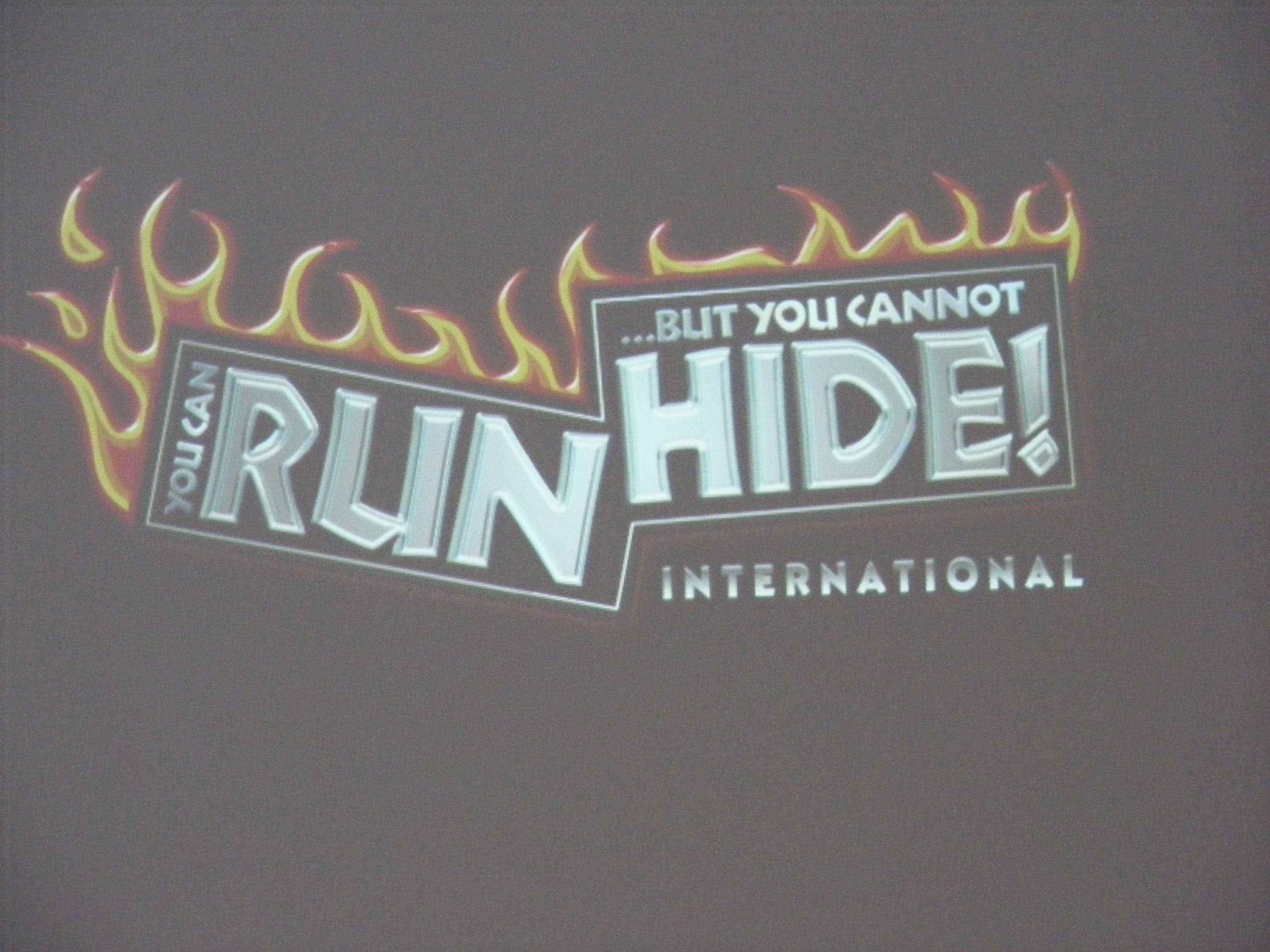 It’s sort of a long name for their ministry, but Bradlee Dean and Jake McMillan have taken their show on the road to hundreds of high schools throughout the country. What we were presented is only about a quarter of what they do in a normal high school stop, said Dean.

In his presentation, Bradlee Dean bemoaned a nation which had seen a “decline since the Supreme Court said no to God” back in 1962. What we are now seeing is “the fruit of a nation which turns its back on God.”

Bradlee continued by saying the Catholic Church is “right on the money” in fighting President Obama and his contraception regulations. He asked, “Why are (leftists) always attacking God? Because they want to be God.” Dean showed a number of different quotes from the earliest leaders of our country acknowledging the divine Providence shown by our Creator, as opposed to the secular humanist attitude of today’s leaders.

That general attitude was due in no small part from our mainstream media. Just read the quote on the wall behind Dean. 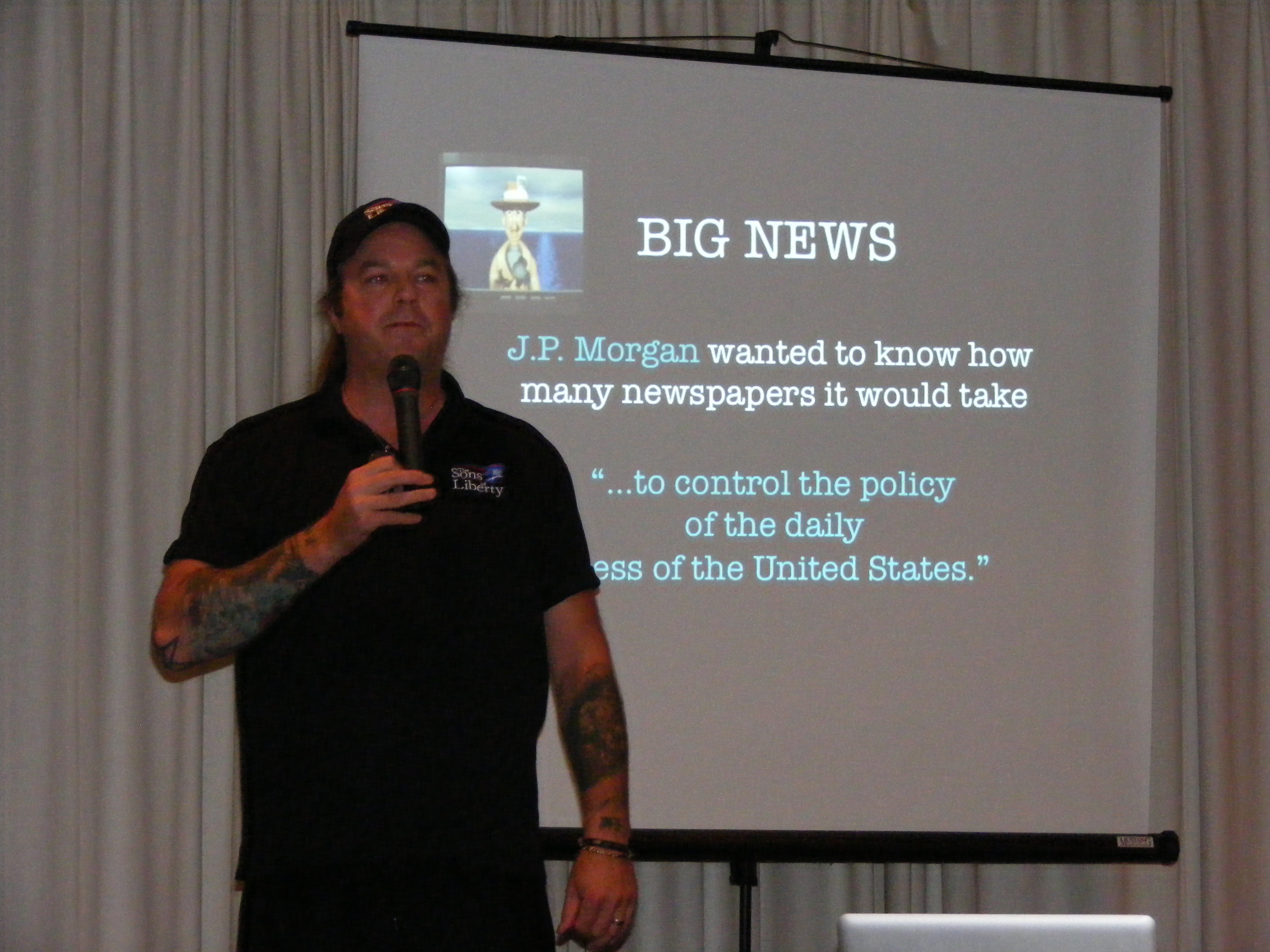 It was determined that controlling 25 newspapers would do the trick, and this was back in 1917! Now we have a cabal of alphabet networks working in conjunction with the largest newspapers to promote a overtly secular agenda. “You’re being lied to. End of story,” said Dean. “The media works for a corrupt administration.” Even Fox News didn’t escape Bradlee’s blunt assessment, since they decide what they want to report to you as well.

At this point Dean stepped aside for a moment, allowing “The Other Guy” Jake McMillan to present a short question-and-answer section admonishing us to think about what we read and say, with a little audience participation.

A sample question: What do they call the raised lettering which enables the deaf to read? Most people would reflexively say “Braille” but if you pay attention you’ll know the true answer is “deaf people can already read, they just can’t hear.” It was part of a broader point that “most of the liberals count on ignorance of the issues,” said Jake.

Returning to the microphone, Bradlee rattled off a number of observations about the media and Hollywood. One slide referred to a warning sign he saw in an AMC theater in Kansas a few years back when the Mel Gibson movie “The Passion of the Christ” was showing. While the sign correctly noted the movie was in Aramaic and Latin, with English subtitles, and had violent content enough to earn an R rating, curiously there were no other warning signs for the other PG-13 and R rated movies in the theater. “It’s not about the money, it’s about the indoctrination,” said Bradlee. “If I entertain you, I’m controlling you.”

Dean then turned to a distinction not often found in the media, which commonly refers to our nation as a “democracy.” (As have presidents since Ronald Reagan, Bradlee noted wistfully.) Our nation is a republic, continued Bradlee, ruled by law and principle rather than by what the public desires. Dean quoted several early Americans who pointed out that democracies expire from within to become tyrannies. And having visited hundreds of public schools, Dean observed that they commonly are surrounded by fences, covered by security cameras, and patrolled by armed law enforcement officers. “They’re getting kids ready for a police state” in public schools, he warned.

Continuing on to a subject near and dear to several there, Bradlee went on to describe the fight about gay marriage as one “about upending your Constitution.” It’s being used as a “political battering ram” to take us further away from our roots as a nation. “You’re dealing with totalitarianism,” Dean believed.

But it wasn’t all bad news. Bradlee wanted to stress as well his thoughts on those who have perished in defending those rights endowed by our Creator, the over 400,000 who died and the millions who live on while missing their friends and family lost in battle. “Who’s going to stand up for the veterans?” he asked.

Overall, the message was simple yet elegant: “If you don’t know your rights, you don’t have any rights.”

Afterward, Bradlee and Jake stuck around for over a half-hour to answer questions, sell their various wares, including CDs, DVDs, and books, and pose for pictures like the one below. 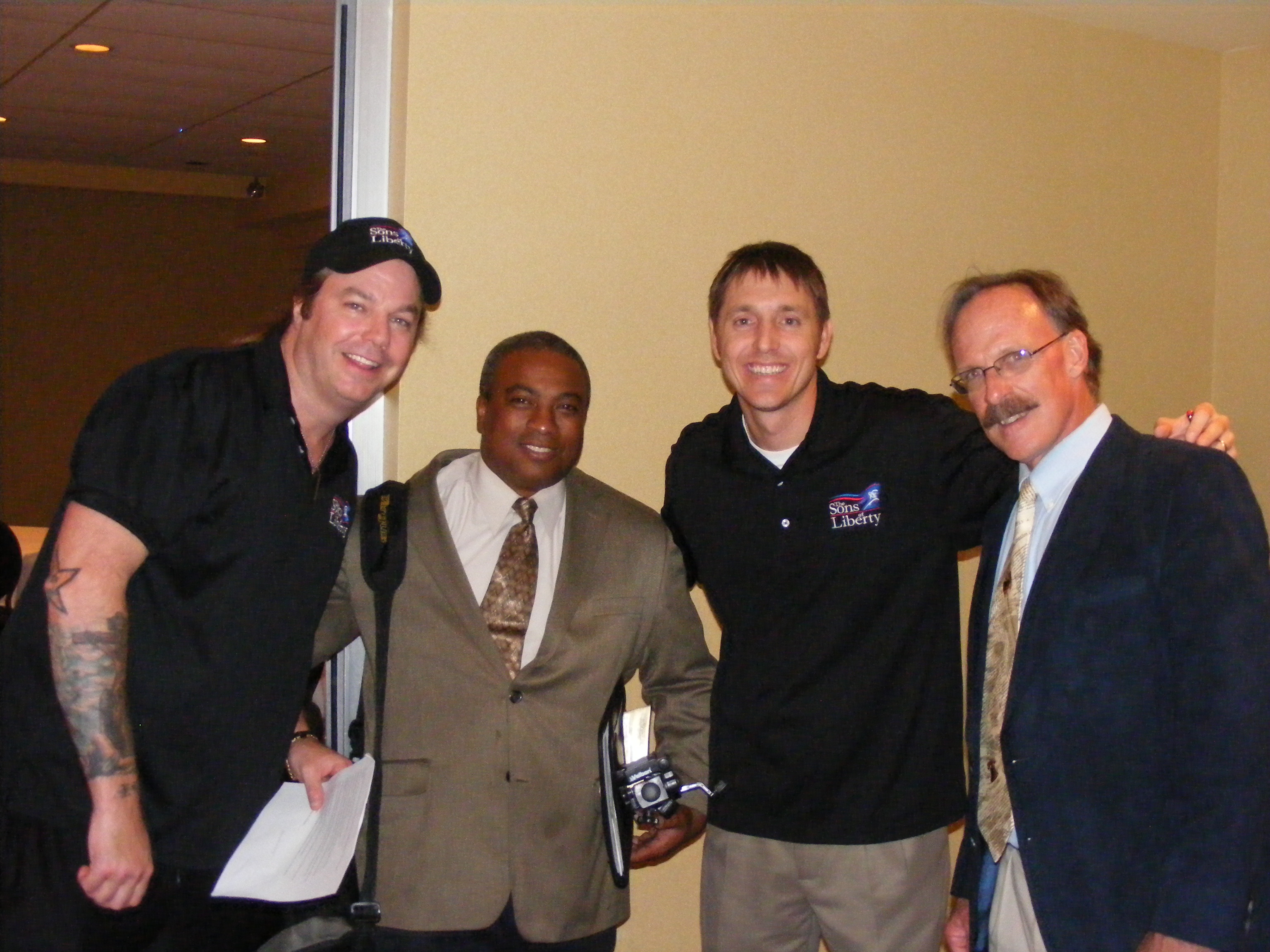 From left to right you have Bradlee Dean of Sons of Liberty, Robert Broadus of Protect Marriage Maryland, Jake McMillan of Sons of Liberty, and Dr. Greg Belcher of the Wicomico Maryland Society of Patriots. It’s also worth mentioning that a number of Republican Central Committee members were in attendance, along with the head of the Worcester County TEA Party and MSOP head Sam Hale.

And while there was no media there besides this reporter and Julie Brewington, who’s mostly pulled away from her Right Coast Conservative blog (but was videotaping the proceedings nonetheless), we did have two write-in candidates for office. 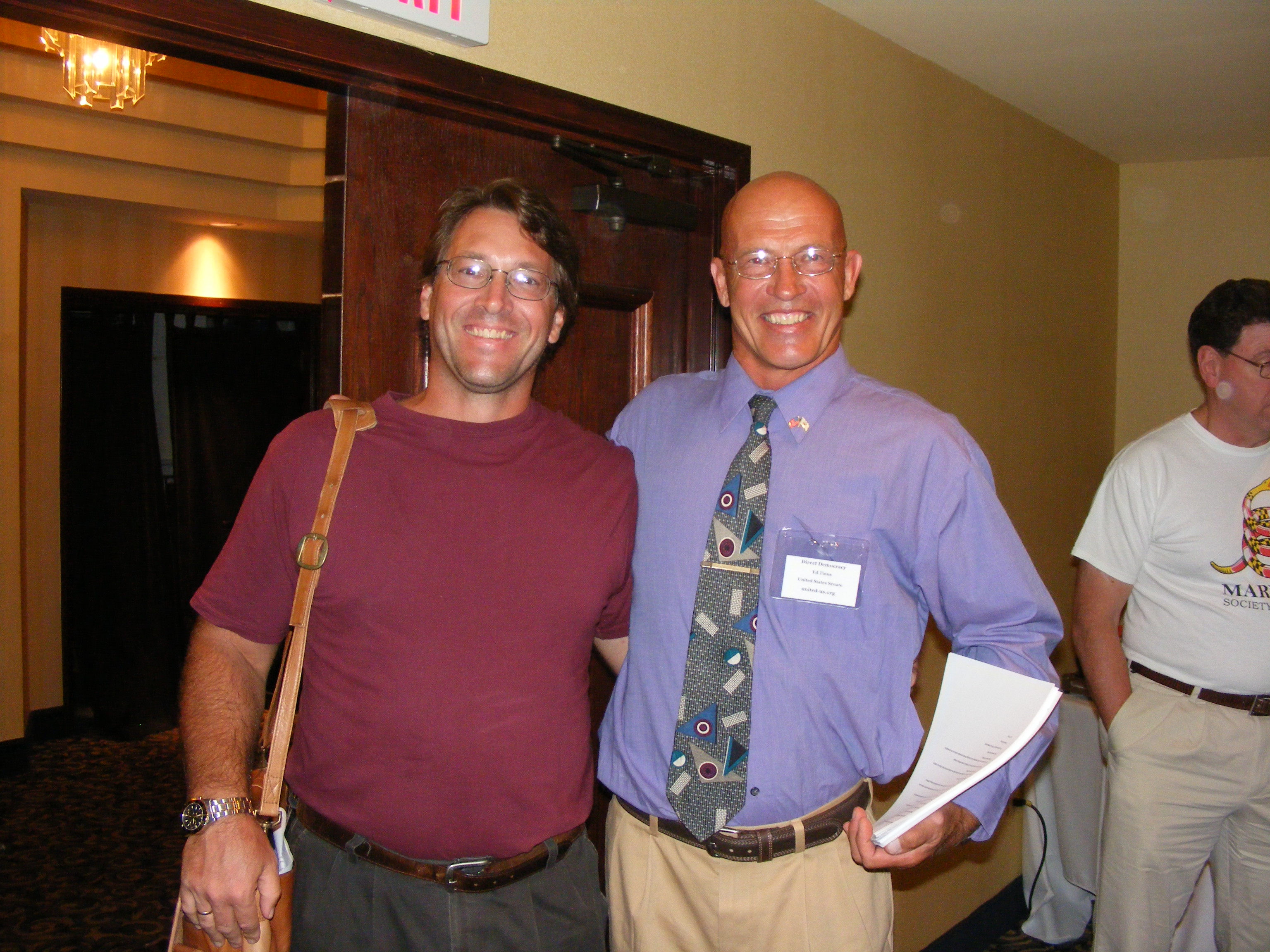 On the left is Mike Calpino, who’s running in the First District Congressional race as the write-in not endorsed by either political party, and on the right is Worcester County resident Ed Tinus, who is resurrecting his U.S. Senate campaign after finishing last out of nine Democratic candidates in their primary with 1,064 votes, or 0.3%.

To be quite honest, I wasn’t sure what to expect from this meeting because I’d not heard of the Sons of Liberty or Bradlee Dean’s Christian rap-rock band Junkyard Prophet before last week when I first promoted this meeting. In doing a little research on the group, the prevailing opinion on them was that they were typical bigoted Christian haters – yet I found nothing overly controversial about their viewpoints. I will grant they did not speak much specifically about gay marriage or Question 6, but their opinions on the subject are likely shared by millions in this state and across the nation. Having seen the trend of a nation falling away from a Christian God, they obviously fret that allowing same-sex marriage may open the door to an even further slouch towards Gomorrah, to borrow a term made famous by Robert Bork. I think it’s a legitimate concern, others may disagree.

And if the idea of public school is to teach children critical thinking then I can’t understand what the big deal is to have them come to a school for a few hours and speak to the kids there. But the impression I get is that Sons of Liberty faces a lot of static in putting together these presentations simply because they don’t have a politically correct viewpoint, even if the opinions they present are based in historical fact.

The duo is in the midst of a four-day swing through Maryland and northern Virginia, with future stops in several other states. Dean admitted it was hard on him to be away from his five children, but the fight to preserve his country and its God-given freedoms was worth it. Having heard the presentation, I tend to agree.