Once again, my occasional look at those items I find are worth a paragraph but maybe not a full post.

I’m going to start with some reaction to the recent comments by Maryland Democratic Party Chair Yvette Lewis regarding the ongoing redistricting petition. This comes from Radamese Cabrera of the Fannie Lou Hamer PAC, a group which opposed the current gerrymandering because they felt minorities were underrepresented.

While he discusses the lack of logic in splitting large counties and Baltimore City into multiple Congressional districts, I think the most interesting allegations come here:

The Fannie Lou Hamer PAC firmly believes that the majority Black jurisdictions of Baltimore City and Prince George’s County and the majority-minority county of Montgomery were drawn to protect and elect White Male Democratic representatives.  I believe that Congessman Steny Hoyer, Congressman Dutch Ruppersburger and Congressman John Sarbanes are afraid to represent a White voting majority Congressional District.  These individuals could only win in a White plurality districts.

In plain simple language, this means they need a District with a Black population with at least 25%.  It will be interesting to see if John Delaney (D) can beat Roscoe Bartlett (R) in the 6th Congressional District when the this District is very conservative and has a large White plurality vote.

To quote Governor Howard Dean in the 2004 Presidential Campaign, “Why are White Democrats afraid to campaign and win elections in jurisdictions that are 90% + White?”  Ms. Lewis, the question that needs to be raised in 2012 is; Why are White Democratic elected officials at the Federal, State, and County levels afraid of campaigning in majority White Districts?

The question not asked here is the more obvious one: why do minorities consistently vote for Democrats? If you look at economic results since the days of the Great Society one would have to conclude through a preponderance of the evidence that monolithically voting for the Democrats has provided a disservice to the black community. Voting 75-25 in favor of Democrats instead of 90-10 or 95-5 might just get someone at 33 West Street to really pay attention to your needs. After all, white people split their votes so both sides try to earn our trust.

The next item I wanted to talk about probably has no hope in hell of succeeding in Maryland, at least until 2014. But Bob Williams of State Budget Solutions has written a piece on how to deal with government employee unions. It’s timely in the wake of Wisconsin’s success.

Besides unions in states which aren’t ‘right-to-work’ states (Maryland is not one) I can’t think of any other entity where money is taken from a person involuntarily and used for a political purpose the worker may not approve of. If some state official went around and told employees they had to donate to his or her re-election fund or be fired, the official would be run out of town on a rail once that was found out. But unions do this and no one bats an eye – of course, when that power is taken away (and Williams provides examples of this) Big Labor finds itself in big financial trouble.

Unfortunately, Maryland finds itself going in the other direction – for example, child care workers are now forced to either join the union or pay a “service fee” to them. And guess where they go? To the union’s “Committee on Political Education” (read: contributions to toady Democrats.)

Speaking of unions, I wanted to follow up on something I wrote on Examiner about three weeks ago. I noticed a few days later the picketers had gone across the street to picket Walmart, at least for one day. (I suspect Wendy’s may have taken exception to the group of three people drawing attention to their restaurant.) But a friend I spoke with who works at Walmart contended the picket wasn’t about the Salisbury store but rather one being built in Denton, Maryland – presumably by non-union labor. Regardless, I don’t think it’s going to hurt Walmart’s business and people are going to be happy to finally have them in Caroline County rather than drive to Easton, Seaford, or Dover. 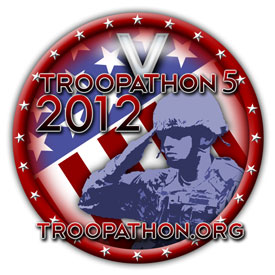 And now about the image you see on the left. I’ve spoken about this event a few times in the past, and while we seem to be winding down in our foreign military involvement it’s a sure bet that we won’t be retreating to Fortress America anytime soon.

So this year Move America Forward selected Thursday, July 12 as its date. It seems like this is a little later on the calendar than it has been in the past, so maybe they’re looking to take advantage of the patriotic fervor that comes in the wake of Independence Day. (Or, more likely, it works better with the calendar of proposed guests and hosts – a list which will surely be announced on the Troopathon website once it’s restarted over the next few weeks.)

For Troopathon 2012, we’re taking the gloves off and giving Troopathon a much more raw, gritty theme than you have seen in the past. No more fancy stuff, just raw in-your-face and fervent support for our troops in Afghanistan! (Emphasis in original.)

Perhaps that’s a necessary change because, after raising $1.3 million in the first rendition back in 2008, their results have petered out to around $500,000 last year – a nice total, but short of their $700,000 goal. And while that may not matter so much simply because there are far fewer soldiers afield than there were in 2008, the lack of support also sends a subliminal message to both our troops and our jihadist enemies.

The final note will be a programming note: as I let my monoblogue Facebook fans know on Friday, I will have an interview with U.S. Senate hopeful Dan Bongino up at 8:00 tonight. If you want some of the inside scoop on this site, become a Facebook fan of mine!