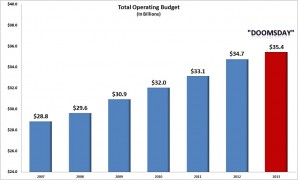 As I wrote Sunday, the Maryland General Assembly holds a Special Session beginning next Monday to address what Martin O’Malley and majority Democrats consider a revenue shortfall in the FY2013 budget. Despite the fact a budget was passed during the regular session, the $700 million increase wasn’t to the liking of educators, unions, and others who were expecting another $500 million or so in the budget to address their wish list.

While Republicans won’t have the votes needed to stop any tax proposal put forth by O’Malley and his Democratic allies, they can use the occasion as a cudgel to spread their message of fiscal responsibility. On Monday evening a planned rally will give voice to the opposition message that increasing taxes is the wrong solution to a budgetary problem that doesn’t even exist.