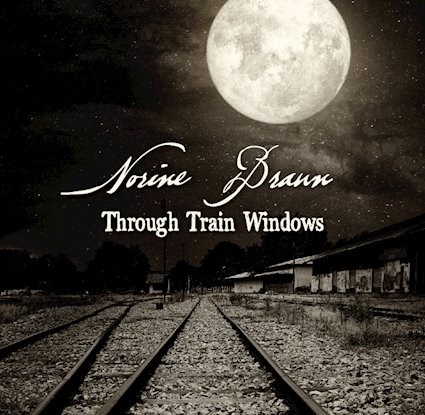 An album that is hot off the press – released yesterday, as a matter of fact – Norine Braun brings an interesting backstory to her music with her latest effort.

Commissioned as an “artist on board” for a cross-Canada tour, Norine and her partner (who sings harmony on a pair of songs, including the most upbeat I’m Going Home, and also plays the keyboards on a number of tracks) used the occasion to write and compose eleven songs that generally play on a theme of traveling.

Another trend that seems to run through the record is one where Braun seems to emphasize one instrument in her songs; acoustic guitar on the opening song Sleeping Buffalo, its electric cousin on Jerkwater Town (to me, the best song on the album with a bluesy Pretenders vibe thanks to Braun’s vocals) and I’m Moving On, and so forth with tenor sax (one example being the plodding Climbing Table Mountain) and keyboards (such as in the non-anthemic O Canada or ballad Crosses & Sweetgrass) taking their turns as well. A number of songs get a little bit of blues harp as well, provided by Huggybear Leonard. (I just liked writing Huggybear, but seriously he adds a lot to those songs if you like a blues sound.)

But what sets the better songs apart, such as Jerkwater Town or Exhale (with its haunting coda), is the integration of more sounds and complexity. Now, this doesn’t always work – I wasn’t keen on the call-and-response in Climbing Table Mountain, the spoken word rap in Rock The Rolling, or the vocal stylings on the title track, for example – but that little splash of included tremolo makes Heading Up North a better song. You also get the culture-crossing Rue St. Jean as an interesting tidbit.

Maybe the only real misfire in the group is Heaven Only Knows – not a bad song, but vocally perhaps too much of a challenge for Braun.

Since I brought it up at the top, there is more to the backstory. Not only was Braun the Artist on Board for her cross-country journey, but she is also Musician in Residence at the Banff Centre in Alberta. And, thanks to the generosity of “Creative BC and the Province of British Columbia” you have the opportunity to secure this slice of Canadiana. To be sure, it’s a very artistic and eclectic collection and it may be one that gets plenty of airplay on adult contemporary and alternative stations north of the border thanks to their content laws. Whether it gets plenty of airplay or not in your home is, as always, up to you to judge: I’m going to encourage you to listen for yourself.