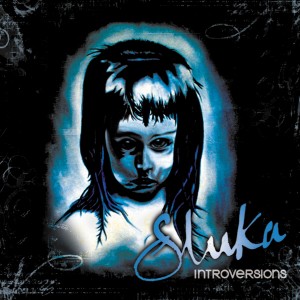 From San Diego by way of a global upbringing, musician Christopher Sluka (who simply uses his last name professionally) shows off his talent as a musician and songwriter on this DIY effort. The album came out in January, but there’s a renewed interest in the music as Sluka is trying to put together videos for all thirteen tracks as a BluRay release prior to a European club tour beginning next month.

If you look at the collection as a whole, you can tell that Sluka appears most comfortable writing and performing keyboard-based compositions, although he’s also credited with handling guitar, bass, violin, and drums for the record. Most of the songs (with the exception of the almost Beatlesque Hung and sweet ballad Fear of Ordinary Life) seem to have that basis. Because of this, the challenge for Sluka is to keep the songs from having a bland sameness – he succeeds best in the bookend songs Valentine Lies and Gothic Cavalier; on the other hand, Beautiful seems almost a slightly faster version of the preceding song Even The Knights Love Caesar.

Yet even when he goes off the beaten path, it can appear trite – such as in the song A San Diego Zoo, which is mildly humorous lyrically but overall is a miss. Doctor Strangelove, too, is a good song but doesn’t need the “live” intro. Sluka recovers well with the beat-heavy Sunday’s Child, and its follow-up Paralyzed, which begins as more of an acoustic ballad before becoming an interesting song that could work in the adult contemporary realm. I would tend to place Sadder Than Sad in that category as well.

To me the songs which best portray Sluka (besides the opening track of Valentine Lies) are buried toward the back of the album. Higher is an enjoyable, upbeat song that allows for harmony with a female backup singer while Severed has a great melody and has a nice layered sound to it, particularly in the vocals.

As a whole, I was a bit disappointed in the direction “Introversions” took after its opening track, the video for which follows:

But as always (when I can, of course) I encourage people to listen for themselves. You may be more pleased with the final product than I was.