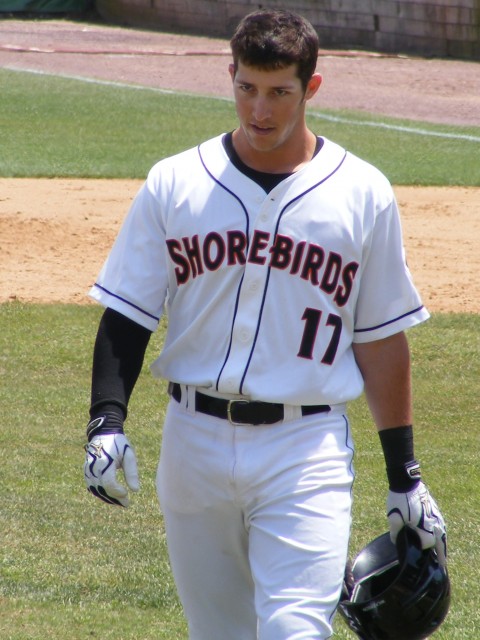 The last of the triumvirate of Shorebird SAL All-Stars to be a Shorebird of the Week, it’s not that I planned on waiting to include Steve Wilkerson, but he was sidelined by an injury the last couple weeks and one of my “rules” is that a player needs to be on the active roster.

But since coming off the disabled list after a 2 1/2 week stay, Steve is 2-for-5, increasing an already stellar average to .313 (although earlier in May he was up to a .323 mark.) It’s been a complete turnaround from his initial pro season, where Wilkerson stumbled to a .190/2/15/.519 OPS slash line with Aberdeen last year.

However, the Georgia native by way of Clemson University seems to have figured things out over the winter as he’s brought his OPS up from that anemic .519 mark to a solid .820, well above average. (An “average” OPS, which is the sum of on-base percentage and slugging percentage, is around .700 or so.) Bumping the batting average up over 100 points is a good way to help that statistic out, but he’s also drawn 21 walks in just 33 games, compared to 14 last season in 60 contests. That increase in on-base percentage is powering his game and has led him to be selected as an SAL All-Star.

Wilkerson, who turned 23 in January, is another Shorebird player who spurned a draft offer out of high school, turning down the Red Sox to go to Clemson as a 15th round pick in 2010. Four years later, he came out as an 8th round selection of the Orioles, so there are some pretty big expectations from Steve. It also may explain why he got another chance despite a subpar initial season where a lower-round pick may not have.

Unlike a number of other infielders in the Orioles system, Wilkerson has primarily played second base during his tenure, occasionally filling in at shortstop. His fielding has also improved over last season, making him a prime candidate for promotion before the end of the year. Having played only 33 games, though, the powers that be may decide he needs to string together several weeks of action before the decision is made.

If Steve keeps his average around the .300 mark, though, his performance will make the choice to promote quite easy.