On May 20, 2015 I received an email from the American Freedom Defense Initiative announcing that they are buying ads on Washington, D.C. buses and train dioramas.

Because the media and the cultural and political elites continue to self-enforce the Sharia without the consent of the American people by refusing to show any depictions of Muhammad or showing what it was in Texas that had jihadists opening fire, we are running an ad featuring the winning cartoon by former Muslim Bosch Fawstin from our Muhammad Art Exhibit and Cartoon Contest in Garland, Texas.

The attack on the event drew a lot of criticism aimed not at the jihadists, but at Pamela Geller and AFDI for hosting such a “provocative” contest. In this convoluted way of thinking, the jihadists could not be held responsible for their attack because they were provoked into it!

Here is the ad so that you can see for yourself what the fuss is about. 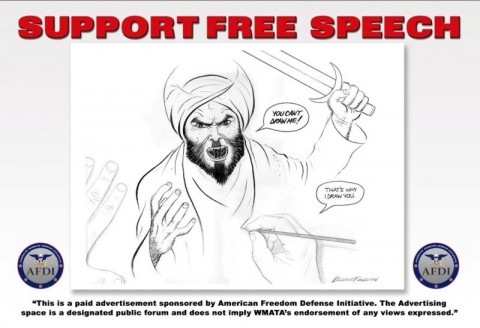 While this controversy is important in its own right, the following quote from Pamela Geller made me think of another first amendment issue that we are facing:

Putting up with being offended is essential in a pluralistic society in which people differ on basic truths. If a group will not bear being offended without resorting to violence, that group will rule unopposed while everyone else lives in fear, while other groups curtail their activities to appease the violent group. This results in the violent group being able to tyrannize the others.

The progressives have been very eager to push gay marriage on the American people. The Supreme Court ruling that many expect to legalize gay marriage in every state should come down this summer. If or when that happens, do not think that this is over. The gay marriage fight is really not about gay marriage at all: it is about destroying marriage and the family unit and replacing it with the government.

If it were only about being able to be with the partner of their choosing, then why do we have the vindictive attacks on Christian photographers, bakers, and florists that decline to participate in gay marriage ceremonies? Why is this issue being pushed so hard?

The gay mafia has not resorted to chopping off heads, but it has put many Christian business people through a hellish experience resulting in fines and losing their business because they did not want to participate in gay marriage ceremonies.

As a reminder, the First Amendment says:

Congress shall make no law respecting an establishment of religion, or prohibiting the free exercise thereof; or abridging the freedom of speech, or of the press; or the right of the people peaceably to assemble, and to petition the Government for a redress of grievances.

This is true whether the speech is politically correct or not.

Americans are facing tough choices on First Amendment topics. If we do not resist the onslaught to demonize any open discussion of what Sharia requires of Muslims and how that is not compatible with the Constitution, then we will soon be silenced on any topic when threatened. For example, besides saying that you cannot draw Mohammad, Sharia law says that women are not equal to men. It allows men to have four wives. It also says that if you convert from Islam, you are to be killed. Now how can that be reconciled with our Constitution?

Yes, we can draw pictures of Mohammad in the USA and we have an obligation to do so to show that we will not back down on our First Amendment rights.

Christians have the obligation to state the Biblical position on marriage. Marriage is only between one man and one woman. If the Supreme Court declares marriage to be something else, then the religious freedom that we have known will be gone because rather than choosing another baker, photographer, or florist, the gay mafia will seek to destroy and intimidate anyone that does not fall into line and state that gay marriage is as good or better than heterosexual marriage.

Mohler points out: Human rights and human dignity are temporary abstractions if they are severed from their reality as gifts of the Creator. The eclipse of Christian truth will lead inevitably to a tragic loss of human dignity. If we lose religious liberty, all other liberties will be lost, one by one.

So draw a cartoon and support marriage between one man and one woman or soon you may find that you can do neither. If everybody draws a cartoon and all Christians stand up for marriage, then it will be much harder for the jihadists to kill all of us or for the gay mafia to destroy every business that doesn’t agree with them, but if we are cowed by the threat of violence, then the First Amendment may still be in the Constitution – but it will not be relevant.

3 thoughts on “Sharia, gay marriage, and the First Amendment”