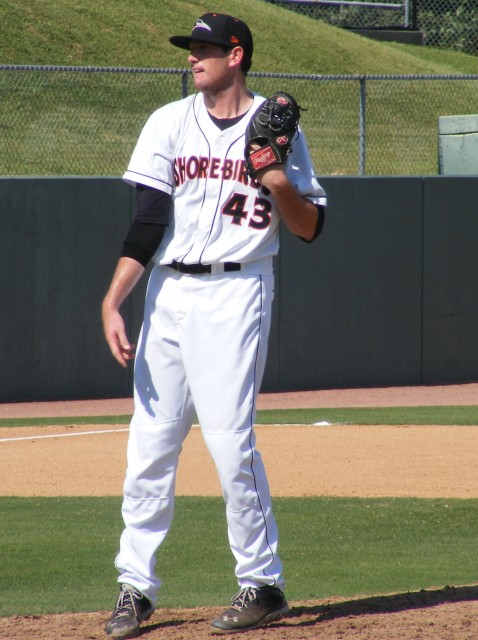 I begin this year with a “local boy makes good” story.

One tendency the Orioles have is their willingness to give hometown or regional talent a chance, even if they don’t draft the player. A good example of this is former Shorebird Glynn Davis, who has advanced over the succeeding years to Bowie and is considered one of the Orioles’ better outfield prospects.

Yet Nik Nowottnick is an even more local story to us, as he attended Colonel Richardson High School in Caroline County. Moving on to Towson University, Nik pitched well enough there to get Baltimore’s attention and signed on in late July of 2013 – just in time to get some innings in at the Gulf Coast League in August of that season.

Last year the 23-year-old righthander moved up to Aberdeen to start the campaign, going 2-2 with a 3.30 ERA and 1.4 WHIP in 30 innings. While a 18-to-14 strikeout to walk ratio wasn’t the most desirable one, Nik only allowed three walks in his last five Aberdeen appearances covering 13 2/3 innings while striking out seven. That stretch merited a mid-August promotion to Delmarva, where Nowottnick allowed just three earned runs in seven appearances covering eight innings, and was not scored upon in his last five outings. Here he struck out six and walked four for a 1.38 WHIP.

So the key for Nik this season will be to improve on his walk ratio a little bit – 18 free passes in 38 overall innings last year is a little bit high. As he did at Tuesday’s exhibition, it’s likely we’ll see Nik as a late-inning guy but not necessarily the closer.

One note: as I took the photo in last season’s Labor Day finale, this year Nowottnick will be wearing #31. Nik is one of a handful of carryover players from last season, mostly from the pitching ranks. In all, the “break camp” roster included 12 players who spent at least a few days with Delmarva last season, with most joining the team in the second half.