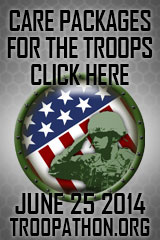 As I have done for the last several years, I’m supporting Troopathon 7, which is a continuing effort by the group Move America Forward to send care packages to our troops on the front lines in the Long War. Even if you don’t necessarily support the mission and would prefer the troops come home, while they are still there we should do what we can to make their lives a little more comfortable.

The format is the same as previous events – on June 25 there will be an 8-hour internet telecast from the Ronald Reagan Presidential Library featuring longtime hostess Melanie Morgan and many other conservative heavyweights in the media world. Generally they update their site regularly on the status of special guests.

You may recall that in past years I have been a member of a team of bloggers called the Hot Air Steamers – it was a solid lineup which garnered the second-highest amount of contributions in 2012. The folks at MAF have decided to retire that competition, though, and now every blogger works on his or her own to qualify for prizes in specific tiers, with the overall leader receiving an AR-15. Now you all could surprise me, but I’m not going to hold my breath that I can get to that level – just making it to the first tier would be a nice achievement. (It would take about 20 or 21 donors from this site to do so.)

So on the right-hand sidebar, just down from the political ads, you will see a icon similar to the one on the upper left of this post. If you click it you’ll go to a page where you can fill out an order form and anything purchased there is credited to my account. Once I verify all is in order (they’re West Coast-based so I’ll find out this afternoon) I’ll start the ball rolling myself, although if you want to go first by all means do so. It matters less that it accrues to me than it does assisting them.

It’s a cause I believe in and every little bit helps. And don’t forget you can watch the Troopathon online June 25 – as I recall it runs from 4 p.m. to midnight EDT. Their goal is a modest $300,000 this year so let’s see if we can help them get there.