This was originally written as a two-part series for Watchdog Wire, with a few minor changes made there to “neutralize” the content slightly. I’ve left the original page break in as a “more” tag.

Unlike Texas, Maryland doesn’t have its equivalent to Wendy Davis, the legislator now famous for talking down a measure to prohibit most abortions after 20 weeks – mainly because our state doesn’t need one. Over the last two decades, those who support murdering children in the womb have pressed ahead into making Maryland one of the leading states for abortions. In most cases, the Republicans in the General Assembly stand for the unborn while the Democrats pander to the abortionists. But there are exceptions, and it’s for that reason I started looking into what I’m about to post here.

My involvement began when I asked about a notice from the newly-created Maryland Pro-Life Alliance (MPLA), which is backing a Maryland counterpart to the Texas law recently passed called the Pain-Capable Unborn Child Protection Act, or PCUCPA. (I say newly created as MPLA joined Facebook June 25, which is also the date of their first website blog entry. It was literally produced in the immediate wake of the Wendy Davis filibuster sideshow.) The MPLA note blasted State Senator E.J. Pipkin, who is one of the few Republicans with a spotty pro-life record, according to data tabulated over the last several years by Maryland Right To Life. (Worth noting: Maryland Right To Life is not affiliated with the Maryland Pro-Life Alliance.)

Indeed, in following the Pipkin voting record, he has often stood alone among Republicans in opposing more abortion restrictions in the Maryland Senate. (A few House Republicans, most notably Delegate Robert Costa, also have sided with the vast majority of Democrats when it comes to snuffing out the unborn or supporting embryonic stem-cell research.)

Here’s what MPLA had to say about Pipkin’s record:

I think you can guess how E.J. Pipkin comes down on these votes.

He had a choice.

But E.J. Pipkin didn’t do that.

He stood up on the Senate floor and voted to give your tax dollars to abortionists throughout the state of Maryland to kill the unborn.

Now Pipkin has always had a voting record that’s been a little bit unusual for a Republican; however, this is where he supposedly stood on the issue during his 2004 Senate race.

At this point, the e-mail decrying Pipkin’s record is all the MPLA has to show for its efforts against the Senator. But as you’ll see in part 2, it wasn’t the last move made by the nascent group. They have upped the ante with two Harford County delegates, Wayne Norman and Donna Stifler, in a robocall regarding a 2013 version of the bill introduced in Maryland – a phone message which one claims broke federal election law.

That and other reaction will come after the page break.

Above the fold I told you about the newly-formed Maryland Pro-Life Alliance, which is backing a Texas-style ban on abortions after 20 weeks called the Pain-Capable Unborn Child Protection Act, or PCUCPA and had called out State Senator E.J. Pipkin about his overall record on abortion, citing data compiled by the unrelated but similar Maryland Right to Life.

Those two Delegates were the subject of MPLA-sponsored robocalls this week, calls which were condemned by the Delegates in a House Republican Caucus press release, shown below. 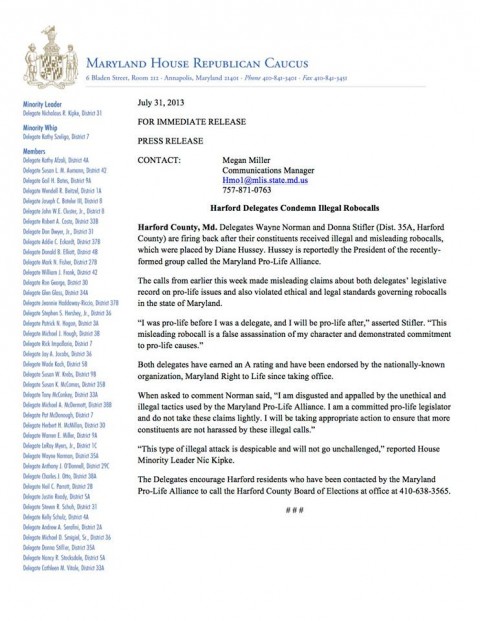 The letter alleges MPLA violated federal statutes in its robocall, and points out both Norman and Stifler have exemplary pro-life voting records – and according to the Maryland Right to Life compilation, they indeed toe the pro-life line.

Moreover, in a Facebook posting alerting his constituents to the letter, Delegate Norman also cited the Telephone Consumer Protection Act 47 U.S.C. § 227 as the law being violated by the robocalls; Meanwhile, both Delegates were also kind enough to forward me a copy of Maryland Right to Life’s defense against MPLA’s accusations.

I heard of the recent robocalls attacking each of you for not sponsoring the MDRTL-initiated HB1312 last session. As you are surely aware, the group behind the robocalls appears to be a new fringe group operating in Harford County. Their views are certainly disputed by MDRTL.

Thank you for both of your longstanding pro-life support in the MD House of Delegates. We at MDRTL and your constituents are certainly grateful for your courage to stand for justice.

I submitted a quote in your defense on behalf of MDRTL to Minority Whip Szeliga, illustrating your strong pro-life stands in the legislature: “Rumors and inaccurate information on the pro-life positions of several legislators have been circulated recently. Maryland Right to Life (MDRTL) is the largest pro-life group in Maryland, staffs an office in Annapolis and has a full time Legislative Director. MDRTL is the only single-issue pro-life lobby in Annapolis.

Based on Maryland Right to Life’s voting records in the legislature, Delegates Wayne Norman (R-35A) and Donna Stifler (R-35A) have always cast solid pro-life votes,” noted Jeffrey D. Meister, Director of Administration and Legislation for Maryland Right to Life. If MDRTL can be of any assistance or work with you in any way in the upcoming session, please don’t hesitate to contact me! 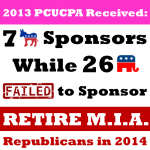 Yet MPLA doesn’t even stop there, criticizing a group of 26 Republicans who didn’t sponsor this year’s versions of PCUCPA (HB1312/SB456); meanwhile, they point out seven Democrats co-sponsored in the House. These bills received March hearings but no further action.

I contacted MPLA president Diane Hussey about these and other issues. She provided me with the robocall in question, which is rather lengthy and advises listeners to press 1 to leave a message for the Delegates.

Hussey also added her side of the story:

We have no affiliation at all with Maryland Right To Life. We are proud to be independent of any connections with the political class in Annapolis. Maryland Pro-Life Alliance is the no-compromise pro-life group in Maryland.

I have attached the robocall (see above). Feel free to share it with your audience. We contacted lots of constituents of Delegate Norman in this district, and we hope that he got the message – Being Pro-Life means standing up and fighting to save babies. That means sponsoring bills and leading from the front, not following.

And being a Pro-Life Leader means that you don’t threaten the grassroots with lawsuits when they speak the truth to your constituents. Why won’t Norman just commit to sponsoring or co-sponsoring the Pain Capable Unborn Child Protection Act next legislative session?

We are prepared to communicate often and in all available media in order to pass the Pain-Capable Unborn Child Protection Act in Maryland, and to stop all taxpayer funding of abortions. This means phone calls, emails, billboards, mail campaigns, internet advertisement, and television advertisements are on the table.

But the more radical, “in your face” stance of the MPLA – as opposed to the more quiet advocacy of other pro-life groups like Maryland Right to Life, which as noted above provides an annual “scorecard” of pro-life voting records showing most of the 26 Republicans noted by MPLA are reliable pro-life votes – seems to be a direct offshoot of MPLA president Diane Hussey’s involvement with the Campaign for Liberty in Maryland. That group regularly uses what are sometimes referred to as “Alinsky tactics” by other conservative groups as a confrontational method of trying to make their points. In this case, they’re trying to shame recalcitrant Republicans into action. Witness another meme posted by a Campaign for Liberty supporter, to the right of the page.

The obvious question, though, is where efforts should go. Certainly it would be great to have a united Republican Party flying the pro-life banner, and with a few exceptions we seem to have that. But as I noted above, the reason Maryland doesn’t need a Wendy Davis is that they already have plenty. If you’re going to get in someone’s face, go on down to Montgomery and Prince George’s counties and into Baltimore City and change the hearts and minds there. Take action behind the enemy lines, if you will – in particular, ask the church-going minority community why they automatically give their votes to those who support aborting the unborn. While seven Democrats were sponsors of the PCUCPA, not one of them hailed from those areas.

Instead of working against Republicans who are solid pro-life votes but may not have sponsored the 2013 PCUCPA because of time constraints or perhaps not being on the committee in question, why not work on the Democrats who are solidly against the pro-life movement, not to mention advocating for increasing taxes, writing more regulations, and usurping the primacy of local government for local concerns?

Update from Watchdog Wire version: Last night MPLA increased the stakes again, chastising Republicans who voted for the state budget this year and claiming it funds over 3,000 abortions.  They also explain a piece of their philosophy:

We need to have Republicans 100% supportive of the unborn before we can move on to holding conservative Democrats accountable to pro-life positions.

Our objective is to create a 100% pro-life Maryland, accepting anything less is a disservice to thousands and thousands of unborn children every year.

The Maryland pro-life movement will never make any progress by settling for things that we don’t want year after year.

In this case – although not necessarily for all the same reasons – I also believe the budget which was passed should have done so without a Republican vote.

2 thoughts on “The stricter pro-life line: so who is more pro-life?”