The question mark above is solely based on the fact his election is by no means certain, but I received word last night that Republican gubernatorial candidate Blaine Young will be in Dorchester County tonight (Thursday, January 3) for a dessert and drinks reception at the Hyatt Regency resort in Cambridge. As he did in Ocean City over the summer, Blaine is holding this in conjunction with the Maryland Association of Counties winter meeting there.

Since I’ve already met Blaine on a couple of occasions, I won’t be attending this particular gathering – although I would encourage Republicans local to Cambridge and nearby Talbot County to take the opportunity. I’ve found Blaine to be approachable and friendly, his events tend to be well-run, and if you leave in want of food and drink it’s your own fault. While this is a meet-and-greet event, I doubt he’d refuse a contribution check if you’re inclined to give one.

One other observation I have about the soiree is that Young is shrewdly leveraging his appropriate attendance at MACo, since he’s the head of the Frederick County Commissioners. (The same would be true for fellow candidate David Craig as he’s the Harford County Executive.) Naturally, MACo will draw a number of other state political figures from both parties since most of them are interested in what the counties have to say. (I daresay there’s a cadre in Annapolis who would rather just run roughshod over them, though.)

The convenience for us locally of having Blaine campaign on the Eastern Shore helps to play up the importance of our region of the state for Republicans. While we have just 7.5% of state voters overall, 1 out of 9 Republicans live in the nine counties which make up the Eastern Shore, and in a primary which promises at least four contenders we can’t be totally ignored in favor of larger counties. Collectively the Eastern Shore is close to the size of several individual counties on the GOP side: Anne Arundel, Baltimore County, and Montgomery. We’ve nearly twice as many GOP voters as Young’s home base of Frederick County. 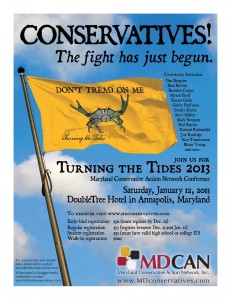 For those who would like to hear Blaine speak more at length in a lecture setting, though, there’s still time to get registered for the Turning the Tides 2013 conference on January 12 in Annapolis. Blaine will be a panelist at the day-long event, with his segment of the day’s proceedings focusing on the “War on the Suburbs: Regional Equity.” (He appears with moderator Marta Mossburg, writer and commentator Stanley Kurtz and Carroll County Commissioner Richard Rothschild to address this topic.)

It’s interesting that those who put together TTT2013 chose that as Young’s topic, though, since he could have also spoken on state government from a small business owner’s perspective as well as spoken on media presence as a radio host. In any case, he’s a welcome addition to the cast.

It’s obvious that Blaine is working hard to get his campaign moving at an early date, which could accrue to his benefit later on. While others are putting together draft campaigns or statements rife with poor writing, Young is out connecting with those who can help him down the road.

One thought on “A chance to meet our next governor?”