On Wednesday night, sliced in among the debate spin on the local news, you may have seen a few sound bites spliced out of the debate held by PACE at Salisbury University. The topic: in-state tuition for illegal aliens – and yes, “illegal aliens” is the correct legal term. 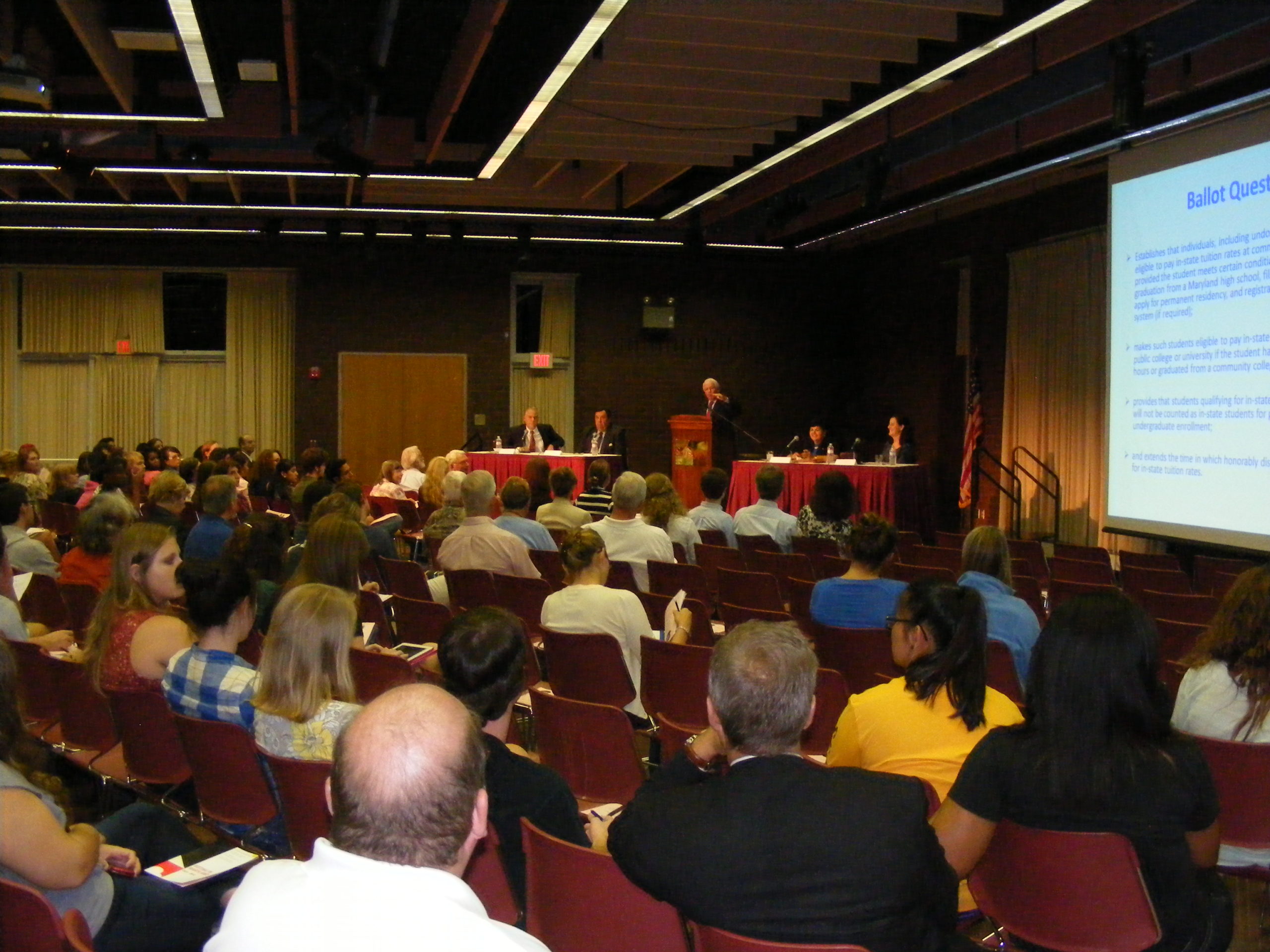 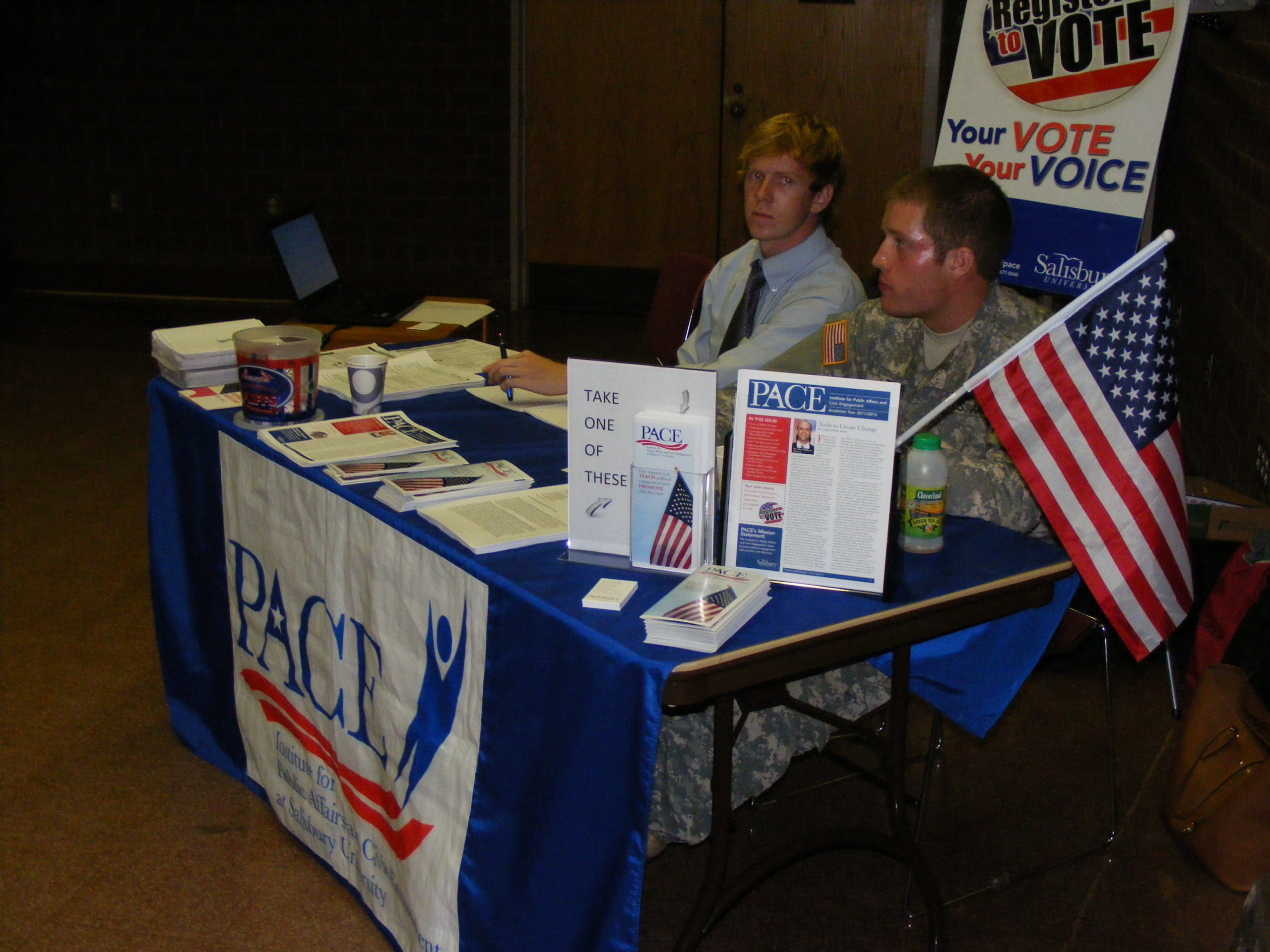 Moderator Fran Kane of PACE was flanked by four participants, two taking the side for Question 4 and two against. Both sides had a Delegate and an expert, with the pro-Question 4 side featuring Delegate Ana Sol Gutierrez of Montgomery County and Kim Propeack of illegal alien advocates CASA de Maryland. The pair against Question 4 were Delegate Pat McDonough of Baltimore County and Bob Dane of FAIR, the Federation for American Immigration Reform. 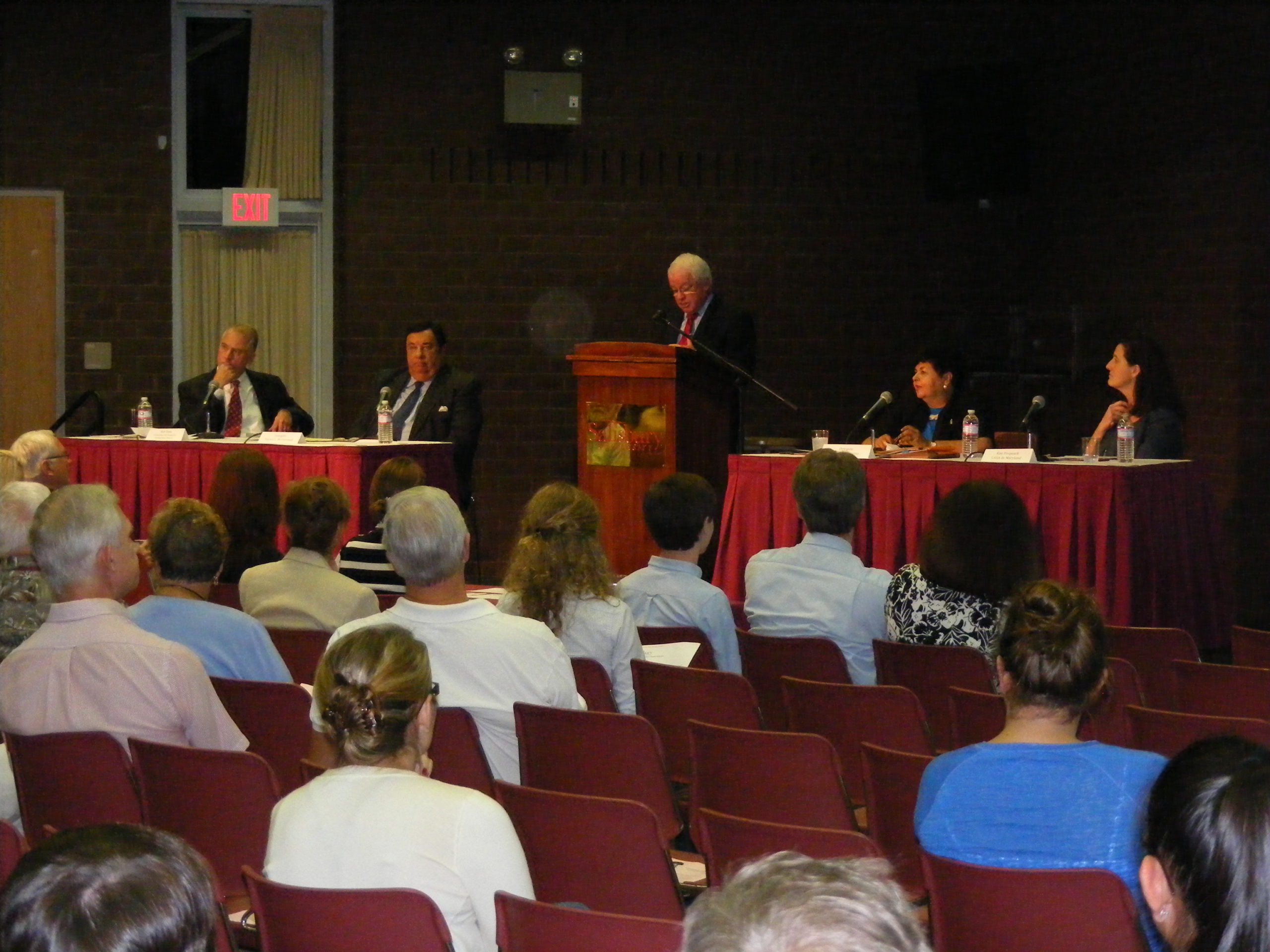 McDonough drew the opening statement for his side, making the case the debate is about another dream: the American dream. While Pat stated he was “firmly and vigorously pro-immigration,” he stated the case based on two principles: the rule of law and economic justice. Regarding the latter, “you will hear a lot of emotional and compassionate arguments” in favor of the law, but warned “you cannot govern a great nation on emotionalism.”

Bob Dane explained the purpose of FAIR, making the brash statement that “we don’t give a damn about business and their addiction to cheap immigrant labor.” The question before us, though, was one of whether to respect the rule of law or bend it to allow lawbreaking. “Being an illegal alien in Maryland is a pretty good proposition,” said Dane.

Speaking for the pro-illegal side, Delegate Ana Sol Gutierrez called the ballot language (which was projected on a screen beside the participants) a “wonderful summary,” claiming “there’s a lot of misinformation out there.” The bill is similar to one vetoed by then-Governor Ehrlich in 2003, Gutierrez continued, and the law applies to those here “through no fault of their own” who graduated from a Maryland high school and enrolled in community college. Moreover, those taking advantage had to have parents who filed their taxes (she started to say “paid” but caught herself) and promised to apply for permanent residency afterward.

Propeack added that the out-of-state tuition was three times the expense, which had to be paid entirely out of pocket because illegals were ineligible for aid. “We can talk about the rule of law,” Propeack countered, “but this law is broken.” Kim went on to emphasize the “diversity of support” the law had; everyone from CASA de Maryland (a “worker justice organization,” as she described it) to the unions which supported the Maryland DREAM Act “without exception.” Even 25 high schools around the state filled with what Kim referred to as “DREAMers” were supporting the ballot issue as well as a row seated within the audience.

At this point, the questions solicited from the audience were asked. It was a little muddled because Kane chose to combine a lot of specific questions into ones which were more broad.

The first question was actually covered in an opening statement, as it asked about financial aid. Gutierrez repeated that illegals weren’t eligible for aid, while Propeack added that those in Guatemala don’t have an in-state option like a Maryland college.

On the other hand, McDonough posited that the discount, which adds up to about $40,000 per student, “doesn’t come out of thin air.” The illegals displaced American students, and if 1,000 students took advantage it would cost the state $40 million per year.

This actually segued well with the next question about economic impact, where Dane asserted if we pass the DREAM Act, it’s only a matter of time before we end up in the same boat as California. It’s an “incentive for more illegal immigration,” Dane said.

Delegate Gutierrez countered that “education is our best investment” and that these students would have an opportunity to become professionals. The illegal population pays $52 million in taxes annually, added Propeack.

When asked about the Obama amnesty, Gutierrez called it an “incredible benefit.” 1.7 million can take advantage of the executive order, with 30,000 of those in Maryland. But there was no legal obligation to become a citizen, countered Dane. Instead, the DREAM Act excuses parents from their responsibility and “one amnesty benefit fuels another round of illegal immigration,” said the FAIR representative.

McDonough also remarked on the subject, reminding the audience that there was no pathway to citizenship yet established for these students.

Propeack responded by saying the impact in California, a state where the DREAM Act is already in effect, has been “very, very small.”

“This is not an immigration bill, it is an education bill,” she added.

In that same vein, answering the next question, Kim asserted that the community colleges could accommodate the students; in fact, the Maryland Association of Community Colleges is the bill’s “strongest supporter.”

Yet Dane claimed that 10 years of illegal immigration in Maryland had seen $32 billion sent away to the various homelands claimed by these workers. And with 30,000 potential students affected by the bill, Dane called it a “falsity that (community colleges) are open enrollment schools.” If they are underfunded it affects access. Moreover, “there has to be a higher principle,” said Bob.

Someone asked why it was important to be a citizen. McDonough said “the most important thing to an American is citizenship.” His fellow Delegate Gutierrez made the more emotional appeal – an immigrant herself, she told us “I would not be here as a citizen under the current laws…now we’ve closed the door.” Propeack made the statement that the law had “nothing to do with status, but the value of education.”

Finally, they were asked whether the state law would violate federal law. Propeack said the issue has been litigated and doesn’t violate federal law. But Dane disagreed, calling the Obama executive order “illegitimate, unconstitutional, and a breach of the separation of powers…the most corrupt use of a social policy.” We allow more immigration than any other country, Dane added. McDonough restated his belief that America needs to reform our immigration policy.

There was a question I had regarding how the veterans were added to the bill. Pat McDonough said that portion was actually introduced as a standalone bill, with the measure then “filled with feelgood stuff that doesn’t really matter.” That’s what I figured.

Each participant made a closing statement.

“The law will win or lose, depending on how you vote,” said Bob Dane. “The glue that holds us together…is the law.” Bob went on to say that “Maryland is heading in the wrong direction,” and concluded “the DREAM Act is an amnesty benefit…parents should not be absolved of lawbreaking.”

“You can’t be like the President and circumvent the law,” said Delegate McDonough. “There are a lot of emotional arguments…you must look at the facts” and not the “Pinocchio language” of the bill. “This is not a Disneyland for illegal aliens,” said Pat.

Delegate Gutierrez repeated her claim that “this bill does not violate any laws.” It showed the pendulum was swinging away from a “strong anti-immigrant climate.” Fairness and tolerance was “intrinsic” in the bill, said Gutierrez.

In her final remarks, Propeack quoted the president of the University of Maryland who stated “the American dream belongs to all of us, or none of us.” 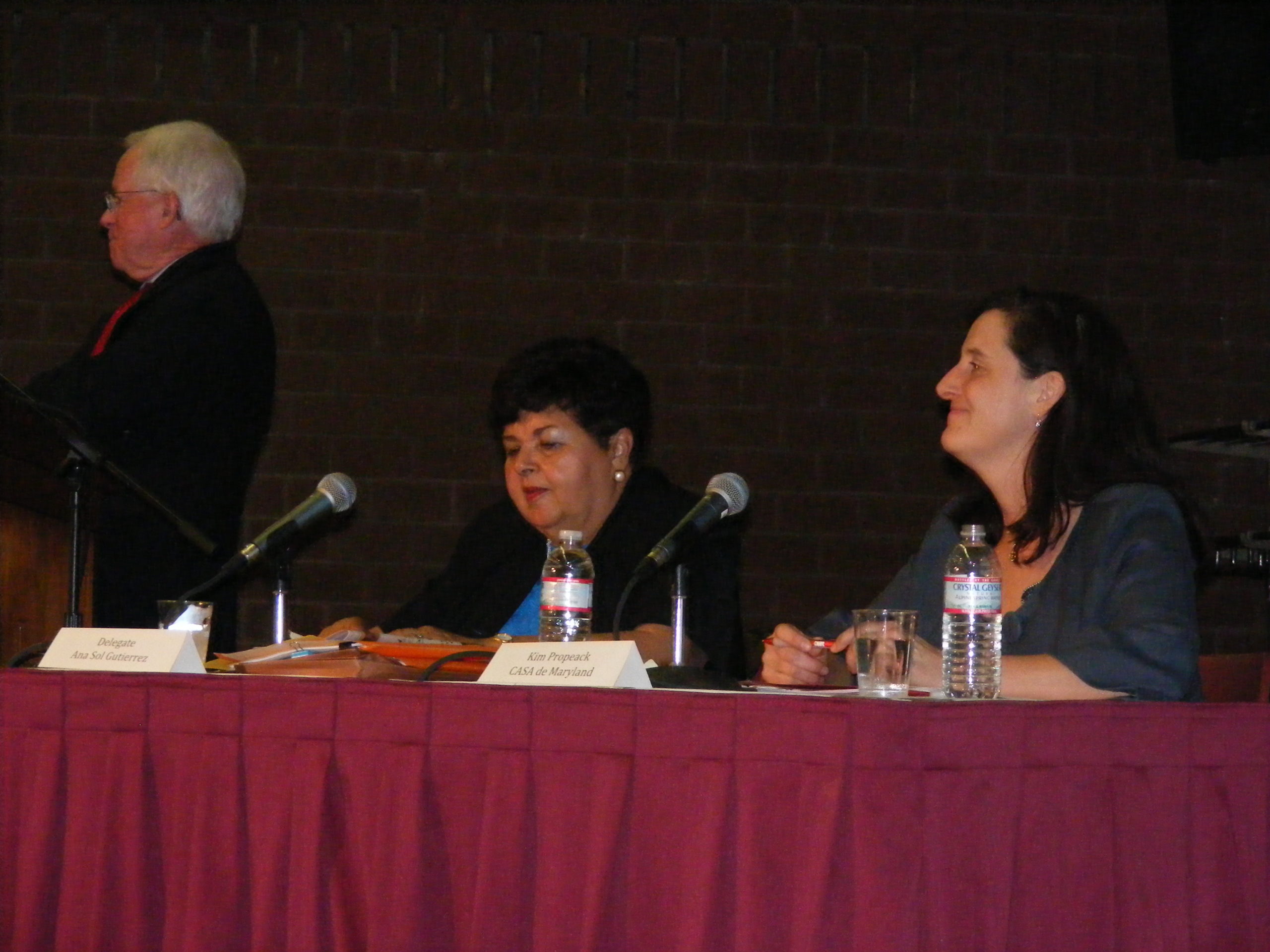 The participants posed for a picture afterward. No, we did not have President Obama. 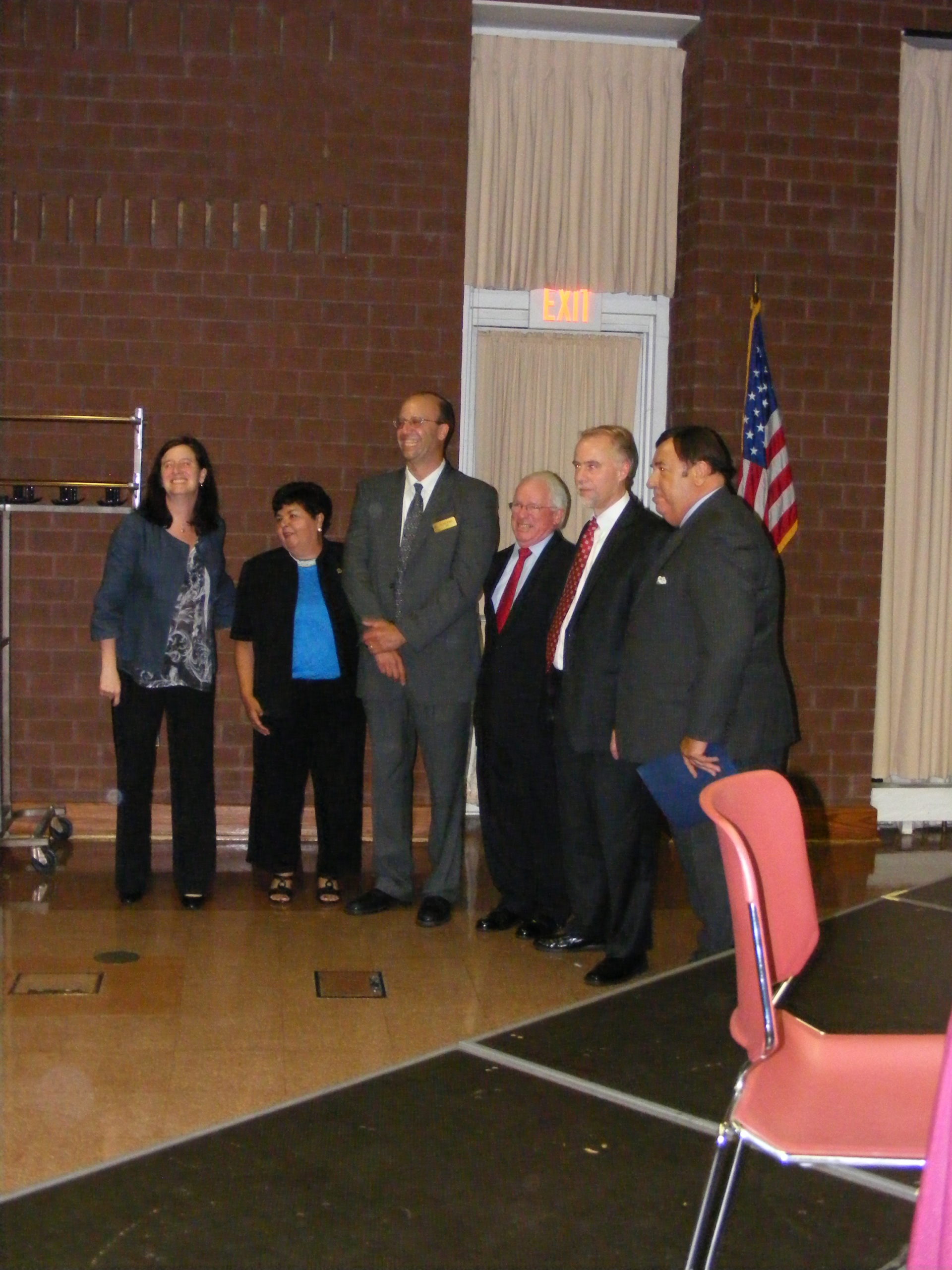 As predicted by McDonough, the side in favor of Question 4 mainly stuck to an emotional appeal, forgetting that these students will cost taxpayers real money the state doesn’t have. It’s true that we need to reform immigration laws, but this is not the direction immigration law should do as it rewards lawbreakers while putting those who did things the correct way at a disadvantage.

I thought this table of literature for support was interesting as well. 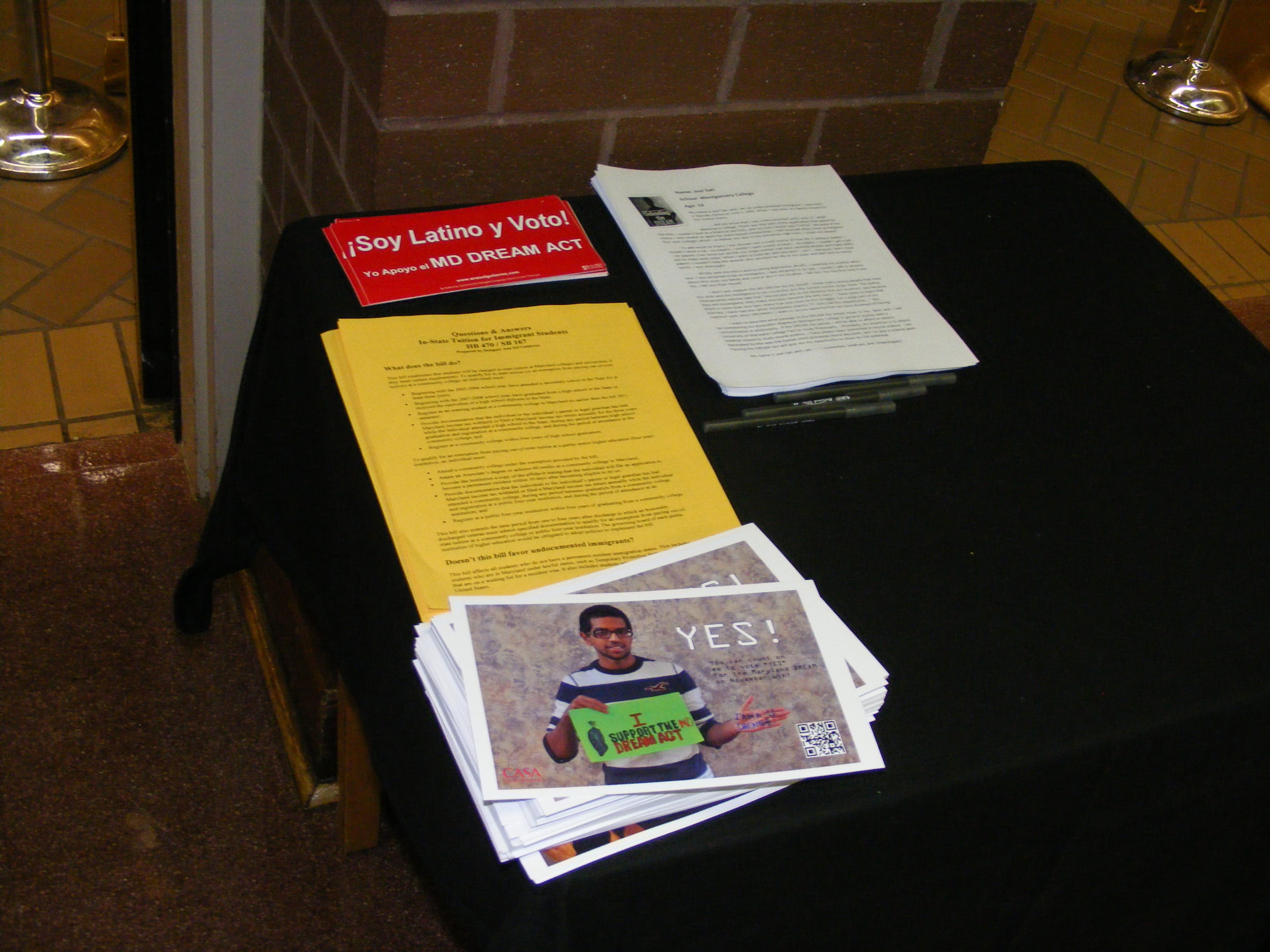 I tried to get a photo of the red bumper stickers up close, but my attempts wouldn’t come out. The reason these were fascinating was the authority line, telling me the stickers were paid for out of Delegate Gutierrez’s campaign funds.

Of course, the next question which will be considered at Salisbury University also depends greatly on emotional appeal for passage. 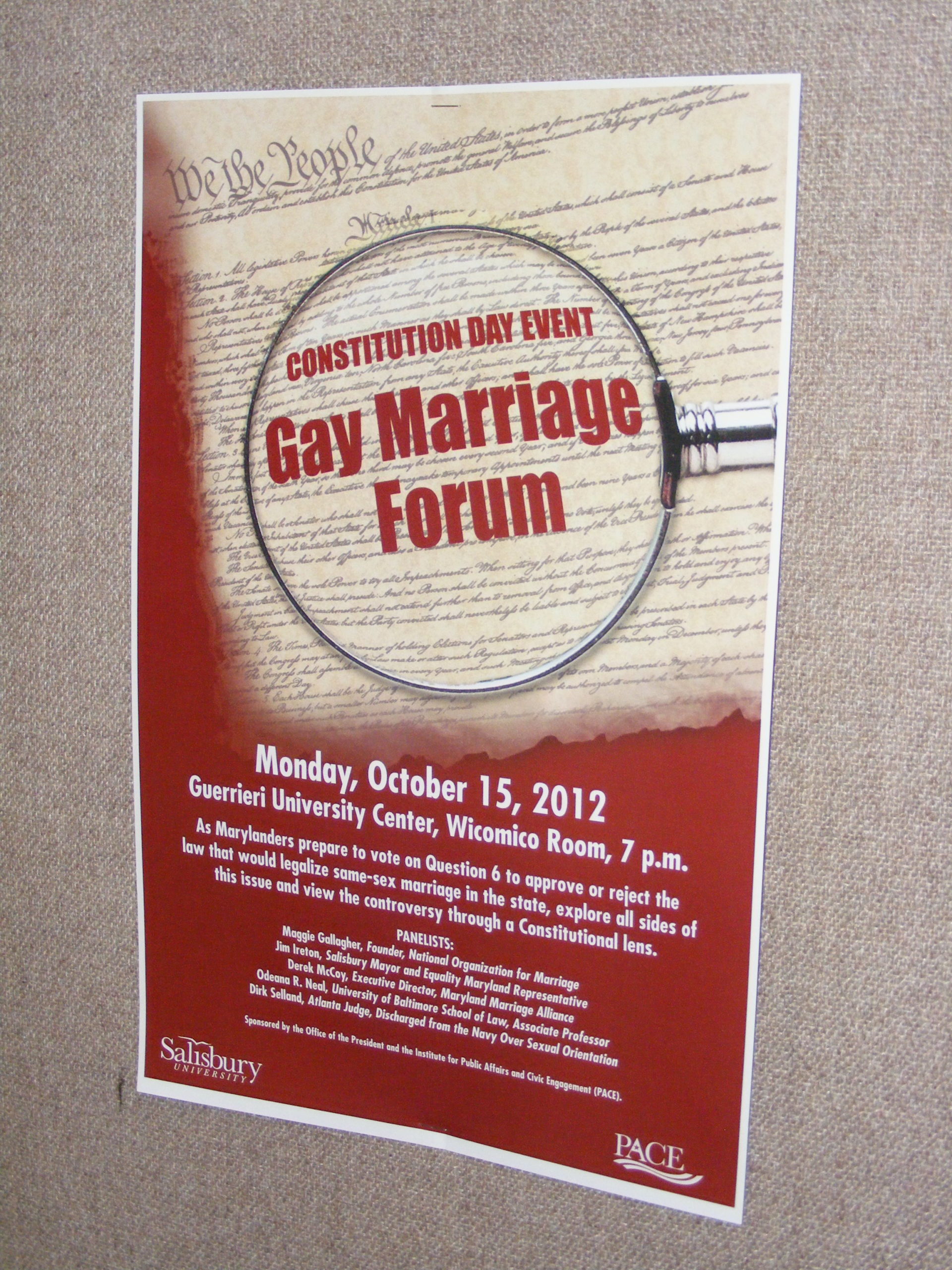 That forum promises to bring a full house, one likely filled with every local LGBT activist that can show up.

One thought on “Illegal alien Question 4 debated at Salisbury University”